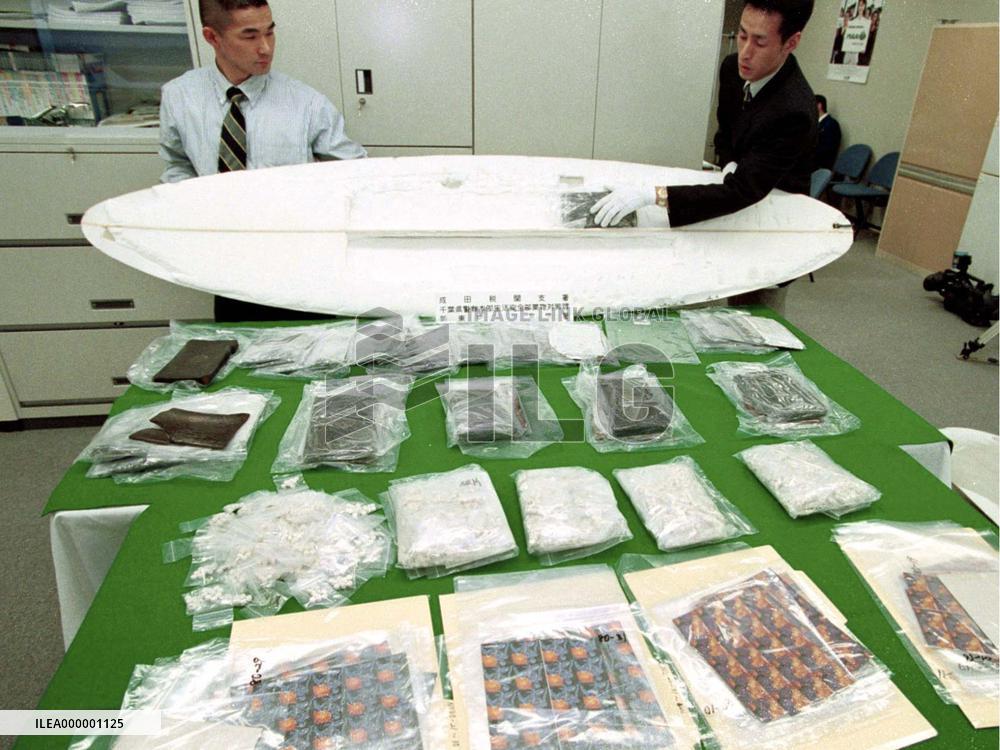 Customs officials show a horde of marijuana, LSD and other drugs allegedly smuggled by a 30-year-old German identified as Andreas Baer. The drugs, hidden in a surfboard Baer was carrying, had a street value of 213 million yen. It was the single largest drug haul at Narita since the airport's opening in 1978. ==Kyodo

STORY: Nigerian anti-drug agency destroys 1.8 tonnes of seized cocaine DATELINE: Sept. 28, 2022 LENGTH: 0:01:19 LOCATION: LAGOS, Nigeria CATEGORY: SOCIETY SHOTLIST: 1. various of NDLEA officers on a raid of drug warehouse 2. various of arrests being made 3. various of seized bricks of cocaine and other drugs 4. various of the evacuation of the seized drugs 5. various of seized drugs being destroyed STORYLINE: Nigeria's anti-drug agency on Tuesday set ablaze 1.8 tonnes of cocaine recovered recently from a warehouse in Lagos, the country's economic hub. Speaking at a ceremony in Lagos, Mohamed Buba Marwa, chairman of the National Drug Law Enforcement Agency (NDLEA), said the volume of the drug haul, with a street value put at more than 278 million U.S. dollars, speaks volumes about the extent of the nefarious activities of the drug underworld. According to a statement by the NDLEA on Sept. 19, the agency stormed a hidden warehouse in the Ikorodu area of Lagos, where 1.8 tonnes of cocaine were recovered and 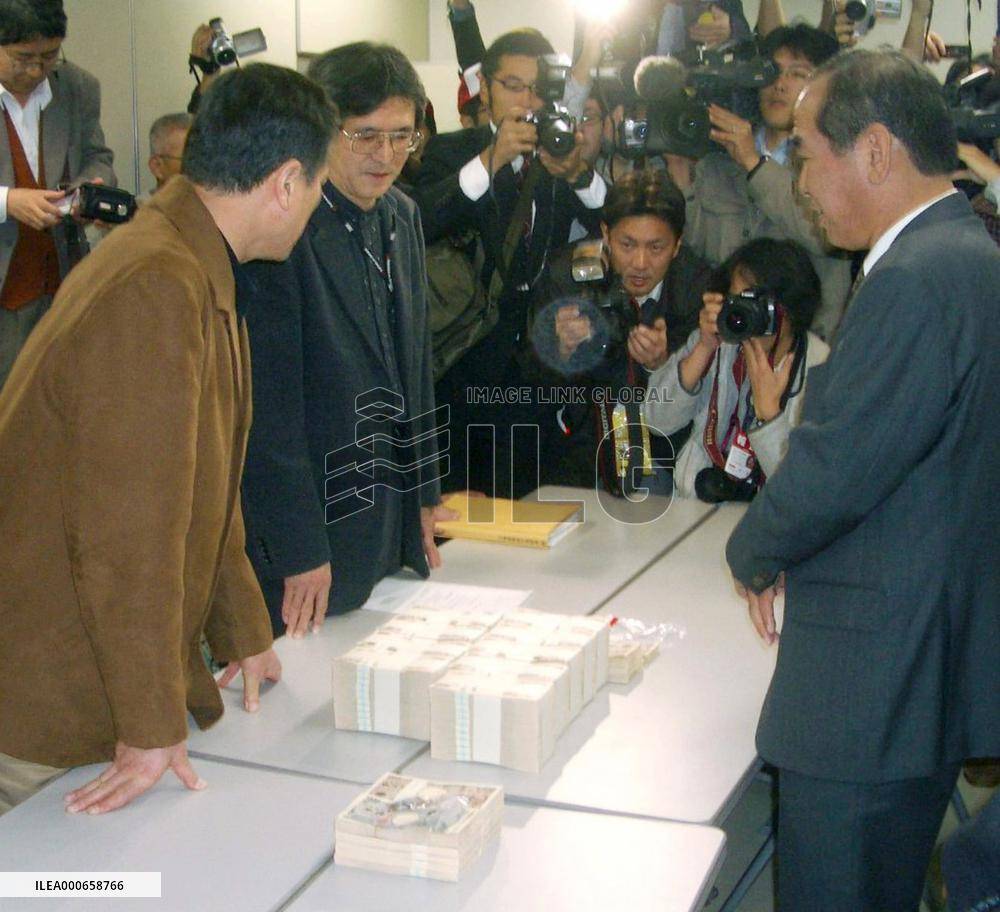 TOKYO, Japan - One of 16 former activists hand 104 million yen in cash to officials at the Civil Aviation Bureau of Land, Infrastructure and Transport Ministry on Nov. 11 in compensation for their 1978 barricading of Narita airport's control tower. The activists had owed the money to the state and the operator of the airport for their occupation of the tower, which was an attempt to block the opening of the airport in Chiba Prefecture constructed after controversial land seizures from local farmers. They said they had received donations from former comrades and sympathizers. (Kyodo) NARITA, Japan - A customs officer explains to the media May 16 how a 49-year-old man claiming to be French has attempted to smuggle about 6 kilograms of cannabis resin into Japan. Jean Lacombe, a resident of Bangkok, was arrested on suspicion of smuggling the cannabis resin, with an estimated street value of 48 million yen, into Narita airport. NARITA, Japan - Displayed for media coverage at the Narita airport customs office Jan. 5 is about 7.4 kilograms of cannabis resin with an estimated street value of 59 million yen which a Turkish man attempted to smuggle into Japan in December. Man nabbed over smuggling drugs in form of folk art

NARITA, Japan - Customs officials at Narita airport in Chiba Prefecture on Dec. 15 show two plaques made of about 9.3 kilograms of cannabis resin. They were allegedly found in the possession of Robin Jenkins, a 41-year-old Dutch man who arrived at the airport from Johannesburg, South Africa, via Singapore on Nov. 27. The haul has a street value of 74.4 million yen. 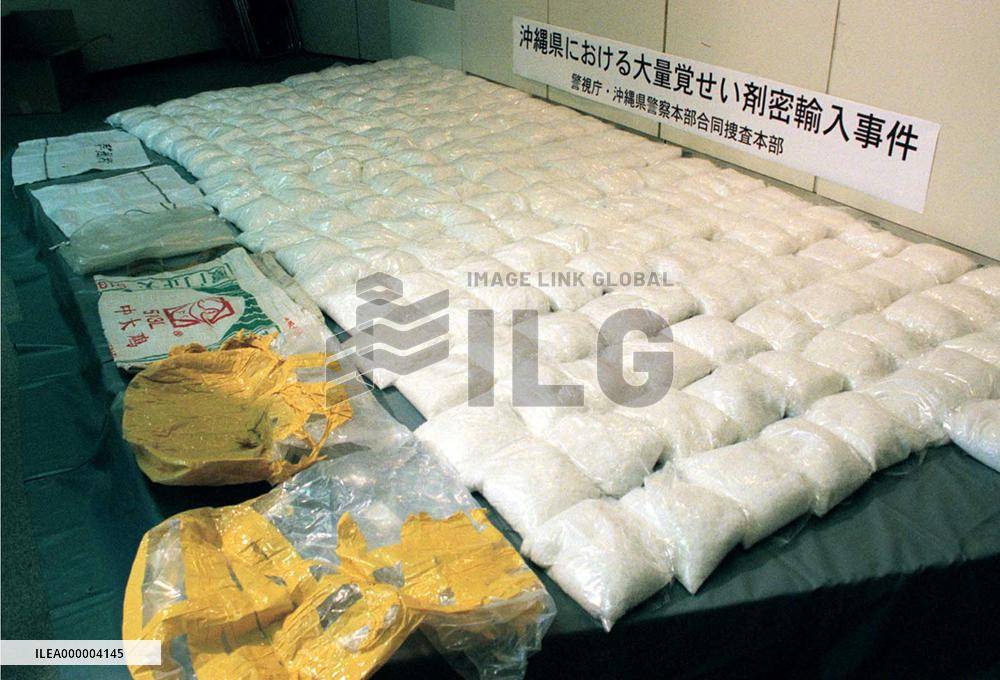 TOKYO, Japan - A total of 218.5 kilograms of amphetamines seized in a drug bust by the Tokyo Metropolitan Police Department are shown in this photo, taken at the department on March 6. Five people were arrested. According to police, the five kept the drugs, with a street value of 13.1 billion yen, in Naha, the capital of Japan's southernmost prefecture of Okinawa.