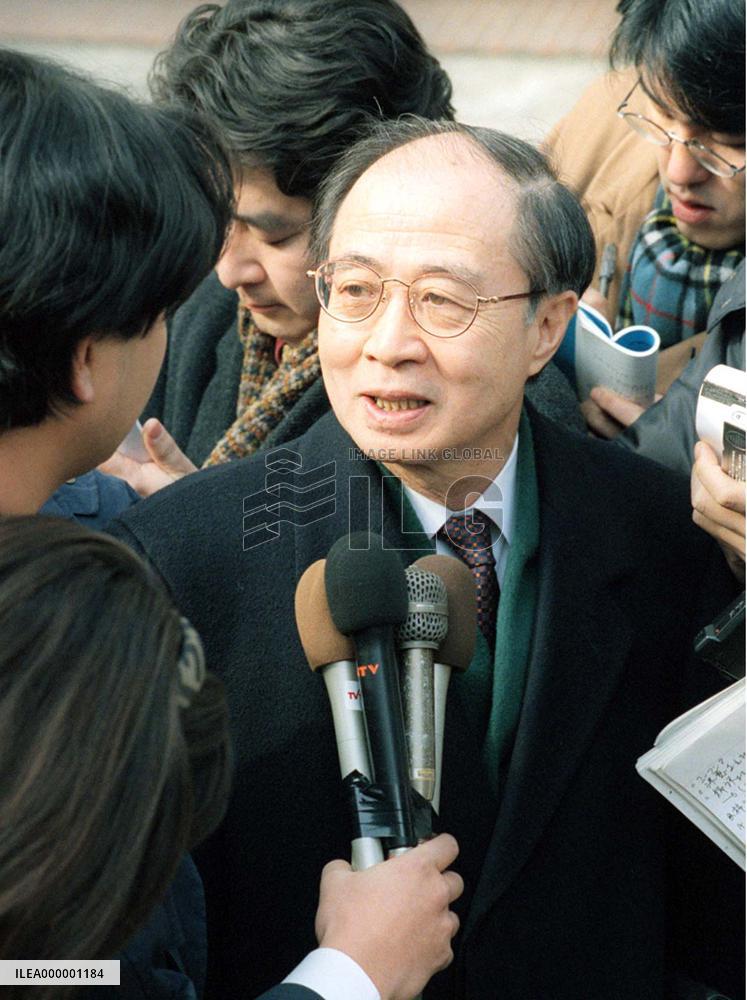 Former U.N. Undersecretary General Yasushi Akashi postpones a scheduled meeting Feb. 15 with Prime Minister Keizo Obuchi following former Foreign Minister Koji Kakizawa's declaration of his candidacy for the Tokyo gubernatorial race. The Liberal Democratic Party (LDP) has asked Akashi to join the race on the LDP ticket. Akashi was expected to tell Obuchi at the meeting whether he will accept the nomination and run in the April 11 gubernatorial election. Reporters are seen surrounding Akashi Feb. 15 in front of his home in Tokyo's Minato Ward. GIFU, Japan - The parents of Tatsuya Ichihashi, the suspect in the 2007 murder of British language school teacher Lindsay Hawker, speak to the press in front of their home in the central Japan city of Hashima, Gifu Prefecture, after Ichihashi's arrest on Nov. 10, 2009. They told reporters they have been praying for Lindsay Hawker every day and hope that their son would expiate his crime. (Kyodo) TOKYO, Japan - Yoshihide Suga, vice chief of the election committee of Prime Minister Taro Aso's Liberal Democratic Party, faces a throng of reporters, photographers and TV crews in a TV interview in front of a board bearing the names of LDP candidates at LDP headquarters in Tokyo on Aug. 30. The LDP suffered a crushing defeat in the House of Representatives election the same day. (Kyodo) TOKYO, Japan - Kazutsugi Nami, chairman of Tokyo-based bedding supplier L&G K.K., known for its own ''Enten'' currency, speaks to reporters in front of a restaurant near his home in Tokyo on Feb. 5, before he was arrested later in the day on suspicion of organizing a scheme to defraud investors. (Kyodo) TOKYO, Japan - Former Defense Minister Yuriko Koike is surrounded by reporters at a hotel in Tokyo on Sept. 4. Koike expressed her readiness to run in the Sept. 22 presidential election of the ruling Liberal Democratic Party, saying ''I'd like to create an environment to run.'' (Kyodo) TOKYO, Japan - Taro Aso, secretary general of the ruling Liberal Democratic Party, addresses a meeting of the party's parliament members at the LDP's headquarters in Tokyo on Sept. 3. Aso has decided to hold a news conference on Sept. 8 to announce his candidacy for the LDP's presidential election, sources close to Aso said. (Kyodo) Koike, others cited as potential candidates for LDP race BEIJING, China - Top U.S. nuclear negotiator Christopher Hill speaks to reporters after a meeting with his North Korean counterpart in Beijing on May 27. Hill said they plan to deal with the crucial question of when Pyongyang would submit a declaration of its nuclear programs when they meet again May 28. (Kyodo)