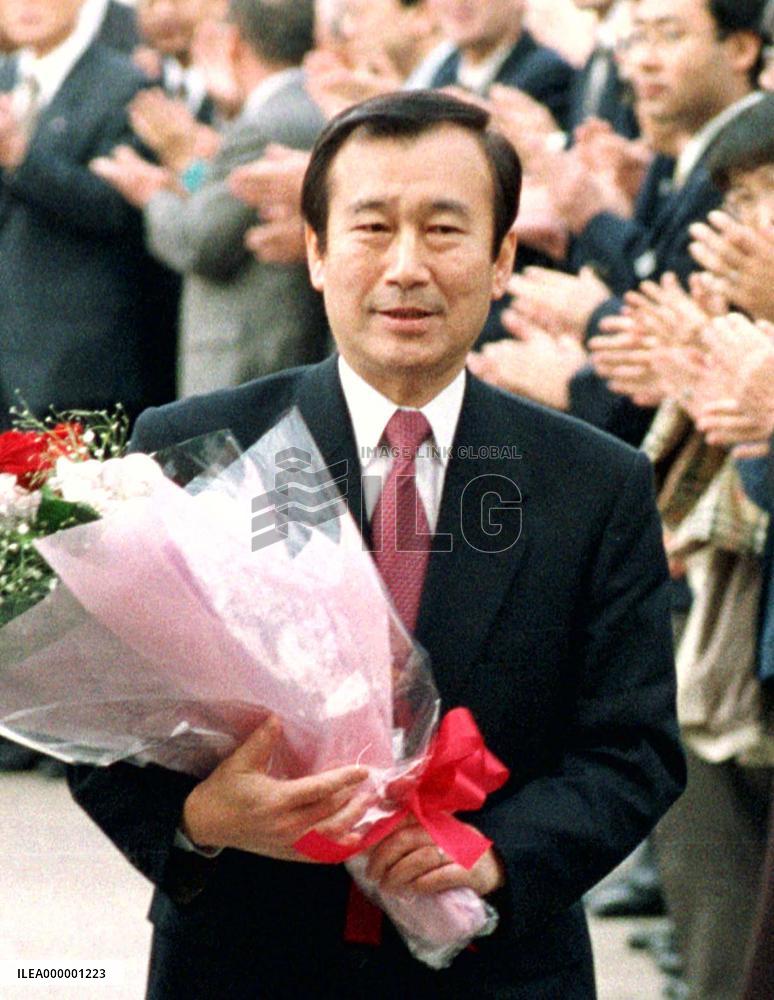 Former Social Democratic Party (SDP) lower house member Tadatoshi Akiba goes into the Hiroshima city hall to start his term in office Feb. 23. Akiba, 56, was elected Hiroshima mayor Jan. 31, running as an independent backed by some SDP city assembly members and labor groups. In January, Akiba gave up his seat in the House of Representatives he had held since 1990 to run in the mayoral election. ==Kyodo

STORY: Thai PM joins new party ahead of general election DATELINE: Jan. 10, 2023 LENGTH: 00:01:55 LOCATION: Bangkok CATEGORY: POLITICS SHOTLIST: 1. various of the party's general assembly STORYLINE: Thai Prime Minister Prayut Chan-o-cha on Monday officially joined the Ruam Thai Sang Chart Party (United Thai Nation Party) to run for this year's general election. At the party's general assembly held at the Queen Sirikit National Convention Center, Prayut was nominated as the party's candidate for prime minister. "While in office, I know the problems that holding Thailand back. If I have another chance, I will put greater effort solving those problems," Prayut said at the event. The Ruam Thai Sang Chart Party, founded in March 2021, is led by Pirapan Salirathavibhaga, current secretary-general to the prime minister. According to Thailand's election law, election candidates must have been in a party for at least 90 days from the date of election. If the House of Representatives finishes its term on March 2

Voting held in India to elect next president

STORY: Voting held in India to elect next president DATELINE: July 19, 2022 LENGTH: 00:01:25 LOCATION: New Delhi CATEGORY: POLITICS SHOTLIST: 1. shot of India Gate 2. various of the president house of India 3. various of the parliament building of India 4. various of the headquarters of BJP, main ruling party in India 5. various of traffic STORYLINE: Voting to elect the next president of India began on Monday across the country as the incumbent president Ram Nath Kovind will complete his five-year term later this week. Elected representatives from Members of Parliament (MPs) and Members of Legislative Assemblies (MLAs) across all the states cast their votes to elect the country's 15th president. The counting of votes is slated to take place on Thursday. Ruling National Democratic Alliance's (NDA) candidate Droupadi Murmu is expected to win the election against the opposition candidate Yashwant Sinha, as NDA had a majority in both the Houses of Parliament and most states' assemblies. Both Murmu and Sinh 'Koizumi's Children' blown away by winds of change

HAMAMATSU, Japan - Satsuki Katayama, one of the 83 Liberal Democratic Party lawmakers who were elected in 2005 for the first time on the back of the popularity of then Prime Minister Junichiro Koizumi, bows to supporters at her campaign office in Hamamatsu, Shizuoka Prefecture, on Aug. 30, 2009, after she was defeated by independent Minoru Kiuchi in the House of Representatives election. Katayama, who was touted by Koizumi as a ''madonna of reform,'' was defeated by Kiuchi, an LDP rebel who voted against Koizumi's postal reform bills and was forced to give up the seat to Katayama at the last election. (Kyodo) NAGOYA, Japan - The Nagoya District Court on Dec. 16 sentences former Democratic Party of Japan lawmaker Kenji Kobayashi (file photo) to two years in prison, suspended for three years, for stimulant drug possession and use. Kobayashi was first elected to the House of Representatives in 2000 and was reelected in 2003. He lost his Diet seat in the Sept. 11 general election. (Kyodo)

TOKYO, Japan - Kenji Kobayashi (in file photo), a former House of Representatives member from the Democratic Party of Japan, was arrested on Sept. 18 on suspicion of possessing stimulant drugs. Kobayashi, 41, lost his Diet seat in the Sept. 11 general election. TOKYO, Japan - Yutaka Takeyama speaks after being elected leader of the assembly of House of Councillors members from the Liberal Democratic Party on Jan. 23. He succeeds Masakuni Murakami who quit last week over his ties with scandal-hit organization KSD. Takeyama, 67, who formerly headed the Science and Technology Agency, will lead the LDP delegation in the 252-seat upper chamber where the ruling party has 106 seats, short of a majority. NAGANO, Japan - About 400 female national and local lawmakers, including Takako Doi, leader of the Social Democratic Party (SDP), open a two-day summit in Nagano on Oct. 29 to boost the number of their comrades in local and national chambers. Doi and former House of Representatives member Tenkoko Sonoda, 81, were among those who spoke about the need for more female lawmakers before an audience of about 1,200 people in the central Japan city. Born March 3, 1924 in Oita Prefecture. Murayama was first elected to the House of Representatives in 1972. He served as prime minister Jan. 30, 1994 to Jan. 11, 1996, leading a coalition government of the Liberal Democratic Party, the Social Democratic Party and the defunct New Party Sakigake. He retired from politics in 2000. Photo was taken February 2000.