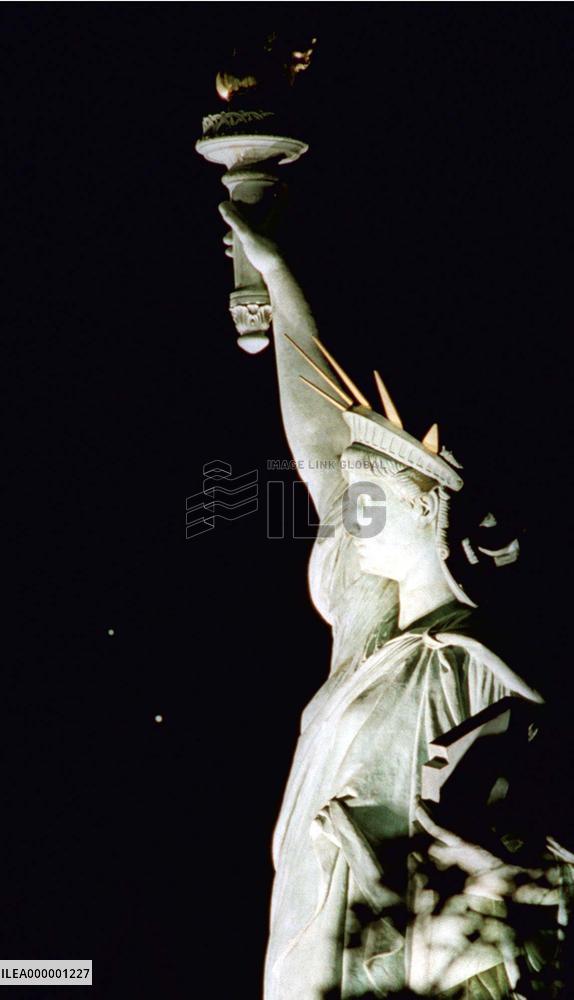 Jupiter, Venus photographed with Statue of Liberty in Tokyo

A Kyodo News photographer successfully captures on film Jupiter (seen as the dot on top) and Venus (the dot below) together with France's Statue of Liberty, which has been on loan to Japan since last spring at Odaiba Marine Park in Tokyo. The photo was taken at 7 p.m. on Feb. 23. The statue came to Japan as the centerpiece of the ''Year of France in Japan'' celebration. ==Kyodo TOKYO, Japan - Actor Masahiro Motoki, who played the lead role in the film ''Okuribito'' (Departures), which won the Oscar for best foreign language film at the 81st Annual Academy Awards, touches the statue during a news conference in Tokyo on Feb. 28. (Kyodo) Temperatures hit July levels in some places in Japan

TOKYO, Japan - Children splash water to cool off at the beach in Odaiba-kaihin-koen seaside park in Tokyo's Minato Ward on Feb. 14 as temperatures reached record highs for February at more than 100 locations throughout Japan. The temperatures shot up sharply in many parts of Japan as a warm air mass flowed in from the south, with the mercury reaching 26.8 C in the city of Shizuoka and 26.1 C in Odawara, Kanagawa Prefecture -- both levels typically seen in early July. (Kyodo) TOKYO, Japan - Haruka (L) and Yukari (R), a Japanese female hip-hop duo HALCALI, perform at New York's Central Park as part of a Japan Day cultural festival. The duo of 20-year-olds from Tokyo made their name when some of their tracks were used as theme songs for a popular TV animation series a few years ago. The photo was taken on June 1, 2008. (Kyodo) AOMORI, Japan - An undated photo of Tomohiro Kato, a suspect in Sunday's stabbing rampage in Tokyo's Akihabara district, taken from his high school album. The 25-year-old temp staf worker at an auto component factory in Shizuoka Prefecture has admitted to hitting pedestrians with a truck and stabbing passersby with a knife at around 12:30 p.m. on Sunday in broad daylight on a street in Tokyo's busy Akihabara electronics district, leaving seven dead and 10 others injured. (Kyodo)

TOKYO, Japan - Tsuneyo Toyonaga (file photo), who has been recognized as Japan's oldest person, died of natural causes in Nankoku, Kochi Prefecture, on Feb. 21. She was 113. She became the nation's oldest person in August last year when the then oldest person, Shitsu Nakano of Fukuoka Prefecture, died at the age of 113 years and seven months. U.S. Marine sent to prosecutors over alleged rape in Okinawa

OKINAWA, Japan - A police car carrying Tyrone Hadnott, a 38-year-old staff sergeant at the U.S. Marine Corps' Camp Courtney, leaves the Okinawa Police Station on Feb. 12. to be sent to prosecutors. According to police, Hadnott raped a 14-year-old girl in a car on a street near a park in the town of Chatan around 10:30 p.m. on Feb. 10. U.S. Marine sent to prosecutors over alleged rape in Okinawa

OKINAWA, Japan - A police car carrying Tyrone Hadnott, a 38-year-old staff sergeant at the U.S. Marine Corps' Camp Courtney, leaves the Okinawa Police Station on Feb. 12. to be sent to prosecutors. According to police, Hadnott raped a 14-year-old girl in a car on a street near a park in the town of Chatan around 10:30 p.m. on Feb. 10. (Kyodo) NAHA, Japan - Photo shows a site where Tyrone Hadnott, a staff sergeant at the U.S. Camp Courtney base in Okinawa Prefecture, is suspected of raping a 14-year-old local girl inside a car parked on a street in the town of Chatan Feb. 10. Hadnott was arrested Feb. 11 after he was found inside his car in front of his house. NARITA, Japan - Sumiyo Tsuzuki, a 40-year-old alpinist from Tokyo who reached the South Pole on skis Jan. 24, poses for a photo on her return to Japan on Feb. 4. (Kyodo) TOKYO, Japan - Senior executives of the Asahi Shimbun apologize at a news conference on Feb. 1 for plagiarism involving a report by an Asahi photographer. The report was attached to a photo in the Jan. 30 evening edition of the Asahi Shimbun and was about the production of ''kammochi,'' a local rice cake delicacy in the town of Tateyama, Toyama Prefecture. The story was similar to an earlier Yomiuri Shimbun story on the same topic. (Kyodo)