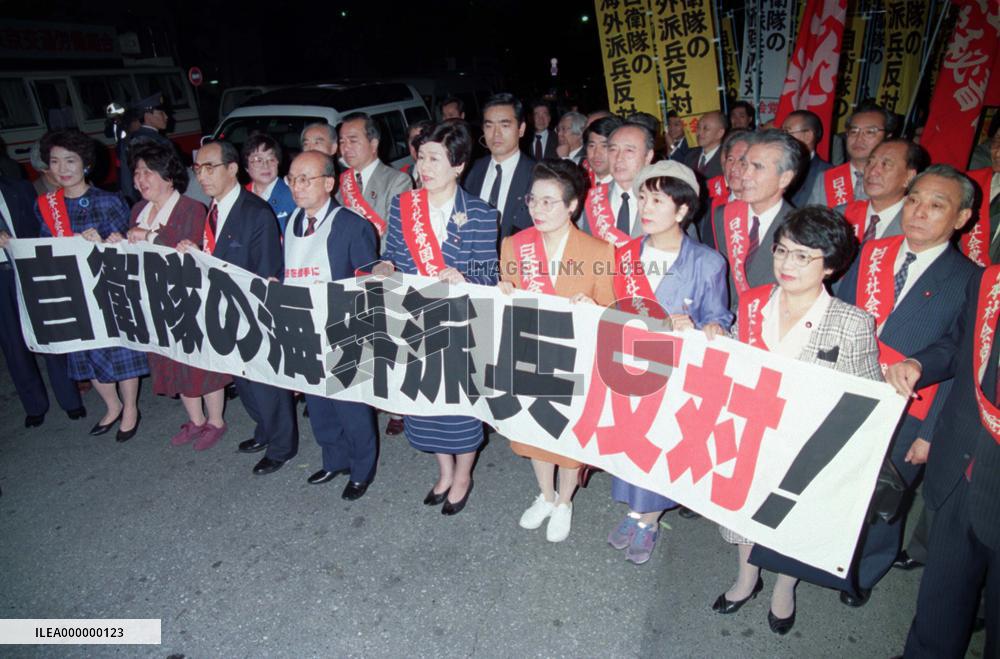 STORY: Former Japanese PM Abe dies after being fatally shot in Nara DATELINE: July 9, 2022 LENGTH: 00:02:01 LOCATION: Tokyo CATEGORY: POLITICS SHOTLIST: 1. various of the shooting scene 2. various of the hospital that received the former prime minister STORYLINE: Former Japanese prime minister Shinzo Abe was pronounced dead on Friday after being shot twice by an ex-Maritime Self-Defense Force (MSDF) worker while he was delivering a speech in the western prefecture of Nara. Abe, 67, died at 5:03 p.m. local time, the hospital that received the former prime minister said at a press conference in the afternoon. Abe, also former leader of the ruling Liberal Democratic Party (LDP), was shot twice from behind at 11:30 a.m. local time by Tetsuya Yamagami, a former worker for the MSDF and resident of the western city while speaking in front of Kintetsu Railway's Yamato-Saidaiji Station, ahead of Sunday's upper house election, local police and firefighters said. The 41-year-old Yamagami, who worked for MSDF for t

STORY: Japan's former prime minister Abe dies after being shot at stump speech DATELINE: July 8, 2022 LENGTH: 00:01:49 LOCATION: Tokyo CATEGORY: POLITICS SHOTLIST: STANDUP(English): ZHANG XIAOYU, Xinhua correspondentvarious of people morning the death of former Japanese prime minister Shinzo Abe STORYLINE: STANDUP(English): ZHANG XIAOYU, Xinhua correspondent "Former Japanese prime minister Shinzo Abe was pronounced dead on Friday after being fatally shot while he was delivering a speech in the western prefecture of Nara." Abe, also former leader of the ruling Liberal Democratic Party (LDP), was shot twice during a speech. He was shot from behind by a former worker from the Maritime Self-Defense Force (MSDF). He was later rushed to a hospital, and passed away there. The hospital said the cause of death was believed to be blood loss. The 41-year-old perpetrator was arrested at the scene for attempted murder and was quoted as telling police he intended to kill Abe as he was "dissatisfied" with the former TOKYO, Japan - Members of labor unions affiliated with the Japanese Trade Union Confederation, or Rengo, hold a ''May Day'' rally in Tokyo's Yoyogi Park on April 28 to voice concern on growing income gaps and to call for the creation of a fair and just society in Japan. Health and labor minister Hakuo Yanagisawa and Democratic Party of Japan leader Ichiro Ozawa addressed the gathering. (Kyodo) TOKYO, Japan - Opposition leader Yukio Hatoyama on Sept. 13 speaks at a lecture at a Tokyo hotel organized by K.K. Kyodo News. Hatoyama, head of the Democratic Party of Japan (DPJ), recommended that Japan's war-renouncing Constitution be revised to legally recognize the Self-Defense Forces (SDF) as a full-fledged military force and that U.S. forces in Japan eventually be withdrawn. TOKYO, Japan - Social Democratic Party (SDP) leader Takako Doi (2nd from L) and SDP members raise their fists at a one-day party convention in Tokyo on July 29. Doi vowed to make her opposition party a force for the ruling camp to reckon with in its drive to safeguard the war-renouncing Constitution.