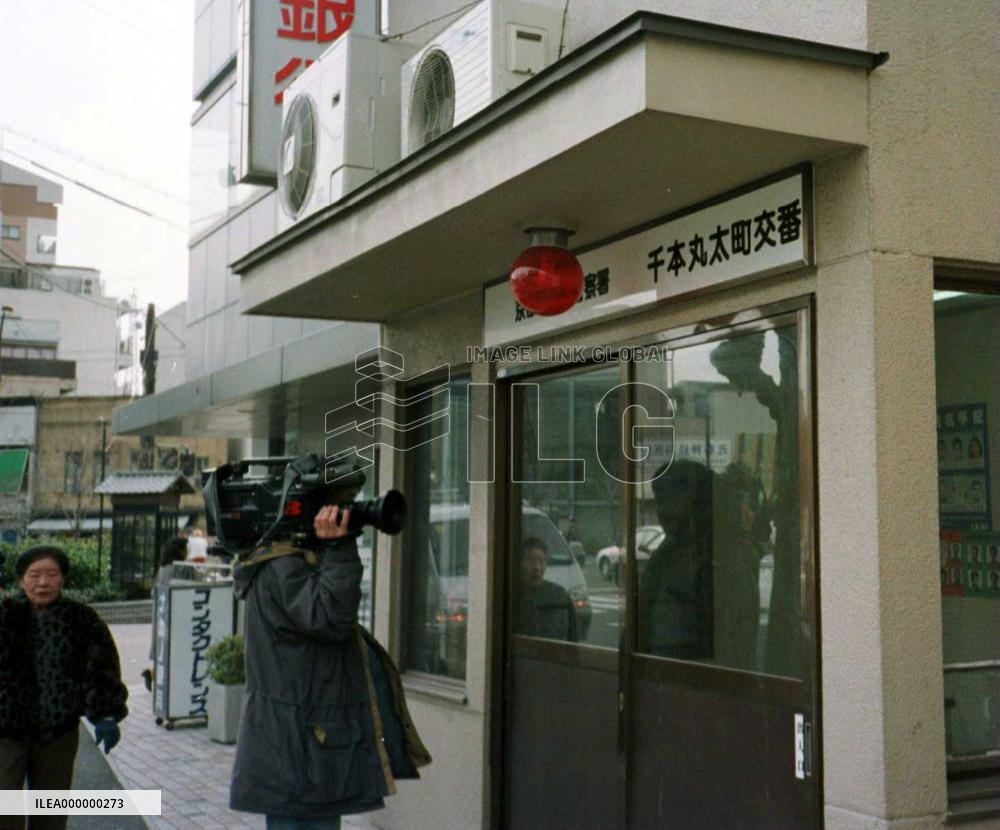 A police box in Kyoto's Nakagyo Ward where a high school boy attacked a policeman on duty in an attempt to take the officer's handgun on March 10. STORY: 2 killed, 24 injured in suicide blast in southwest Pakistan attack DATELINE: Nov. 30, 2022 LENGTH: 00:00:54 LOCATION: Islamabad CATEGORY: OTHERS SHOTLIST: 1. various of the view after blast 2. various of the local police station STORYLINE: A police official told Xinhua that a suicide blast hit a police truck on Wednesday in Quetta, the provincial capital of Pakistan's southwest Balochistan province, killing two people and leaving 24 others injured. Deputy Inspector General of Quetta police Ghulam Azfar Mahesar told Xinhua that a suicide bomber exploded his explosive-laden rickshaw near a truck of the Balochistan constabulary in the Baleli area of Quetta. The impact of the blast toppled the vehicle and pushed it into a ditch beside the road, leaving one policeman dead and 20 others injured, said the officer, adding that the blast also hit two other civilian vehicles and killed one civilian and injured four others. The police, security forces and rescue teams rushed to the site and shifted the bodi

STORY: Palestinian shot dead after lightly injures 8 Israelis DATELINE: Sept. 23, 2022 LENGTH: 00:01:46 LOCATION: Jerusalem CATEGORY: SOCIETY SHOTLIST: 1. various of police officers searching the site while ambulance and rescue workers evacuated the body of the attacker from the site STORYLINE: A Palestinian man was shot dead after slightly injuring eight Israelis by stabbing and spraying pepper gas in central Israel on Thursday night, Israeli police said. The police said in a statement that the incident -- which took place at a major crossroad outside the city of Modi'in, just next to the seam zone between Israel and the occupied West Bank -- was "a terror attack." Eyewitnesses told the state-owned Kan TV news that the suspect approached cars at the junction and attempted to open their doors and stab the people inside. Two people were stabbed and six were sprayed by the suspect, all in minor injuries, Israel's Magen David Adom rescue service said in a statement. An off-duty police officer who (220913) -- MISSISSAUGA, Sept. 13, 2022 (Xinhua) -- A police officer on duty is seen at the scene of double shootings in Mississauga, the Greater Toronto Area, Canada, Sept. 12, 2022. A Canadian police officer was killed on Monday and a suspect is in custody following two daylight shootings in Toronto, the largest city in the country, local media reported. (Photo by Zou Zheng/Xinhua)

STORY: Afghan forces kill 2 militants, arrest 4 in Kabul DATELINE: July 8, 2022 LENGTH: 00:01:13 LOCATION: Kabul CATEGORY: MILITARY SHOTLIST: various of the police on duty in Kabul STORYLINE: Security forces in Afghanistan stormed a hideout of armed militants on the northern edge of Kabul city on Wednesday night, killing two and arresting four others, the Taliban-run administration's chief spokesman Zabihullah Mujahid said Thursday. "The operation of security forces against hideout of Khawarej ( a term used against Daesh or Islamic State group) in 315 localities of Kabul city last night was over by killing two and arresting four others," Mujahid said on his Twitter account. A large number of arms and ammunition of the militants were destroyed or captured by the security forces, Mujahid asserted. The official also noted that the vicious attempt of the militants to kill people had been thwarted. The religious scholars in their three-day jirga or grand assembly that concluded Saturday described th (220707) -- SHANGHAI, July 7, 2022 (Xinhua) -- A police officer directs traffic outside an exam site at Nanyang Model High School in east China's Shanghai, July 7, 2022. The college entrance exam, also known as Gaokao, in Shanghai started Thursday this year. The Shanghai Municipal government has postponed Gaokao of this city for a month due to the latest resurgence of COVID-19 infections. (Xinhua/Liu Ying) (220526) -- CALIFORNIA, May 26, 2022 (Xinhua) -- A police officer works as a crossing guard at an intersection near Fremont Elementary School in Los Angeles County, California, the United States, May 25, 2022. TO GO WITH "Roundup: Southern California authorities on high alert after Texas school mass shooting" (Xinhua)