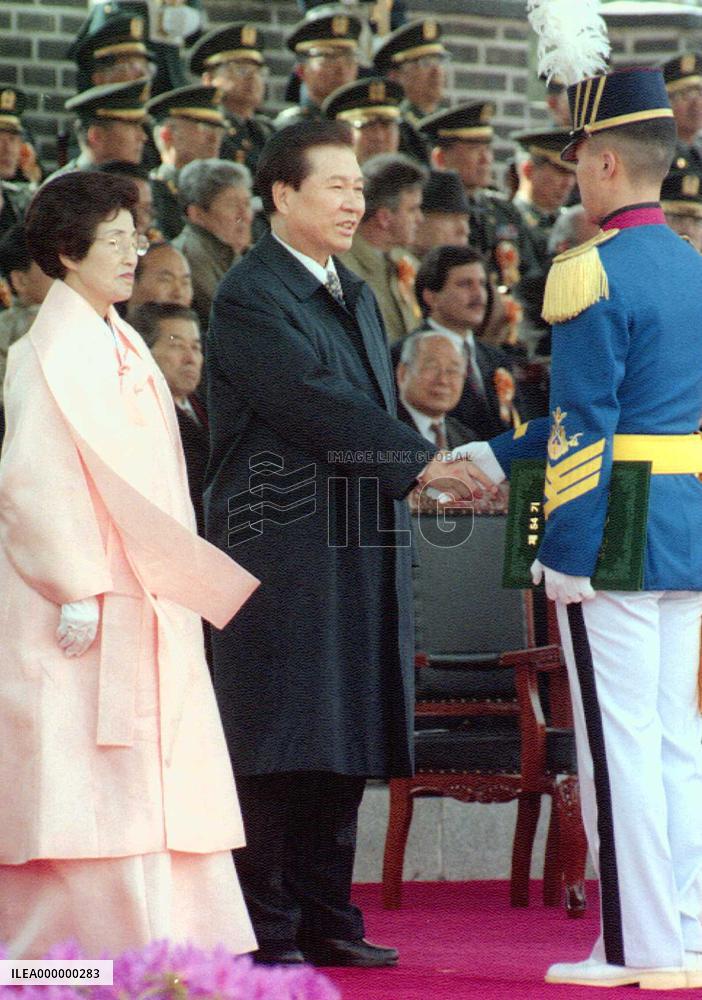 South Korean President Kim Dae Jung (C) shakes hands with a graduate from the Korea Military Academy in a commencement ceremony in Seoul on March 16. In an address at the ceremony, Kim stressed the important role of the U.S. troops currently stationed in South Korea and Japan in preserving peace and the balance of power in Northeast Asia.

STORY: Cambodian ruling party celebrates 71st birthday, vowing to maintain peace DATELINE: June 29, 2022 LENGTH: 00:03:53 LOCATION: Phnom Penh CATEGORY: POLITICS SHOTLIST: 1. various of CPP President and Cambodian Prime Minister Samdech Techo Hun Sen attending the ceremony 2. various of the performance of the ceremony 3. PM Hun Sen speaking 4. PM Hun Sen receiving baskets of flowers 5. various of doves and balloons releasing STORYLINE: The ruling Cambodian People's Party (CPP) on Tuesday marked the 71st anniversary of its birth, vowing to protect peace and political stability for sustainable socio-economic development in the Southeast Asian country. In an address to thousands of party members at the CPP's headquarters in Phnom Penh, CPP President and Cambodian Prime Minister Samdech Techo Hun Sen said that over the past 71 years, Cambodia has gone through many stages of both pride and difficulty as well as extreme danger. "No matter in what the circumstances, the CPP remains committed to its purpos

STORY: Algerian Ambassador to China speaks on BRICS role DATELINE: June 27, 2022 LENGTH: 0:02:07 LOCATION: Beijing CATEGORY: POLITICS SHOTLIST: 1. SOUNDBITE (English): HASSANE RABEHI, Algerian Ambassador to China STORYLINE: Algerian Ambassador to China Hassane Rabehi said that BRICS gives a good example on how countries can serve peace, security, stability, prosperity, and development. Hassane Rabehi attended the opening ceremony of the BRICS Business Forum held last week. SOUNDBITE (English): HASSANE RABEHI, Algerian Ambassador to China "We have been very happy to attend this forum, which is BRICS Business Forum. It's a gathering of emerging countries which are giving a good example on how best countries being together, they can serve peace, security, stability and prosperity, and development. I would like also to seize this opportunity to express our high appreciation for what China did towards her own people, but also people in the world by making a big donation in terms of vaccines which help many co

Italy "called on" for key role in post-conflict peace in Ukraine: president

STORY: Italy "called on" for key role in post-conflict peace in Ukraine: president DATELINE: June 7, 2022 LENGTH: 00:00:50 LOCATION: Rome CATEGORY: POLITICS SHOTLIST: 1. various of the ceremony 2. various of Italian President Sergio Mattarella speaking STORYLINE: Italian President Sergio Mattarella said Monday Italy is "called on" to play a key role in ensuring peace is maintained once the conflict in Ukraine draws to a close. The head of state spoke during a ceremony to celebrate the 208th anniversary of the founding of the Carabinieri, Italy's special paramilitary police. Mattarella said the Ukraine crisis "is undermining the foundations of coexistence in the world," adding that Italy will be "called on to ensure peace, security and progress" when the Russia-Ukraine conflict is over. Pramila Patten, the UN secretary-general's special representative on sexual violence in conflict, warned Monday the humanitarian crisis in Ukraine is turning into a human trafficking crisis. Patten called for a coh

Xi calls for keeping Asia's future in the region's own hands

STORY: Xi calls for keeping Asia's future in the region's own hands DATELINE: April 21, 2022 LENGTH: 00:00:39 LOCATION: Beijing CATEGORY: POLITICS SHOTLIST: 1. SOUNDBITE (Chinese/English interpretation) XI JINPING, Chinese President STORYLINE: Asia should always keep the region's future in its own hands, said Chinese President Xi Jinping on Thursday while delivering a keynote speech via video at the opening ceremony of the Boao Forum for Asia Annual Conference 2022. "Peace and stability in our region does not fall into our lap automatically or come as charity from any country," Xi stressed. "Rather, it is the result of the joint efforts of countries in the region." Xi said the Five Principles of Peaceful Coexistence and the Bandung Spirit, first advocated by Asia, are all the more relevant today. He urged honoring the principles of mutual respect, equality, mutual benefit and peaceful coexistence, following a policy of good-neighborliness and friendship, and making sure that Asia always keeps its future

STORY: Shahbaz Sharif takes oath as 23rd prime minister of Pakistan DATELINE: April 12, 2022 LENGTH: 0:01:02 LOCATION: Islamabad CATEGORY: POLITICS SHOTLIST: 1 various of the oath-taking ceremony STORYLINE: Shahbaz Sharif took the oath as the 23rd Prime Minister of Pakistan during a ceremony held at the President House Monday night. Chairman of Pakistan's Senate Sadiq Sanjrani administered the oath of office to the newly-elected prime minister as Pakistani President Arif Alvi "complained of discomfort." During the National Assembly session to conduct the election for the Asian country's new prime minister Monday afternoon, Shahbaz, president of the Pakistan Muslim League-Nawaz, won 174 votes in the 342-member house. Shahbaz came to power after former Prime Minister Imran Khan was ousted through a no-confidence motion moved by an opposition alliance. In his maiden address to the National Assembly after being elected as the prime minister, Shahbaz said he is looking forward to having friendly 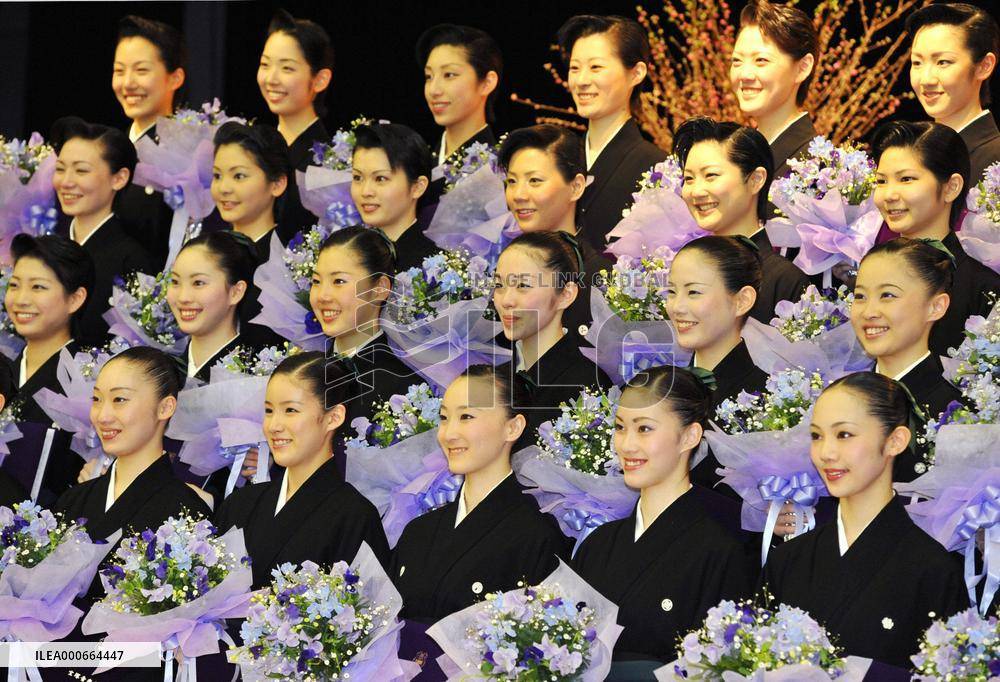 TAKARAZUKA, Japan - A total of 38 women at Takarazuka Music School, Japan's unique all-girl music academy, pose in their dark-green Japanese ''hakama'' skirts and black kimono called ''montsuki'' for a commemorative photo after a commencement ceremony at the academy in Takarazuka, Hyogo Prefecture, on March 1, 2010. After completing their two-year program at the school, they will join the renowned Takarazuka Revue and make their debut in a performance on April 16. (Kyodo) TAKARAZUKA, Japan - The class of 2009 at Takarazuka Music School, Japan's unique all-girl music academy, pose in their dark-green Japanese ''hakama'' skirts for a commemorative photograph before the commencement ceremony at the academy in Takarazuka, Hyogo Prefecture on March 2. After completing their two-year program at the school, the 45 students joined the renowned Takarazuka Revue as professional actresses-in-the-making and will make their debut in a performance on April 17. (Kyodo) 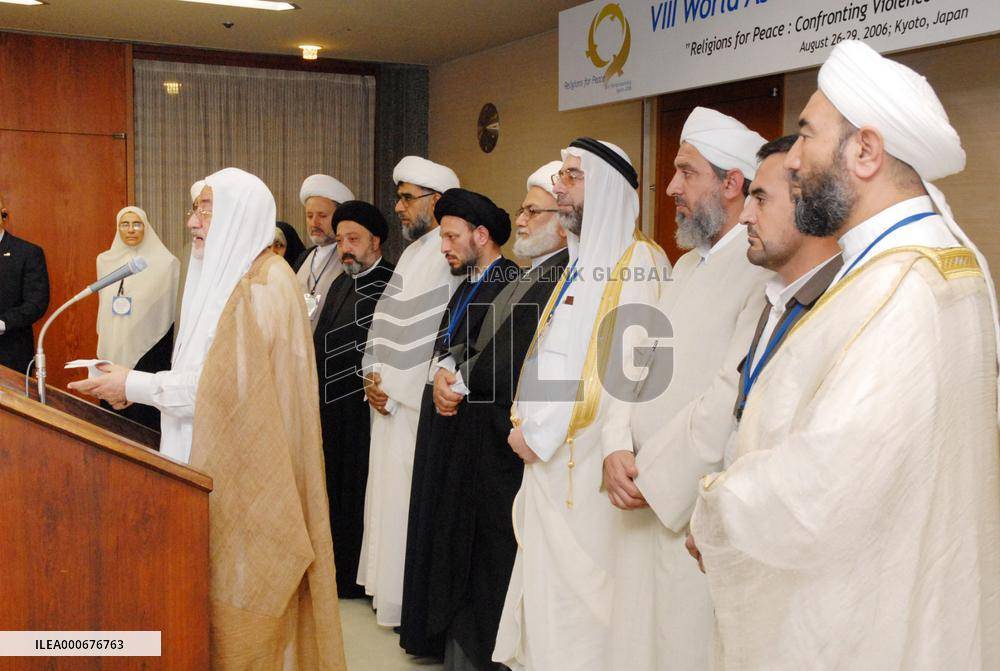 KYOTO, Japan - More than a dozen Muslim leaders, including Sunnis and Shiites, issue a joint statement calling for peace in Iraq at the World Conference of Religions for Peace in Kyoto on Aug. 29 before the closing ceremony for the four-day meeting. (Kyodo)