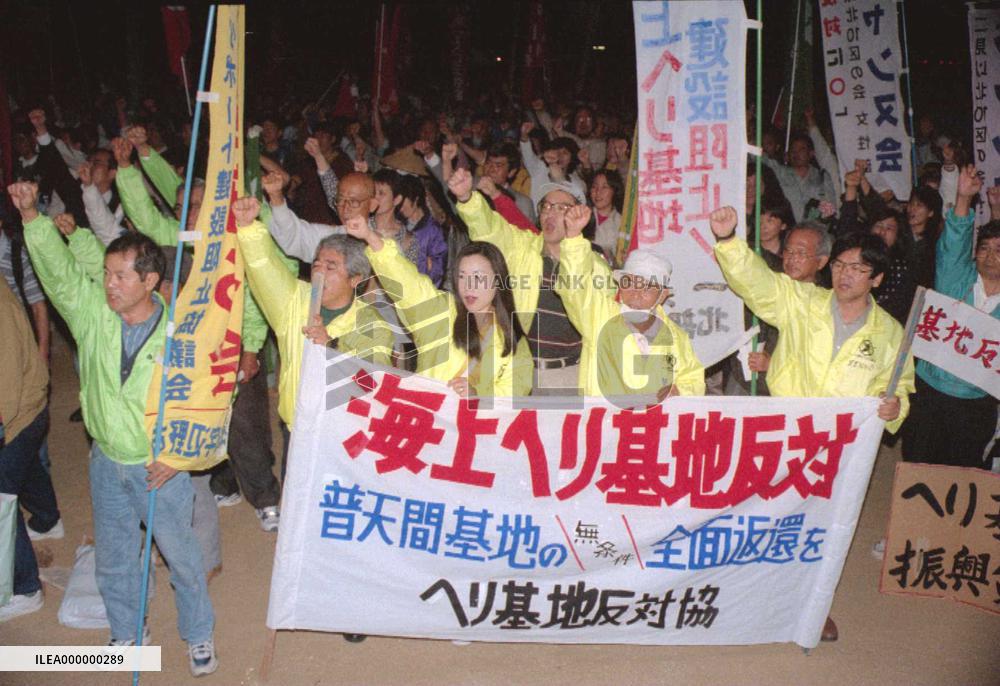 Okinawan activists opposed to the construction of a an offshore heliport for the U.S. military hold a rally in Yoji Park in the Okinawa prefectural capital of Naha on March 24. They also demanded an unconditional return of the Futemma U.S. air base. The Japanese government plans to construct the heliport in exchange for the return of the air base to Japan. 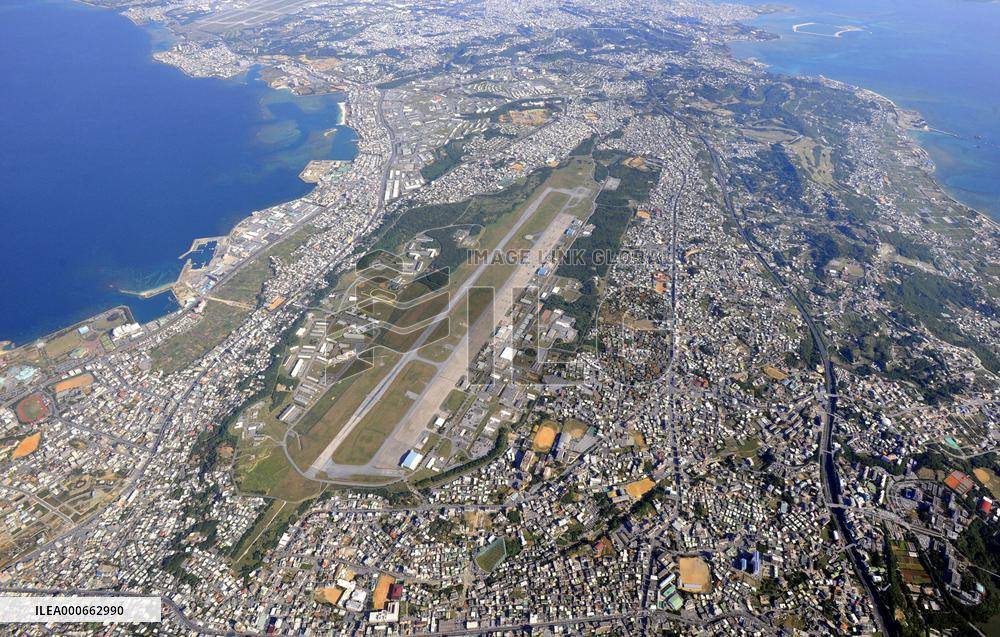 NAHA, Japan - Photo taken Dec. 23, 2009, shows the U.S. Marine Corps' Futemma Air Station in the densely populated area in Ginowan, Okinawa Prefecture. The Japanese government plans to decide the fate of the base by the end of May. (Kyodo) 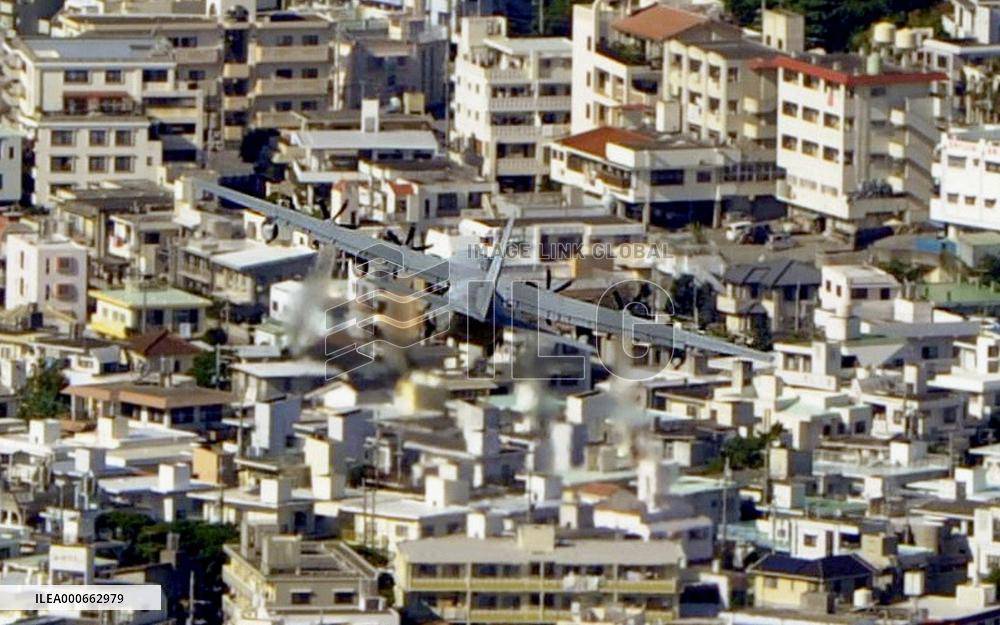 NAHA, Japan - A U.S. military airplane flies over the densely populated area near the Marine Corps' Futemma Air Station in Ginowan, Okinawa Prefecture, on Dec. 23, 2009. The Japanese government plans to decide the fate of the base by the end of May. (Kyodo) 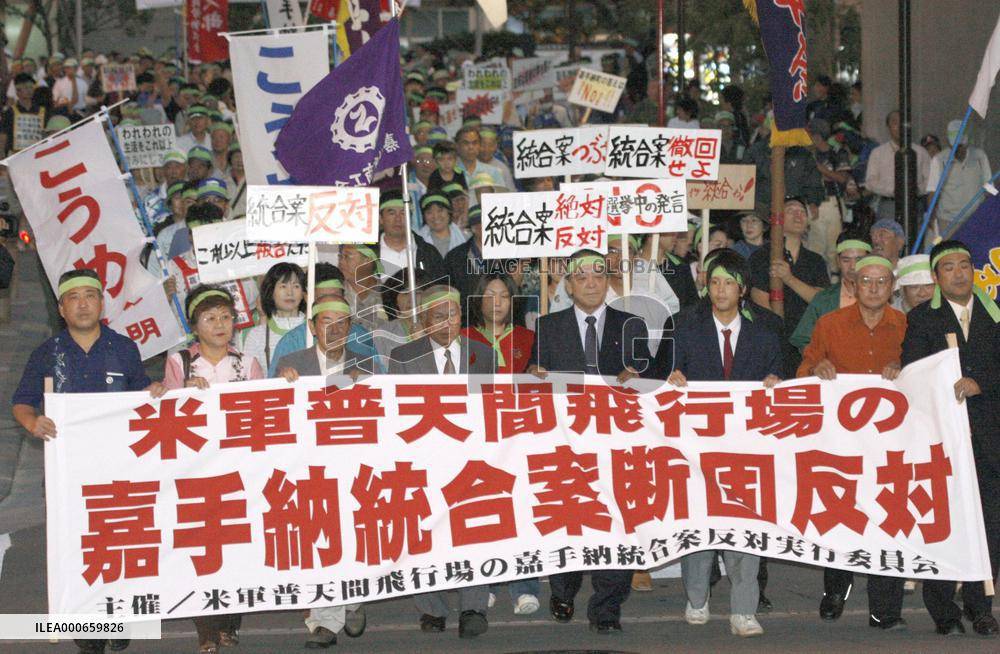 Locals protest Okada's idea to transfer U.S. base to Kadena

KADENA, Japan - Over 2,000 people march through the town of Kadena, Okinawa Prefecture, on Nov. 7, 2009, in protest over Foreign Minister Katsuya Okada's remarks that merging the heliport functions of the U.S. Marine Corps' Futemma Air Station with the nearby Kadena Air Base is an option. (Kyodo) 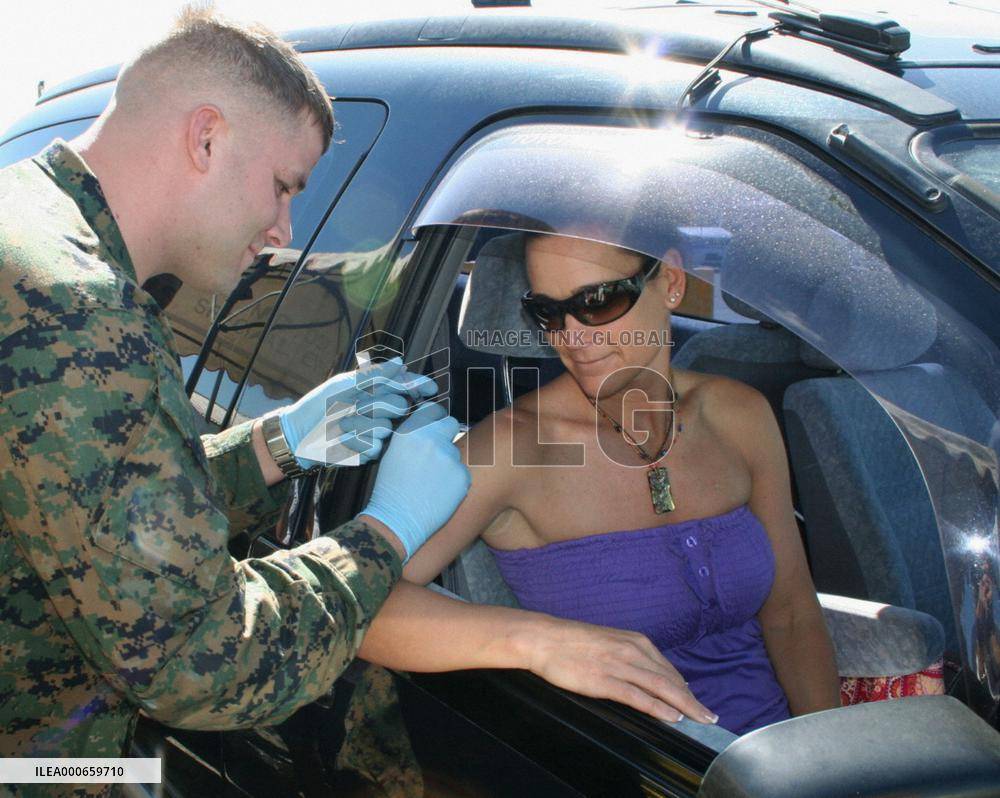 GINOWAN, Japan - A woman gets a seasonal influenza shot at a drive-through vaccination station set up in the U.S. Marine Corps' Futemma Air Station in Ginowan, Okinawa Prefecture, on Nov. 6, 2009. U.S. Marines and their family members receive the shots at the station in a process lasting just 20 minutes, including a simple health checkup and follow-up monitoring, an official in charge of vaccination said. (Kyodo) 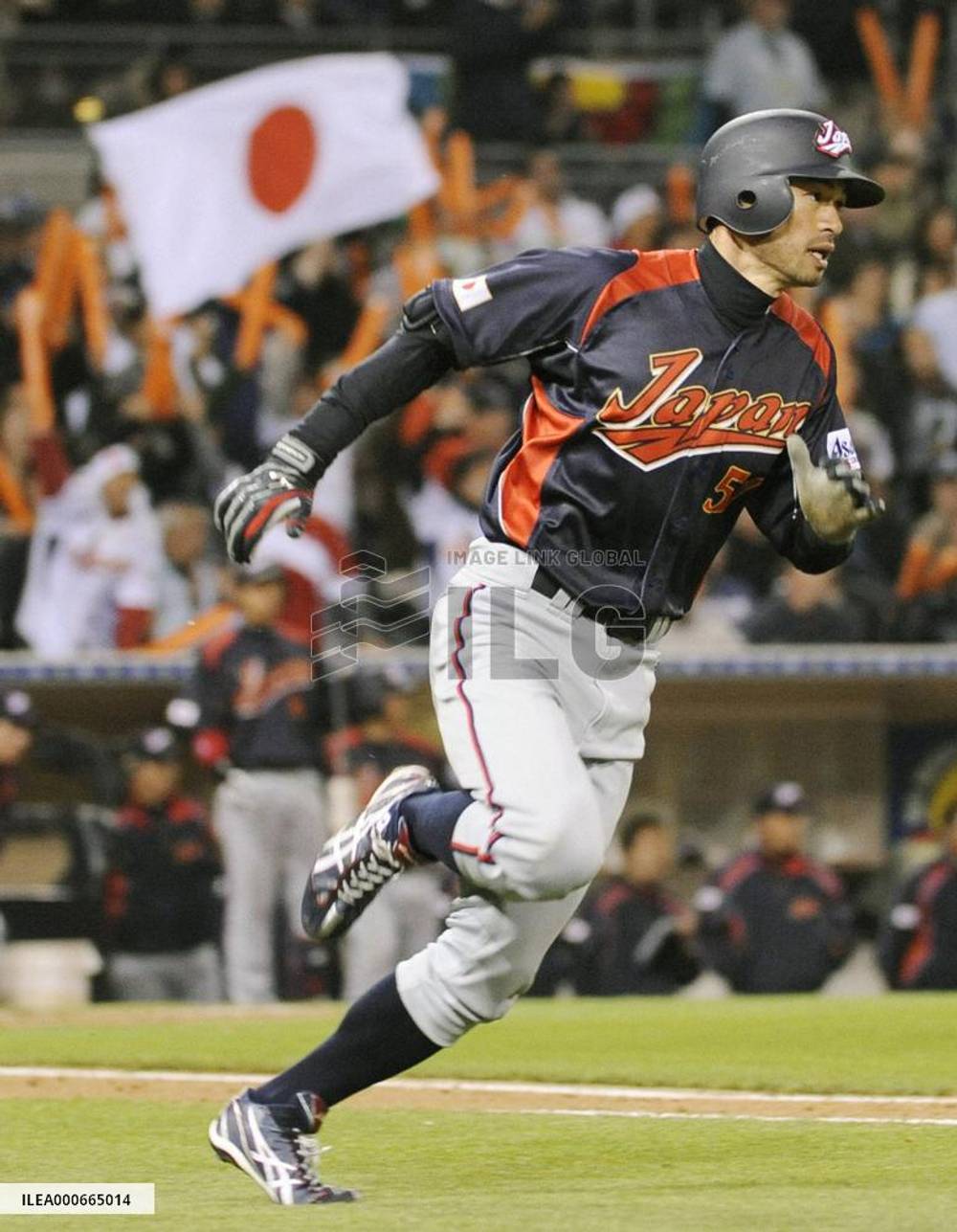 Japan beats S. Korea 6-2 to set up semifinal with U.S.

SAN DIEGO, United States - Japan's Ichiro Suzuki runs to first base after hitting a double to right-center in the ninth inning of a game against South Korea to determine the winner of their second-round pool of the World Baseball Classic at PETCO Park in San Diego on March 19. Japan won 6-2 and will play against the United States in Los Angeles on March 22 in the WBC semifinals. (Kyodo) 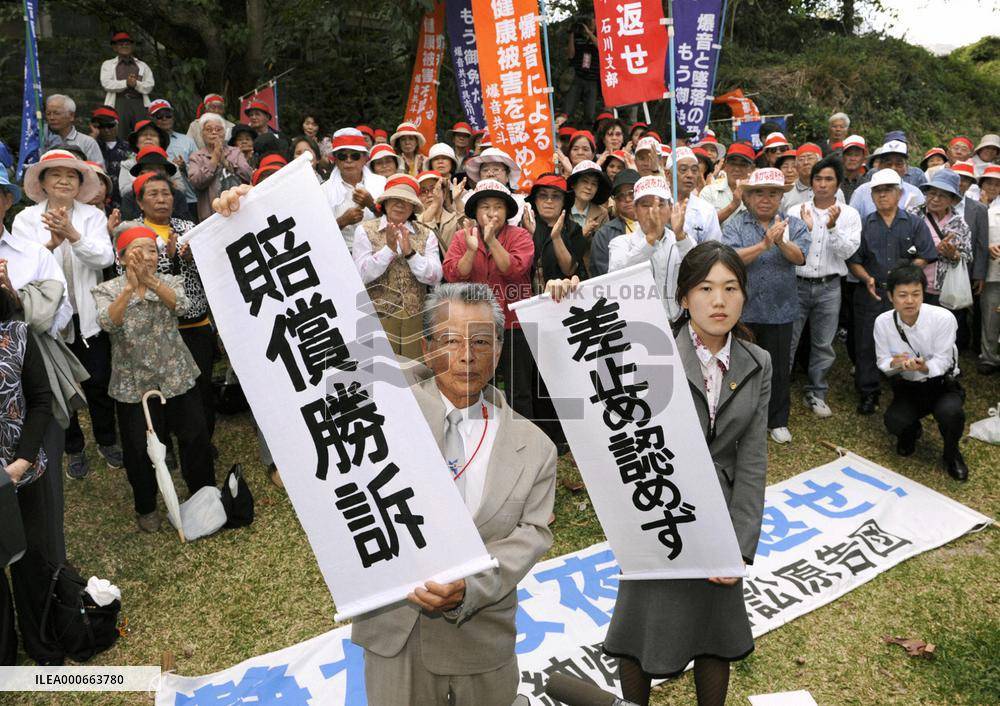 NAHA, Japan - Plaintiffs in a damages suit over noise from the U.S. Kadena Air Base in Okinawa Prefecture show mixed reactions in Naha to a ruling the Fukuoka High Court handed down Feb. 27. A man holds a banner saying in Japanese ''We win damages'' (L) while a woman shows one saying ''Court not banning (flights).'' The court awarded about 5.62 billion yen in damages to noise-hit residents but turned down the plaintiffs' demand for a ban on night-to-early morning flights at the base. (Kyodo) 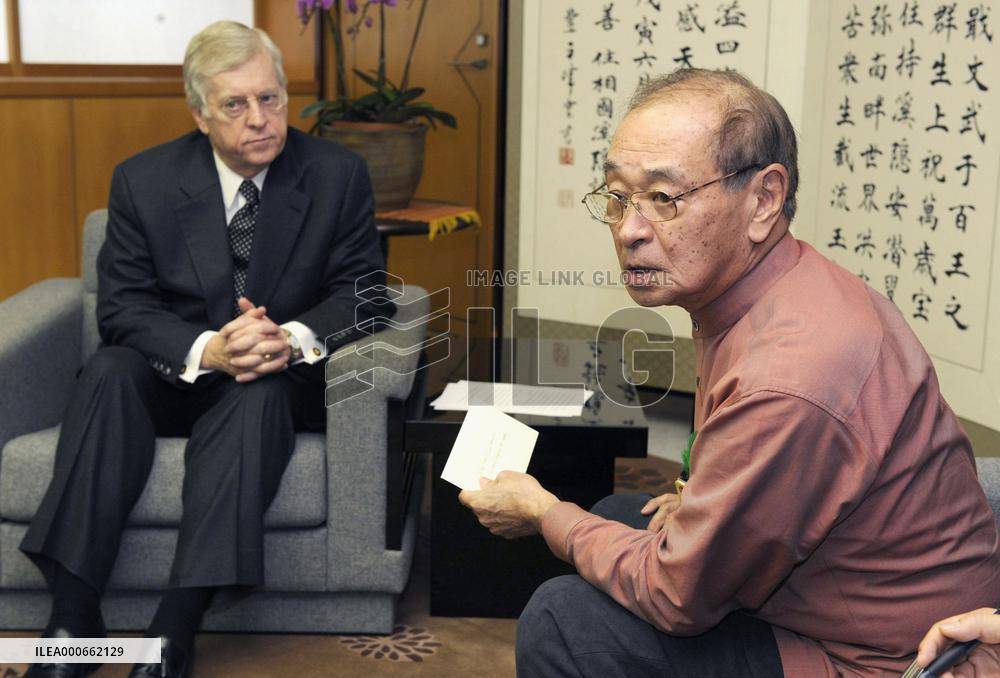 Protests spreading in Okinawa over alleged rape by U.S. Marine

NAHA, Japan - Okinawa Governor Hirokazu Nakaima (R) receives a letter from U.S. Ambassador to Japan Thomas Schieffer during their meeting at the Okinawa prefectural government in Naha on Feb 13. Schieffer asked Nakaima to deliver the letter, which expresses his sympathy to a 14-year-old girl who was allegedly raped by Tyrone Hadnott, a 38-year-old staff sergeant at the U.S. Marine Corps' Camp Courtney, on Feb. 10, and her family. (Kyodo) 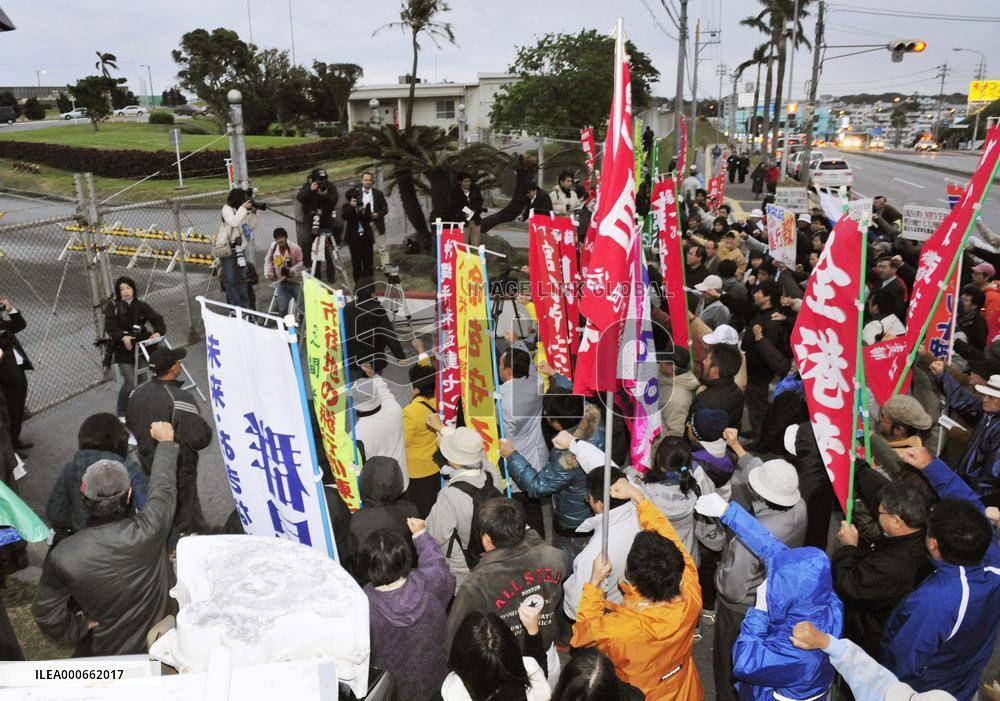 KITANAKAGUSUKU, Japan - Okinawa residents hold a rally in front of Camp Zukeran, the U.S. Marine Corps Base Headquarters in central Okinawa, on Feb. 12 to denounce the alleged rape of a 14-year-old Okinawa girl by a U.S. Marine. Marine Staff Sergeant Tyrone Hadnott, 38, was referred to public prosecutors in Okinawa on Feb. 12, a day after he was arrested by Japanese police. The suspect has denied that he raped the girl. (Kyodo) 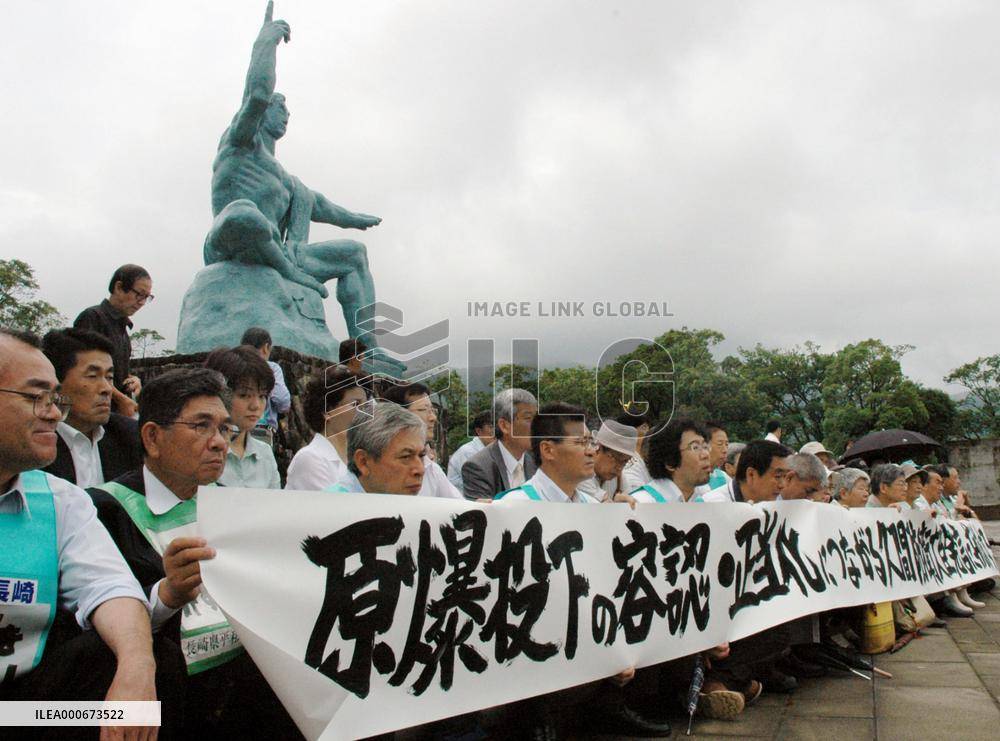 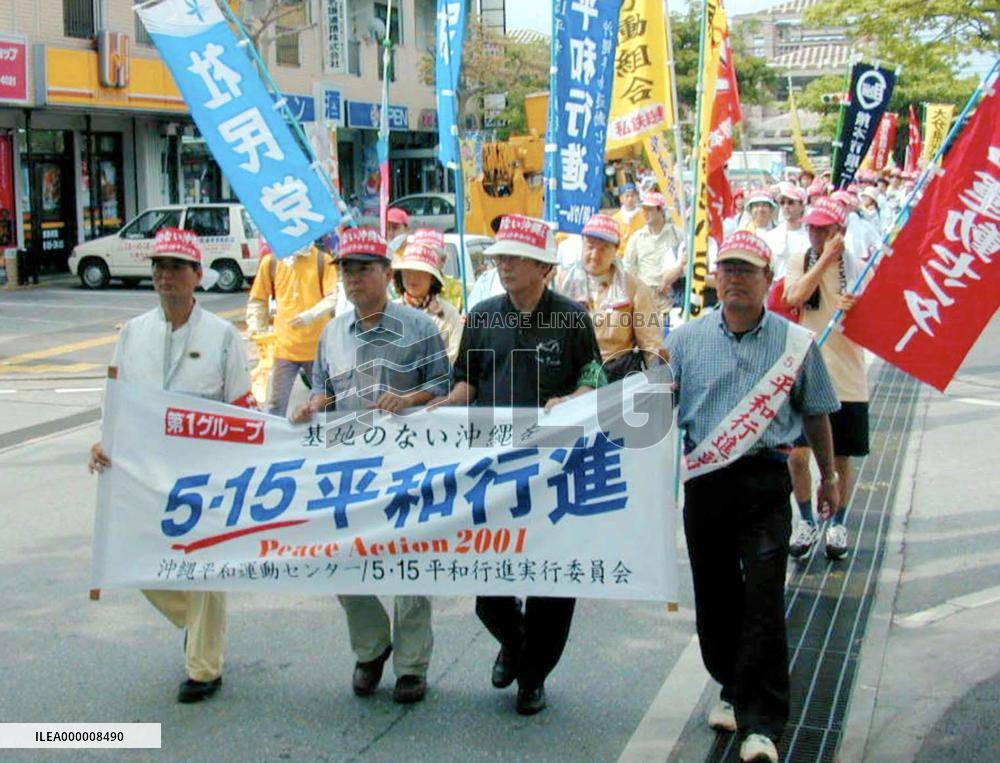 1,000 march against heliport relocation in Okinawa

NAGO, Japan - About 1,000 people begin a three-day march May 17 in Nago, in northern Okinawa Prefecture, to protest plans to relocate a U.S. military heliport in Okinawa rather than moving it out of the prefecture. The participants in the march, organized by the Okinawa Peace Action Center, left Nago for Naha, the prefectural capital in southern Okinawa.