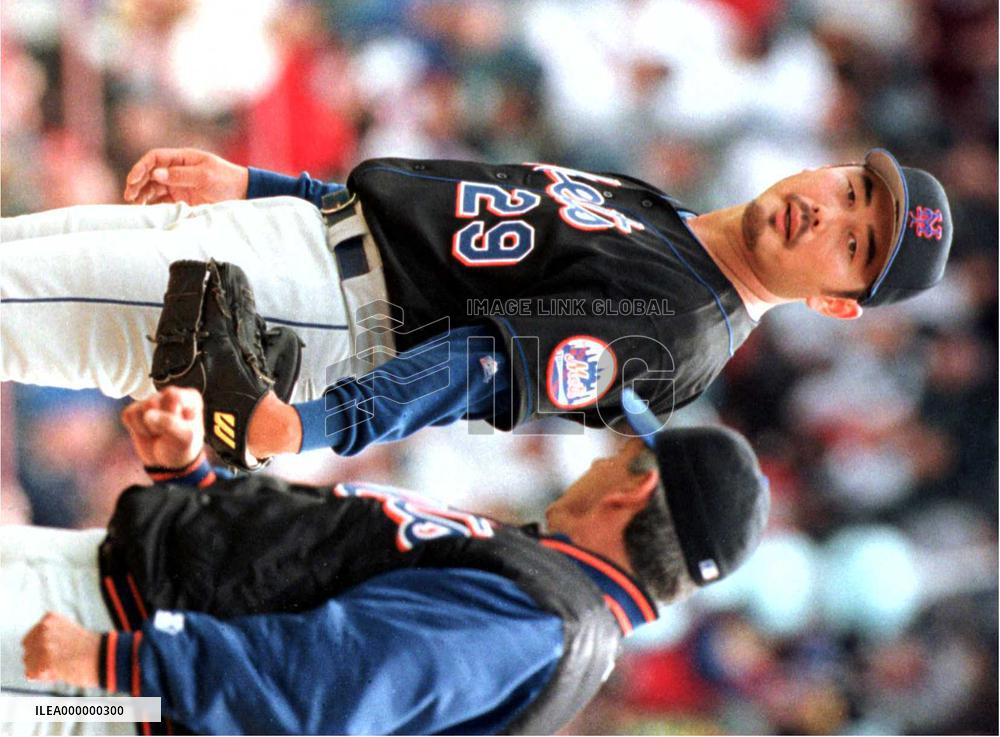 = Masato Yoshii gets clenched-fist advice from New York Mets manager Bobby Valentine as the Japanese starter worked himself into a two-on, two-out pinch in the sixth inning against the Milwaukee Brewers April 11 in a game the Mets eventually won 2-1. PHILADELPHIA, United States - New York Yankees pinch hitter Hideki Matsui high-fives teammates in the dugout after hitting a homer in the eighth inning of a World Series game against the Philadelphia Phillies at Citizens Bank Park in Philadelphia on Oct. 31, 2009. The Yankees won 8-5 and took a two to one advantage in the series. (Kyodo) PHILADELPHIA, United States - Los Angeles Dodgers starting pitcher Hiroki Kuroda (R) is taken out of the game by manager Joe Torre in the second inning in Game 3 of the National League Championship Series at Citizens Bank Park in Philadelphia on Oct. 18, 2009. Kuroda gave up six earned runs to the Phillies in only 1-1/3 innings as the Dodgers were defeated 11-0. (Kyodo) Red Sox fell 7-6 to the Angels

BOSTON, United States - Los Angeles Angels' Vladimir Guerrero rips a game-deciding, two-out two-run single in the ninth inning in the game against the Boston red Sox in the division series of the American League Championship Series on Oct. 11 at Fenway Park. The Angels won 7-6 in the come-from-behind victory, reaching its first ALCS since 2005. (Kyodo) TORONTO, Canada - Seattle Mariners designated hitter Ichiro Suzuki (C) protests to home-plate umpire Brian Runge after being called out on strikes in the fifth inning of a game against the Toronto Blue Jays at Rogers Centre in Toronto, Canada, on Sept. 26, 2009, while manager Don Wakamatsu tries to remonstrate with Suzuki. After the protest, Suzuki was ejected, for the first time in his professional career. (Kyodo) ANAHEIM, United States - New York Yankees' pinch hitter Hideki Matsui hits a homer to center in the eighth inning of a game against the Los Angeles Angels at Angel Stadium on Sept. 21, 2009. The Yankees lost the game 2-5. (Kyodo) BOSTON, United States - Boston Red Sox starter Daisuke Matsuzaka tips his cap to the fans as he is relieved in the seventh inning of a game against the Los Angeles Angels at Fenway Park in Boston on Sept. 15, 2009. Matsuzaka, who returned from a three-month stint on the disabled list, gave up three hits and three walks in 6-0/3 innings for his first win since June 2 as the Red Sox won 4-1. (Kyodo) Yankees' Matsui strikes out vs Rays