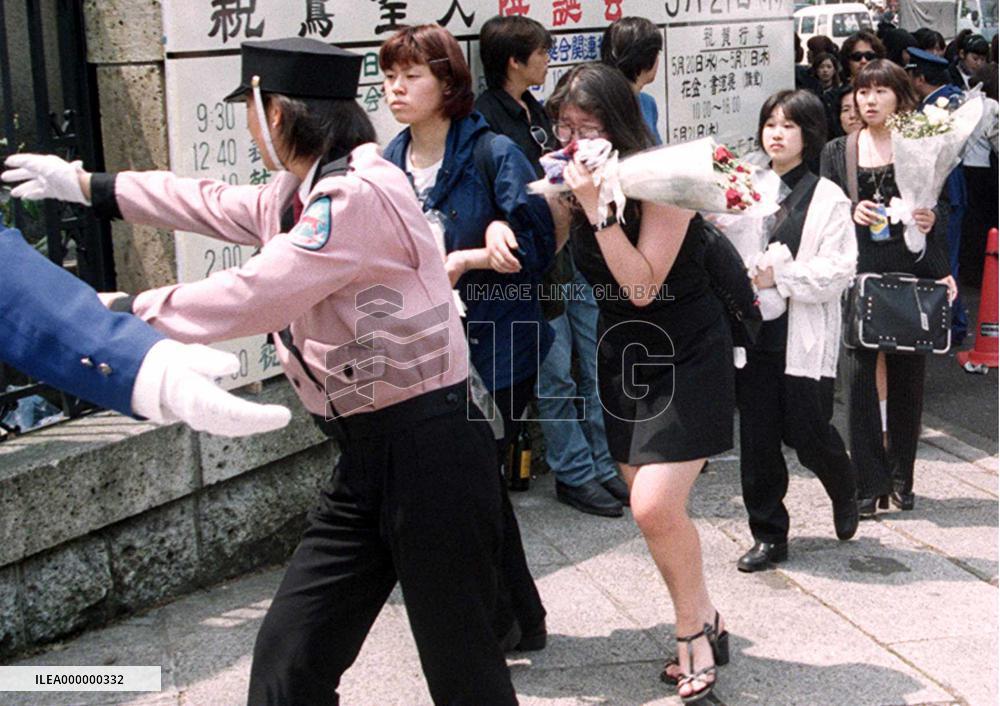 Fans of the disbanded rock group X Japan attend a funeral service at Tokyo's Tsukiji-Honganji Temple on May 7. Hideto Matsumoto, former lead guitarist in the X Japan group, hanged himself in his Tokyo condominium May 2. Apparently shocked by the death of the rock star whose stage name was Hide, several fans have attempted to commit suicide. TOKYO, Japan - An estimated 35,000 people form a long line that stretched over 2 kilometers outside a memorial hall in Tokyo, where a funeral service for Japanese rock singer Kiyoshiro Imawano, who died of a lymphatic disease a week ago at age 58, was held May 9. (Kyodo) TOKYO, Japan - U2 lead singer Bono speaks during an interview with a group of reporters in Tokyo on May 31. The Irish rock star said Japanese media should focus more on the positive aspects of Africa, and turn away from the ''tragic'' features that are often highlighted. (Kyodo) Some 30,000 people crowd the Seibu Dome in Tokorozawa, Saitama Prefecture, on May 2 to see an exhibition organized by fan clubs for Hideto Matsumoto, a member of the rock group ''X Japan'' known by his stage name Hide. Matsumoto, then 33, hanged himself in his Tokyo condominium exactly one year ago.