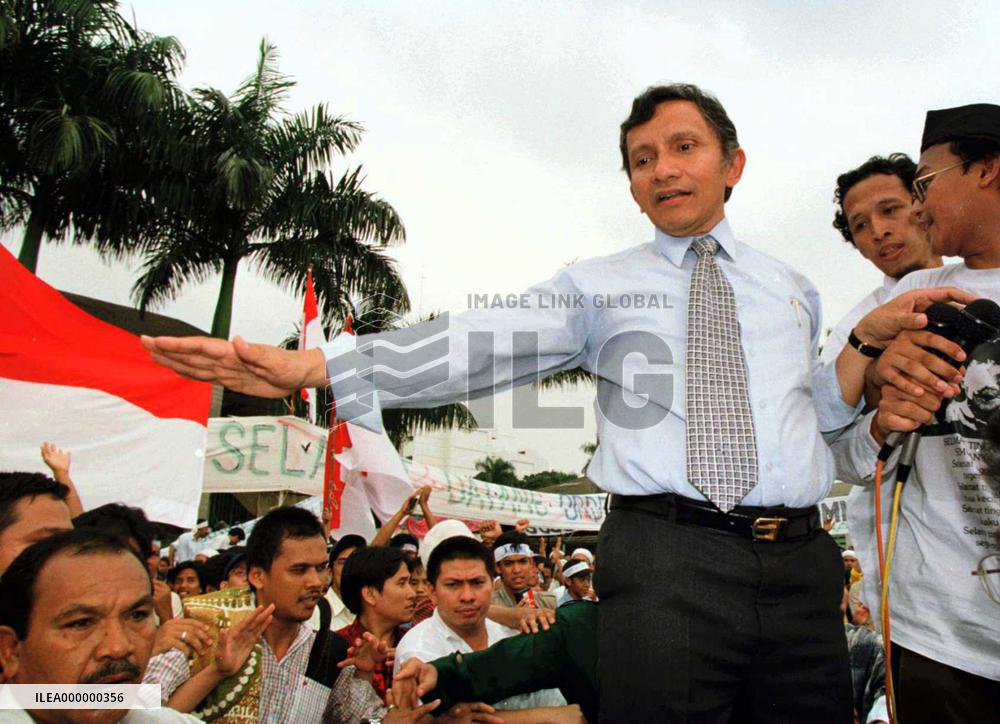 Amien Rais, Indonesia's leading opposition figure and chairman of the 28 million-strong Muhammadiyah Muslim organization, addresses a gathering of protesters in Jakarta soon after new President B.J. Habibie announced his cabinet lineup. Rais termed the cabinet neutral but said he neither endorsed nor opposed it. TOKYO, Japan - Leaders of four main opposition parties agree March 2 to submit a no-confidence motion against Prime Minister Yoshiro Mori's cabinet soon after the fiscal 2001 budget passes the House of Representatives later in the day. Attending the meeting are (from L to R) Takako Doi, chairman of the Social Democratic party, Ichiro Ozawa, leader of the Liberal Party, Yukio Hatoyama, leader of the Democratic Party of Japan, and Kazuo Shii, chairman of the Japanese Communist Party Presidium. Protesters urge Wahid to step down over scandals

JAKARTA, Indonesia - Students protest in front of the Indonesian parliament Jan. 17 calling on President Abdurrahman Wahid to step down over two financial scandals that allegedly involve him. One of the scandal, commonly called ''Bulogate,'' involves $4.1 million of government money channeled from the national food agency, or Bulog, allegedly for use by the president. JAKARTA, Indonesia - Indonesian President Abdurrahman Wahid (L) announces Oct. 26 a new ''National Unity'' cabinet that includes former military commander Gen. Wiranto as coordinating minister for politics and security affairs. The president, who is nearly blind, was accompanied by Vice President Megawati Sukarnoputri, who read the cabinet list for him at the presidential palace in Jakarta. JAKARTA, Indonesia - Several thousand students and supporters of opposition parties clash with security forces on Oct. 14 in Jakarta near the parliament building. The protesters demanded President B.J. Habibie step down and that the People's Consultative Assembly, the state's highest authority, reject a presidential accountability speech that Habibie was scheduled to deliver later in the day. Indonesian opposition leader Megawati Sukarnoputri makes a speech at a rally of some 3,000 supporters in East Timor's capital Dili on June 1. She appealed for peace and urged East Timorese to remain part of the Indonesian ''family'' despite their sufferings during former President Suharto's rule. Megawati made the half-day visit to East Timor four days before the close of campaigning in Indonesia's June 7 House of Representatives elections. ==Kyodo Indonesians of Chinese ancestry celebrate the Lunar New Year with traditional dancing in Jakarta on Thursday Feb, 18. For many of them, the New Year being celebrated this year is somewhat different from those in the past. They hope their culture and right to celebrate as they wish will be more respected after President B.J. Habibie revoked policies in force during three decades of rule by former President Suharto that had discriminated against them and other ethnic groups in Indonesia.