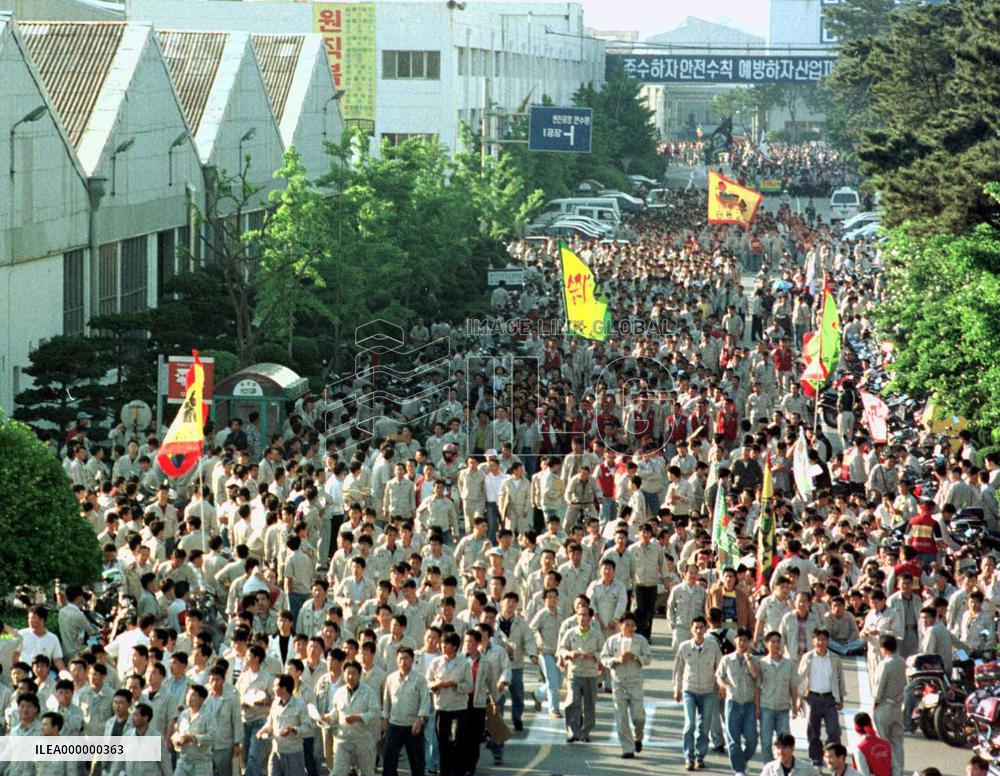 Workers at South Korea's leading automaker Hyundai Motors Co. march to a place of their gathering in the southern city of Ulsan on Tuesday afternoon prior to voting whether to walk out to protect layoffs. Later they decided to start a two-day strike beginning Wednesday afternoon.

STORY: Palestinian shot dead after lightly injures 8 Israelis DATELINE: Sept. 23, 2022 LENGTH: 00:01:46 LOCATION: Jerusalem CATEGORY: SOCIETY SHOTLIST: 1. various of police officers searching the site while ambulance and rescue workers evacuated the body of the attacker from the site STORYLINE: A Palestinian man was shot dead after slightly injuring eight Israelis by stabbing and spraying pepper gas in central Israel on Thursday night, Israeli police said. The police said in a statement that the incident -- which took place at a major crossroad outside the city of Modi'in, just next to the seam zone between Israel and the occupied West Bank -- was "a terror attack." Eyewitnesses told the state-owned Kan TV news that the suspect approached cars at the junction and attempted to open their doors and stab the people inside. Two people were stabbed and six were sprayed by the suspect, all in minor injuries, Israel's Magen David Adom rescue service said in a statement. An off-duty police officer who

STORY: Queen Elizabeth II's coffin arrives in Edinburgh DATELINE: Sept. 12, 2022 LENGTH: 00:01:22 LOCATION: EDINBURGH, UK CATEGORY: POLITICS SHOTLIST: 1. Queen's coffin arrives in Edinburgh 2. various of Royal Exchange 3. various of people paying tribute to Queen STORYLINE: Queen Elizabeth II's coffin left Balmoral Castle and arrived in Edinburgh, the capital city of Scotland on Sunday. Thousands of people gathered along the Royal Mile in Edinburgh to pay tribute to the Queen. Buckingham Palace released the arrangement for the funeral of the Elizabeth II on Saturday, saying the State Funeral of the Queen will take place at Westminster Abbey on Sept. 19. Prior to the State Funeral, the Queen will lie-in-state in Westminster Hall for four days, to allow the public to pay their respects. The Queen's coffin, resting at the Palace of Holyroodhouse until the afternoon of Monday, will be conveyed to St Giles' Cathedral, where the King and royal family members will receive the coffin. The Queen's coffin will t

STORY: Music festival concludes in West Bank city of Ramallah DATELINE: Aug. 29, 2022 LENGTH: 00:02:33 LOCATION: Ramallah CATEGORY: CULTURE SHOTLIST: 1. various of the festival in Ramallah 2. SOUNDBITE (Arabic): MOHAMMED SAWALHA, Local resident 3. various of music festival STORYLINE: The 13th version of "Wein a Ramallah" music festival concluded on Monday in the West Bank city of Ramallah. The event was organized by the Ramallah municipality to promote culture and encourage Palestinians to retain hope. Taking its name from a popular folklore song, the festival took place in public spaces throughout the city of Ramallah. Officially, the annual event started on Aug. 5, however, it was suspended during the 3-day military conflict between the Israeli army and the Palestinian Islamic Jihad (PIJ) in the Gaza Strip. On Aug. 21, the organizers of the festival resumed their activities in a bid to prove to the world that the Palestinian people aspire to live in peace and practice their rights. SOUNDBITE (Arabic

Gazans struggle to rebuild their places after military tension

13 killed, 5 injured as truck falls over bus in Pakistan

STORY: 13 killed, 5 injured as truck falls over bus in Pakistan DATELINE: Aug. 14, 2022 LENGTH: 00:01:07 LOCATION: Islamabad CATEGORY: OTHERS SHOTLIST: 1. various of the accident site STORYLINE: At least 13 people were killed and five others injured after a truck fell over a passenger bus in Rahim Yar Khan city of Pakistan's eastern Punjab province, rescue workers told local media on Saturday night. According to the reports, a passenger bus fell into a sinkhole at Feroza Central road and got stuck into it. The accident took place when a truck loaded with sugar bags fell over the bus. The rescue operation was started afterward with 10 emergency vehicles as well as cranes of the district administration, rescue officials said, adding that the rescue work was hampered due to heavy rains. The initial death toll of five increased to 13 as rescue teams started taking bodies out of the bus, the rescue officials said. The injured were shifted to a nearby hospital for medical treatment, they added. (220727) -- LONDON, July 27, 2022 (Xinhua) -- People stand next to ticket machines with notices of some routes unavailable due to a strike at King's Cross railway station in London, Britain, on July 27, 2022. More than 40,000 railway workers across Britain are taking a 24-hour strike on Wednesday, bringing another day of widespread delays and cancellations. (Xinhua/Li Ying)