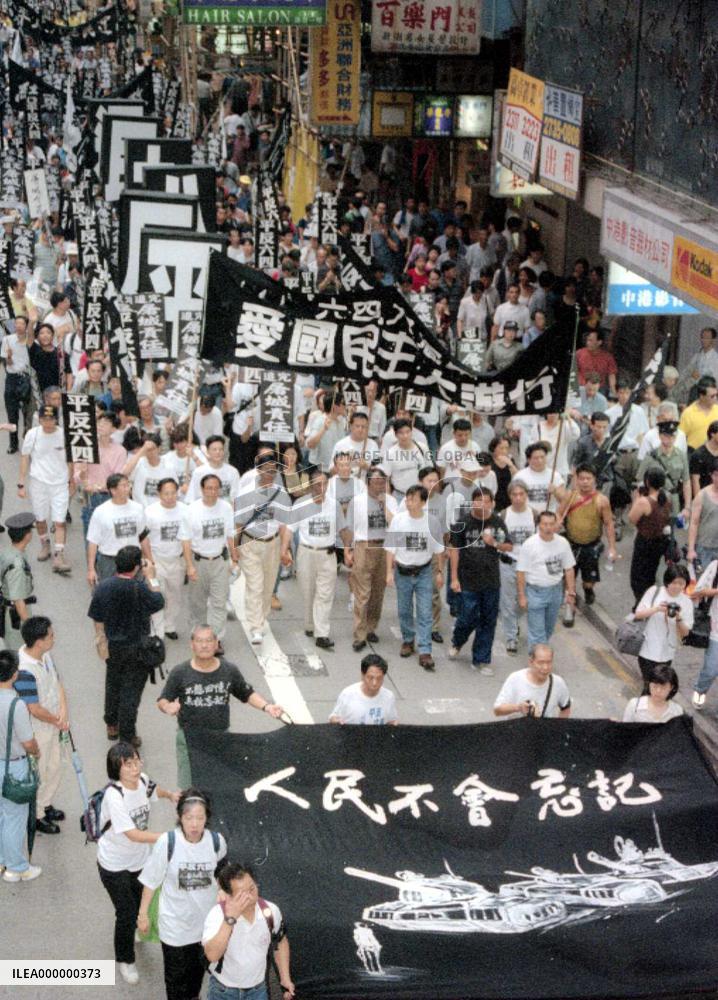 Thousands of people march in central Hong Kong on May 31 to mark the ninth anniversary of the 1989 military crackdown of pro-democracy demonstrators in Beijing's Tiananmen Square. ''The people shall not forget,'' reads the banner on front that is emblazoned with the memorable picture of a single man standing up to a column of tanks at the height of the June 4 crackdown. ==Kyodo

STORY: Major demonstrations held in Czech Republic DATELINE: Sept. 29, 2022 LENGTH: 00:00:59 LOCATION: Prague CATEGORY: POLITICS SHOTLIST: 1. various of the demonstration 2. SOUNDBITE 1 (Czech): Demonstrator 3. SOUNDBITE 2 (Czech): Demonstrator STORYLINE: A major demonstration took place in the Czech capital Prague on Wednesday. Police said tens of thousands of participants attended the rally. The demonstrators called for the country's direct contracts with gas suppliers at low prices, military neutrality, and political independence in decision-making with regard to the European Union (EU). SOUNDBITE 1 (Czech): Demonstrator "We have been usurped here for a long time. I am bothered by the government that fights against its own people. Our people are poor, single people are poor, and pensioners are poor. This bothers me and we have very expensive energy." SOUNDBITE 2 (Czech): Demonstrator "Politicians who are in the government today are not politicians. They are actors who play a role for Brussels." The STORY: Yemen's capital holds ceremony to mark 60th anniversary of revolution DATELINE: Sept. 27, 2022 LENGTH: 00:01:01 LOCATION: Sanna CATEGORY: POLITICS SHOTLIST: 1. various of Yemenis attending a torch lighting ceremony in Sanaa, Yemen's capital, to celebrate September Revolution Day STORYLINE: Hundreds of Yemenis gathered at a plaza in Sanaa, Yemen's capital, on Sunday night to celebrate the 60th anniversary of the Yemeni revolution. Yemen marks the September Revolution Day on Sept. 26 each year to commemorate the overthrow of the Imam Muhammad al-Badr on this day in 1962, which led to the establishment of the Yemen Arab Republic. Yemen has been mired in a civil war since late 2014 when the Iran-backed Houthi militia seized control of several northern provinces and forced the Saudi-backed Yemeni government out of the capital Sanaa. The war has killed tens of thousands of people, displaced 4 million, and pushed the country to the brink of starvation. Xinhua News Agency correspondents reporti

STORY: Israel hosts dragon boat race to mark 30th anniversary of diplomatic ties with China DATELINE: Sept. 17, 2022 LENGTH: 00:02:36 LOCATION: JERUSALEM CATEGORY: SOCIETY SHOTLIST: 1. various of the competition STORYLINE: A dragon boat race was held in northern Israel on Friday to mark the 30th anniversary of the establishment of diplomatic relations between Israel and China. More than 400 athletes from 10 Israeli teams competed in the event at Akko, a port city with thousands of years of history. The Akko Dolphin Dragon Boat Club won the race, which was jointly sponsored by the Chinese embassy to Israel and the municipal government of Akko. "The dragon boat race is more than a competition. It has turned into a cultural carnival that helps to forge closer bonds between the Chinese and Israelis," Chinese ambassador to Israel Cai Run said, adding he looked forward to more people-to-people exchanges and fruitful cooperation between the two countries. Yaniv Ashur, Akko municipality's CEO, hoped more simila (220917) -- CANBERRA, Sept. 17, 2022 (Xinhua) -- A visitor paints a picture at the festival event of Floriade in the Commonwealth Park in Canberra, Australia, Sept. 17, 2022. Floriade, one of the Australian Capital Territory's signature events, opened in the Commonwealth Park on Saturday for the first time in three years with the theme Sounds of Spring. Hundreds of thousands of people are expected to flood into the festival event. (Photo by Chu Chen/Xinhua) (220903) -- BEIJING, Sept. 3, 2022 (Xinhua) -- You Quan, a member of the Secretariat of the Communist Party of China (CPC) Central Committee and head of the United Front Work Department of the CPC Central Committee, attends a seminar to commemorate the 77th anniversary of victory in the Chinese People's War of Resistance against Japanese Aggression and the global war against fascism in Beijing, capital of China, Sept. 3, 2022. (Xinhua/Zhai Jianlan)