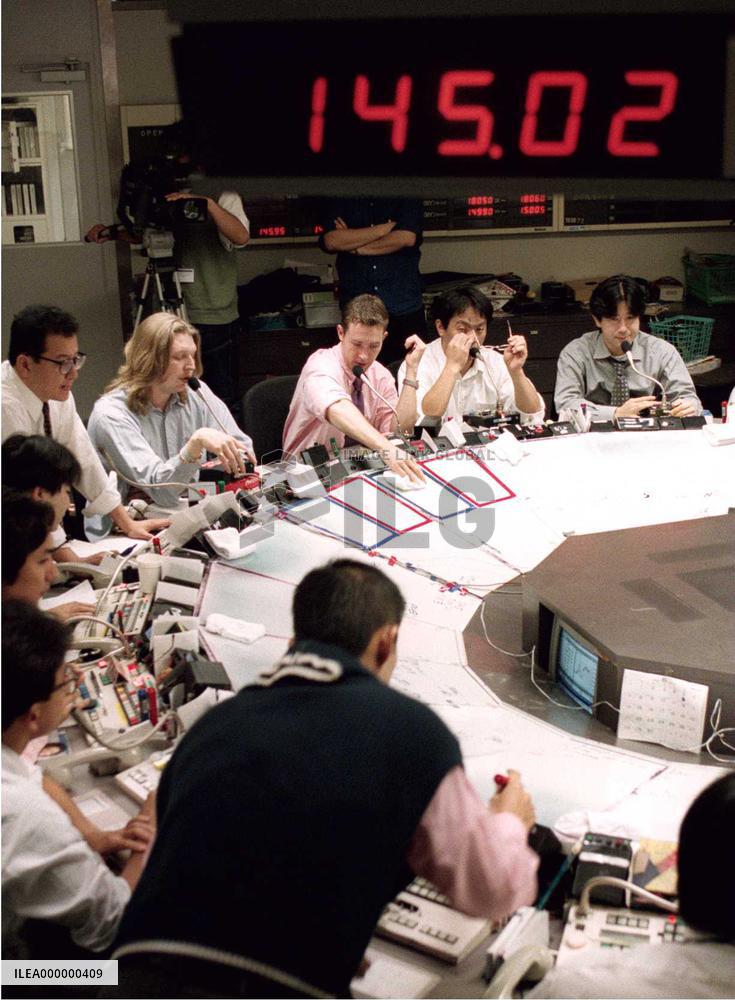 The Japanese yen slides and breaks through the 145 line to the dollar momentarily in morning trading in Tokyo on June 15. Japan's weak economy left market players with little reason to hold on to the Japanese currency, dealers say. The yen hit the 145 level for the first time since August 1990. The photo shows currency dealers receiving yen-selling orders at Ueda Harlow Ltd. in downtown Tokyo. TOKYO, Japan - Vice Economy, Trade and Industry Minister Hideji Sugiyama speaks at a press conference at his ministry in Tokyo on June 23 about a 24 million-yen misappropriation case involving a senior METI official. (Kyodo) TOKYO, Japan - The U.S. dollar shots up against the yen in Tokyo on Jan. 5 to break the 116 yen barrier for the first time since July 1999, extending its overnight rally in New York. The signboard at Tokyo Forex & Ueda Harlow shows the U.S. currency fetching 116.90 yen at 11:15 a.m. TOKYO, Japan - The U.S. dollar falls below 105 yen in early trading on the Tokyo currency market Sept. 16, prompting Prime Minister Keizo Obuchi to express strong concern over negative impact a stronger yen could have on Japan's economic recovery. The dollar briefly sank to 103.63 yen in New York on Sept. 15, touching the 103 yen level there for the first time since April 1996. The U.S. dollar lost ground in early Tokyo trading Wednesday Feb. 3, falling below the 112 yen mark at one point. The photo was taken at Ueda Harlow in Tokyo at 9:40 a.m. Wednesday. ==Kyodo An unidentified dealer at Tokyo Forex grabs a few moments break during frenetic dollar-yen trading on the morning of Tuesday August 4 in Tokyo. The dollar rose above 146 yen at one stage before easing to the 144 yen level The key Nikkei index of Tokyo stocks falls below 15,000 Friday June 12 for the first time in five months amid mounting concerns over the weak yen. The dollar zoomed to 144.75 yen at one point in early trading in Tokyo, a level last seen in August 1990. ==Kyodo The U.S. dollar climbs to 136.10 yen in Tokyo May 19 morning, the highest level since September 1991. Photo shows the exchange rate on the electronic board at an exchange trading center in Tokyo. ==Kyodo The dollar surges above the 135 yen line in Tokyo on April 3 to hit a six-and-a-half-year high, reflecting the gloomy outlook for the Japanese economy. Dealers were busily receiving orders for selling yen at Tokyo Forex's Nihombashi office. The yen hits this year's new low of 129.30 to the U.S. dollar in Tokyo morning trading Dec. 2 amid the ongoing Japanese financial crisis and the weakness of other Asian currencies. The photo shows the dealing room of a currency trader in Tokyo.