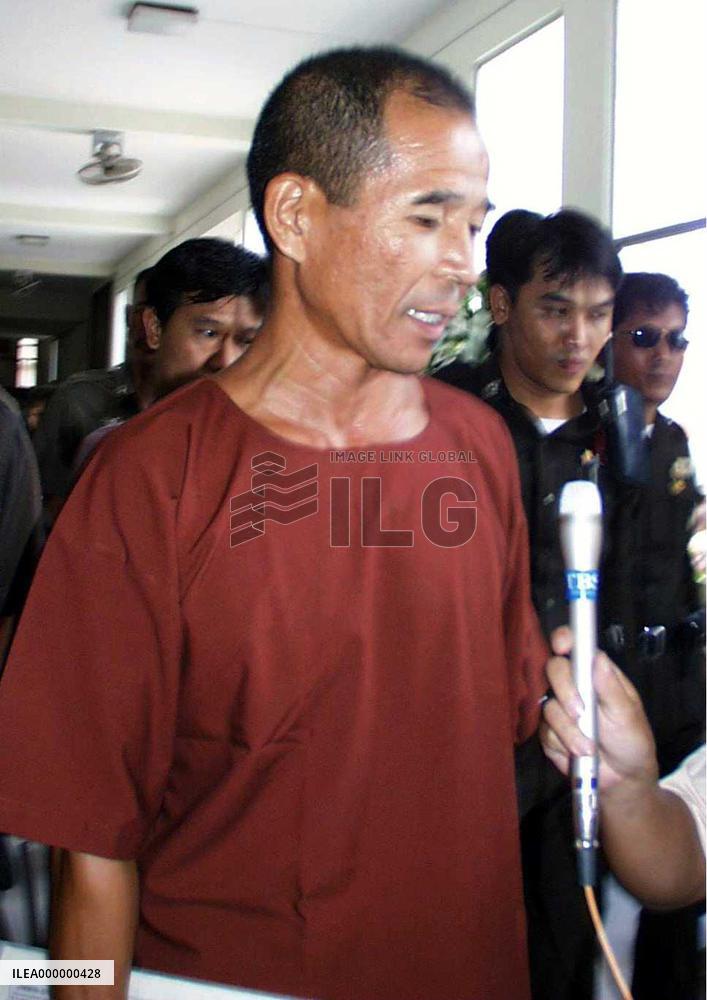 Yoshimi Tanaka, 49, a member of Japan's Red Army guerrilla faction, answers questions from reporters during a recess of a public hearing that began at a Thai court Thursday June 18. He admitted he and eight other members of the Red Army hijacked a Japan Airlines plane to North Korea in 1970 but pleaded not guilty to charges against him for passing counterfeit U.S. banknotes in the Thai resort city of Pattaya in 1996. NARITA, Japan - Three daughters of former Red Army Faction members, who hijacked a Japan Airlines (JAL) plane in 1970 and forced it to fly to North Korea, sit for a news conference after their arrival at Narita airport May 15. (From L to R) Azumi Tanaka, 22, Asaka Tamiya, 22, and Ritsuko Konishi, 23. On the flight to Narita, Tamiya, in an interview with Kyodo News, described the hijacking committed by her father and other members of the radical group as ''senseless'' and ''wrong.'' BEIJING, China - Yukio Yamanaka shows off in Beijing on April 30 travel documents issued by the Japanese Embassy in Beijing to three daughters of former Red Army Faction members for entry into Japan. The former terrorists were granted political asylum in North Korea after they hijacked a Japan Airlines plane in 1970. Yamanaka, leader of a support group for them, filed applications for the documents at the embassy in December. TOKYO, Japan - Photo shows the daughters of former Red Army Faction members who sought political asylum in North Korea after hijacking a Japan Airlines plane in 1970. Their support group, releasing the photo to the media April 25, declined to give their names. It said the Japanese Foreign Ministry will issue travel documents to the daughters to allow them to visit Japan. BEIJING, China - Yukio Yamanaka, a senior member of a Tokyo-based support group, Kyuen Renraku Center, for former Red Army Faction (Sekigun-Ha) members who hijacked a Japan Airlines (JAL) jet in 1970 applies at the Japanese Embassy in Beijing on Nov. 23 for visas for five of the hijackers' relatives living in North Korea. Tanaka extradited to Japan from Thailand

NARITA, Japan - Former Japanese Red Army member Yoshimi Tanaka is flanked by Japanese police officers at Narita airport, near Tokyo, on June 28. He was extradited from Thailand to stand trial for taking part in the 1970 hijacking of a Japan Airlines plane. Tanaka, who had been granted political asylum by North Korea after the hijacking, was arrested four years ago at the Vietnamese border on counterfeiting charges. BANGKOK, Thailand - Yoshimi Tanaka (in this file photo), a Japanese fugitive who was ordered by a Thai criminal court to be extradited to Japan on hijacking charges, will be handed over to Japanese authorities soon, possibly in a week or two, after his right to appeal expired June 9 without him exercising it. A Bangkok court ruled May 25 that Tanaka, 51, a former member of the ultra-leftist Red Army faction, be extradited to Japan to face hijacking and terrorism charges. BANGKOK, Thailand - Yoshimi Tanaka, 51, a one-time member of Japan's radical Red Army Faction, smiles as he walks into a Thai court in Bangkok on May 25. The court ruled that Thailand should extradite the fugitive wanted by Japan for the 1970 hijacking of a Japan Airlines (JAL) plane, putting an end to the man's nine-month fight against extradition. JAL hijacker ready to return to Tokyo possibly in June

BANGKOK, Thailand - Yoshimi Tanaka (C), 51, a fugitive wanted by Japan for the 1970 hijacking of a Japan Airlines plane, prepares to enter a Thai criminal court in Bangkok on May 16. He told the court he is ready to return to Japan to face terrorism charges, putting an end to a nine-month fight against extradition. Tanaka, a one-time member of the radical Red Army Faction, had been fighting extradition to Japan since August last year, saying the charges against him by the Japanese government are politically motivated.