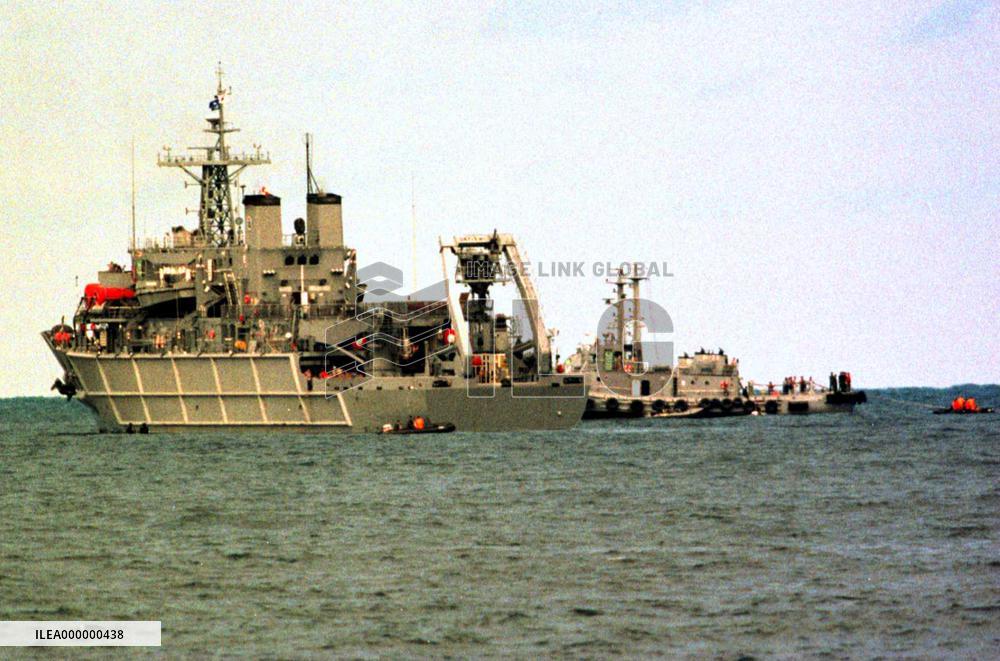 South Korean naval vessels patrol the waters off the country's east coast on June 23 after a captured North Korean submarine sank while being towed to Tonghae (5) port. The Seoul government said the submarine sank due to a loss of buoyancy at a point about 1.6 kilometers (1 miles) from shore. SHIMONOSEKI, Japan - Japanese whaling vessel Yushin Maru No. 3 anchored at Shimonoseki Port in Yamaguchi Prefecture on April 13 after it, along with two other whaling vessels, returned after completing their whale hunt for what the Japanese government calls scientific-research purposes. The vessel's stern was damaged in a collision with a Sea Shepherd Conservation Society vessel in the Antarctic Ocean. (Kyodo) NAHA, Japan - A Taiwanese boat (L in front), accompanied by two Taiwanese patrol vessels, head to the disputed Senkaku islets in the East china Sea in an apparent protest against Japan's handling of a ship collision involving a Taiwanese boat last week, the Japan Coast Guard said. A vessel (above) is a Japanese patrol boat. The Japanese-administered islets are claimed also by Taiwan and China. Photo was provided by the coast guard. (Kyodo) SYDNEY, Australia - Kazutomo Ban, 74, (3rd L) and other relatives of two Japanese sailors who died in a midget submarine during an attack on Sydney Harbour during World War II, pose with Neil Roberts (2nd L), the only Australian survivor in the Australian naval vessel Kuttabul which was torpedoed during the attack, during a memorial service in Sydney on Aug. 6. After remaining lost for almost 65 years, the M24 midget submarine of Sub-Lt. Katsuhisa Ban and Petty Officer Mamoru Ashibe was discovered late last year by a group of amateur divers about 5 kilometers off Sydney's coast. (Kyodo) 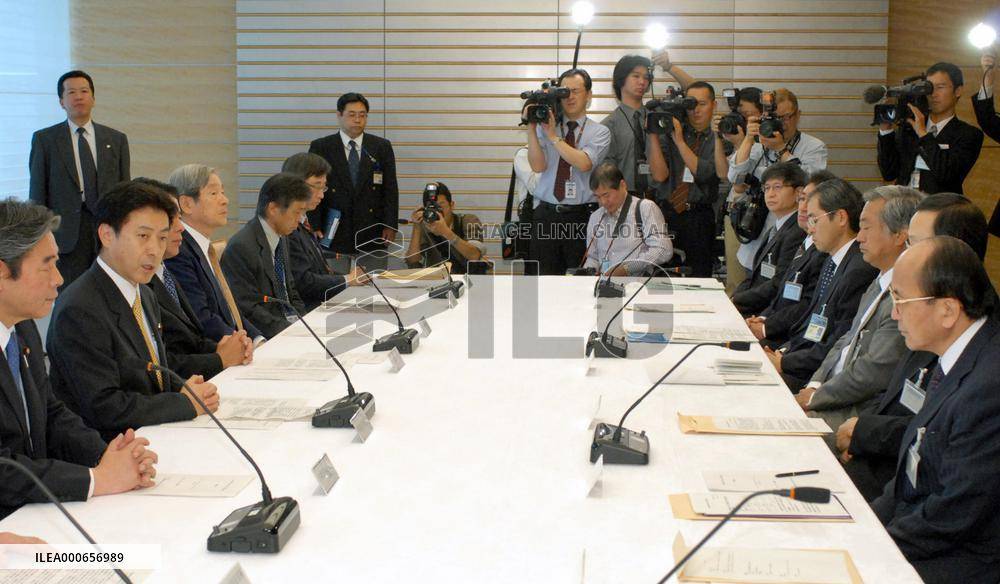 TOKYO, Japan - What is believed to a Taiwanese fishing boat (fore) carrying a citizens' group sails in the waters about 40 kilometers west-southwest of Senkaku Islands in a photo taken by the Japan Coast Guard at 6:30 a.m. on Aug. 17. A JCG patrol ship follows it in the back. JCG said the boat later reversed course after approaching the disputed islands, which are claimed by Japan, Taiwan and China. (Kyodo)

FUKUOAKA, Japan - The Dongfangfong No. 2, a 3,235-ton Chinese maritime survey ship, was spotted near the Senkakus, the Japan-controlled islets claimed also by China, on July 2, ignoring a warning by a Japanese patrol boat against conducting survey activities, the Japan Coast Guard said in releasing this photo. The coast guard said one of its patrol boats spotted the ship in Japan's exclusive economic waters, about 24 kilometers southwest of the Uotsuri, the main island of the Senkakus, known as Diaoyu in China. (Kyodo) KUSHIRO, Japan - A minke whale is landed at Kushiro port on Sept. 9 as a Japanese government-authorized research institute began its semiannual whaling campaign off the coast of Hokkaido. The Institute of Cetacean Research harpooned three minke whales off Kushiro on the first day of the fall whaling period that runs through Oct. 31. It aims to catch up to 60 minke whales during the period in order to investigate what impact whales have on the fisheries industry. (Kyodo) KUSHIRO, Japan - A minke whale is unloaded at Kushiro port as a Japanese government-authorized research institute began its semiannual whaling campaign off the coast of Hokkaido on Sept. 9. The Institute of Cetacean Research harpooned three minke whales off Kushiro on the first day of the fall whaling period that runs through Oct. 31. It aims to catch up to 60 minke whales during the period in order to investigate what impact whales have on the fisheries industry. (Kyodo) SHANGHAI, China - China held a maritime rescue drill in waters off Shanghai on July 7, part of which was joined by Japanese and South Korean vessels for the first time in a move aimed at bolstering cooperation among the coast guards of the three countries. (Pool photo) (Kyodo) TOKYO, Japan - The House of Councilors on Nov. 30 passes and enacts a bill allowing the Japanese authorities in an emergency to inspect foreign vessels inside and outside its territorial waters as part of international economic sanctions. The new law stipulates the Japanese authorities may inspect a nonmilitary foreign vessel in an emergency if mandated by a U.N. Security Council resolution or with the consent of the country where the vessel is registered.