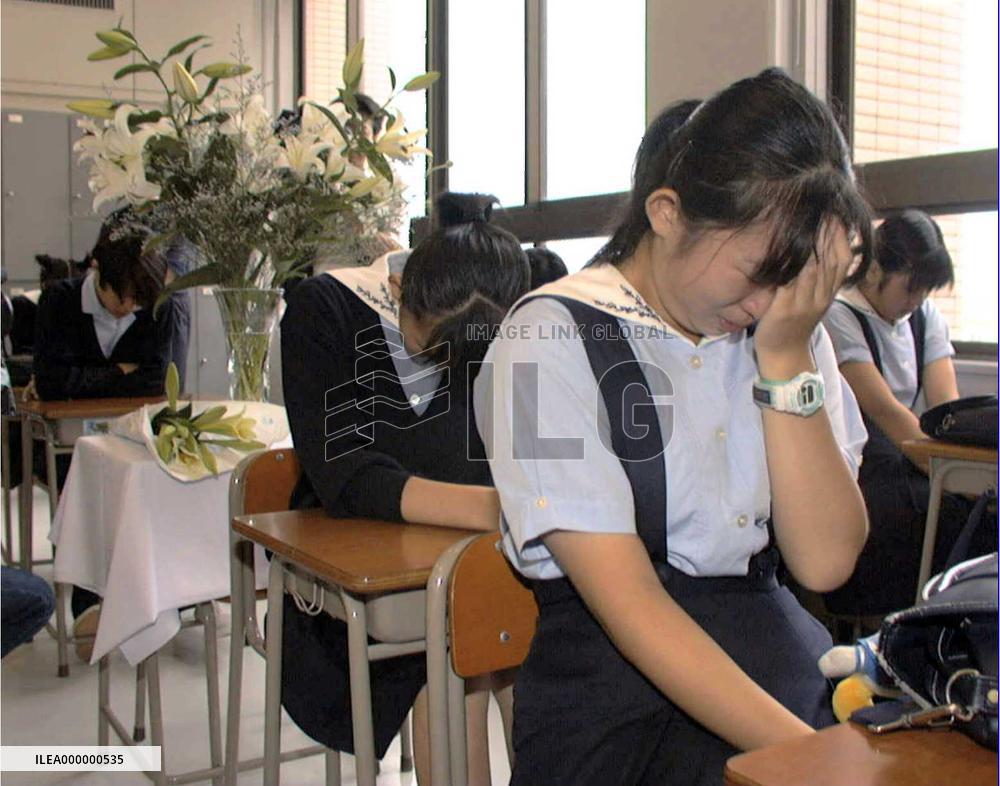 Schoolgirls weep over death of c

Japanese schoolgirls weep July 27 over the death of their classmate Miyuki Torii, 16, a first-grade student at Kaichi high school in Wakayama, western Japan. Torii was one of four people who died after eating curry and rice contaminated with cyanide at a summer festival in Wakayama.

STORY: Death toll from Russian school shooting climbs to 13 DATELINE: Sept. 26, 2022 LENGTH: 00:00:51 LOCATION: Moscow CATEGORY: OTHERS SHOTLIST: 1. various of rescuers saving the injured in the school STORYLINE: At least 13 people were killed, including seven children, in a shooting at a school in the Russian city of Izhevsk on Monday, TASS news agency reported, citing the Russian Investigative Committee. According to the committee, 14 children and seven adults were injured in the attack at the No. 88 school located near the city administration building of Izhevsk, the capital city of western Russia's Udmurt Republic. It was reported earlier that nine people were killed and about 20 others wounded in the shooting. The shooter has committed suicide and his body has been found, the committee said, adding that he was wearing a black T-shirt with Nazi symbols and a balaclava, and his identity remains unclear as he had no documents with him. The school has 982 students and 80 teachers, and they (220925) -- XI'AN, Sept. 25, 2022 (Xinhua) -- Chen Jiayue (C), a hearing-impaired barista, works at her own cafe in Xi'an, capital of northwest China's Shaanxi Province, Sept. 24, 2022. The International Day of the Deaf falls on the fourth Sunday each September. Since 2019, Shaanxi Urban Economy School has been providing free barista training for the hearing-impaired. Trainees can learn coffee-making skills as well as cafe operation knowledge during the training programme, which could help them in paving the way either to start their coffee business or get employed in this industry. So far, more than 20 people who have graduated from the training programme are working at cafes in various places across China. (Xinhua/Li Yibo) (220924) -- DJIBOUTI CITY, Sept. 24, 2022 (Xinhua) -- A student uses a touch screen at the Djibouti Luban Workshop at Djibouti Industrial and Commercial School in Djibouti City, capital of Djibouti, on Sept. 19, 2022. Africa's first Luban Workshop was launched in Djibouti in March 2019 with an aim to provide quality vocational training to local people, the country's youth in particular. In 2022, the first batch of 24 students will graduate from the Luban Workshop. (Xinhua/Dong Jianghui) (220924) -- DJIBOUTI CITY, Sept. 24, 2022 (Xinhua) -- A student shows a train driving simulator at the Djibouti Luban Workshop at Djibouti Industrial and Commercial School in Djibouti City, capital of Djibouti, on Sept. 19, 2022. Africa's first Luban Workshop was launched in Djibouti in March 2019 with an aim to provide quality vocational training to local people, the country's youth in particular. In 2022, the first batch of 24 students will graduate from the Luban Workshop. (Xinhua/Dong Jianghui) STORY: Chinese company donates supplies to flood-affected people in NW Pakistan DATELINE: Sept. 19, 2022 LENGTH: 00:00:49 LOCATION: Islamabad CATEGORY: SOCIETY SHOTLIST: 1. various of the relief materials 2. various of flood-hit areas in Pakistan STORYLINE: China Gezhouba Group Co., Ltd. (CGGC), the constructor of the Mohmand Dam Project in Pakistan's northwestern Khyber Pakhtunkhwa province, donated relief materials of over 700,000 Pakistani rupees (about 2,942 U.S. dollars) to local villagers affected by floods. The relief materials included rice, flour, cooking oil, and bottled water. The supplies were jointly donated by the Chinese and Pakistani employees of the company and handed over to local government and charity organizations. More than a dozen villages in the province were flooded by swollen rivers following heavy rainfalls. According to the National Disaster Management Authority (NDMA), the total death toll in Pakistan from this season's monsoon rains and floods since mid-June has risen to a

STORY: Classes resume in China's Luding after earthquake DATELINE: Sept. 15, 2022 LENGTH: 00:01:11 LOCATION: LUDING, China CATEGORY: SOCIETY SHOTLIST: various of Luding CountySOUNDBITE 1 (Chinese): ZHANG XUJUN, Principal of a boarding school in Luding CountySOUNDBITE 2(Chinese): NI SISI, Student in Luding CountySOUNDBITE 3(Chinese): WANG JUN, Principle of a local primary school STORYLINE: Classes have resumed in Luding County in China's Sichuan Province, which was the epicenter of a 6.8-magnitude earthquake earlier this month. 93 people died in the quake, which hit the region on Sept. 5. More than 17,000 students in Luding have returned to class, while some students from relocated families were arranged to study at nearby schools. SOUNDBITE 1 (Chinese): ZHANG XUJUN, Principal of a boarding school in Luding County "We provide psychological counseling to the children and help them in their daily life and studies, so that they can get over the pain of the disaster as soon as possible." SOUNDBITE 2(Chin

Death toll in residential building collapse in Jordan rises to 8

STORY: Death toll in residential building collapse in Jordan rises to 8 DATELINE: Sept. 15, 2022 LENGTH: 00:01:57 LOCATION: Amman CATEGORY: SOCIETY SHOTLIST: 1. various of rescuers searching for survivors after a residential building collapsed in Amman 2. SOUNDBITE (Arabic): HATEM JABER, Director of Civil Defense STORYLINE: The death toll in a residential building collapse in Jordan's capital Amman on Tuesday rose to eight, the Public Security Department (PSD) said in a statement Wednesday. Rescue work is still going on, the PSD added, noting that an infant and an injured person in his 50s were pulled out from the rubble of the collapsed building and transferred to the hospital. So far, 16 people have been injured due to the collapse, the state-run Petra news agency reported. The Director of Civil Defense Brigadier General Hatem Jaber told Xinhua Wednesday that rescue teams are still operating at full capacity to reach all people under the rubble. SOUNDBITE (Arabic): HATEM JABER, Director of C