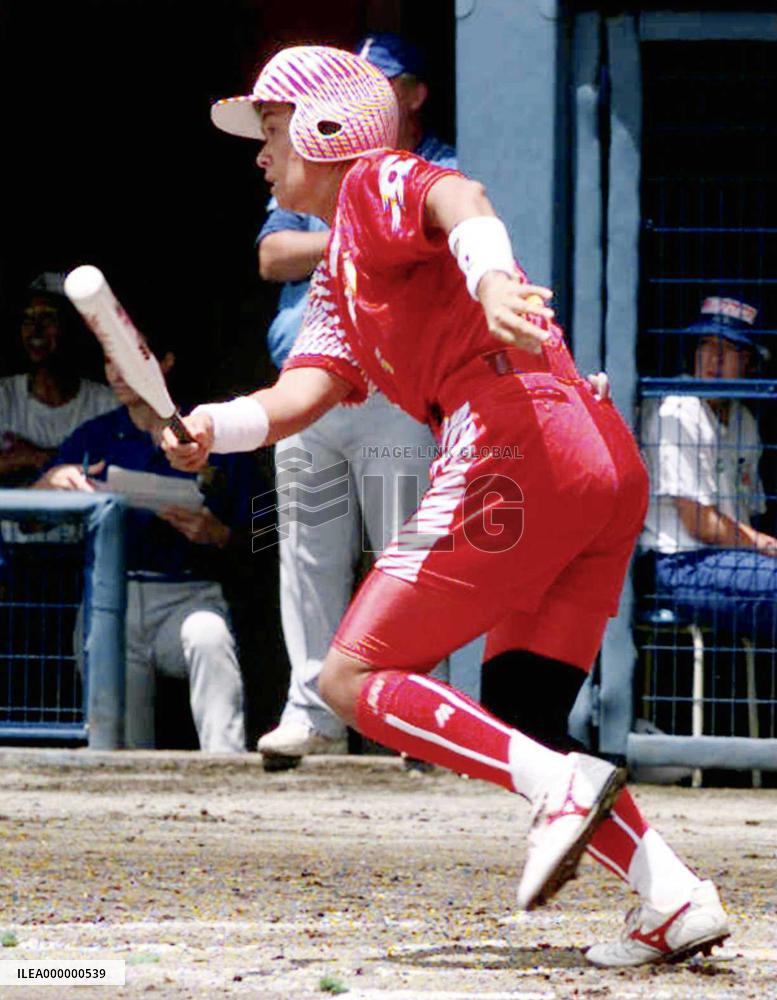 Japan earns a berth in the Sydney Olympics with a 2-0 victory over Italy at the women's world softball championship in Fujinomiya, Shizuoka Prefecture, central Japan, on July 29. The photo shows Noriko Yamaji hitting a clutch single up the middle with two out scoring Miyo Yamada from second. ==Kyodo TOKYO, Japan - This December 2009 file photo shows Jenny Wolf of Germany competing during a women's 500-meter race at a World Cup competition in Calgary, Canada. Wolf, who has won 28 World Cup competitions and come in second six times in the three seasons through this season, is aiming for gold at Vancouver in what will be her third Olympics competition. (Kyodo) HIROSHIMA, Japan - Women offer their prayers at a rally held at the Hiroshima Peace Memorial Park by members of seven atomic bomb survivors' groups in Hiroshima Prefecture to call for the realization of a nuclear-free world on July 31. TURIN, Italy - Japan's Yuka Kamino (back) loses her balance in the women's 500-meter short track event and failed to book a semifinal berth at the Palavela track at the Turin Olympics on Feb. 15. In front is South Korean Jin Sun Yu. (Kyodo) CHIBA, Japan - The Minami Police Station in Chiba Prefecture displays a small camera, shown at lower left front, that was used for secretly photographing women. The camera was hidden in the shoe. The photo was taken on July 20, 2005. (Kyodo) NAGAKUTE, Japan - Emperor Akihito and Empress MIchiko listen to a performance of traditional Chinese musical instruments during their visit to the country's pavilion at the 2005 World Exposition in Aichi Prefecture on July 13. (Pool photo) (Kyodo) NAGAKUTE, Japan - Emperor Akihito and Empress MIchiko look at exhibits at the pavilion of the International Federation of Red Cross & Red Crescent Societies at the 2005 World Exposition in Aichi Prefecture on July 13. (Pool photo) (Kyodo) SENDAI, Japan - Masumi Mishina (L) jumps in joy as she is greeted by teammates July 18 after connecting for a ''sayonara'' hit in the bottom of the ninth inning as Japan edged Italy 4-3 for its second straight victory in a softball warm-up series for the Athens Olympics. (Kyodo) NAGOYA, Japan - The photo, taken from a Kyodo News helicopter, shows Jennifer Murray, a 60-year-old British pilot, flying with two support helicopters to Ibaraki Prefecture on July 1 as part of her around-the-world solo helicopter trip. Earlier in the day, she left Nanki Shirahama airport in Wakayama Prefecture. She had refueling stops in the Middle East and Southeast Asia after leaving Britain in late May. MAEBASHI, Japan - Frederic Magne of France acknowledges the cheers of the fans at Green Dome Maebashi in Gunma Prefecture on April 17 after posting his first victory in the international keirin series being staged in Japan. The 1997 keirin world champion won by a half-length over Italy's Roberto Chiappa in the third event of the six-leg series. British pilots Andy Elson and Colin Prescot of a British hot-air balloon are rescued March 7 in the Pacific Ocean by a Japanese Air Self-Defense Force (ASDF) helicopter after abandoning their attempt to make the first nonstop circumnavigation of the world. The two were picked up unhurt shortly after the balloon landed some 80 kilometers south of Omaezaki, Shizuoka Prefecture in central Japan. The photo shows the balloon drifting at the mercy of the wind after landing in the sea in a bad weather.