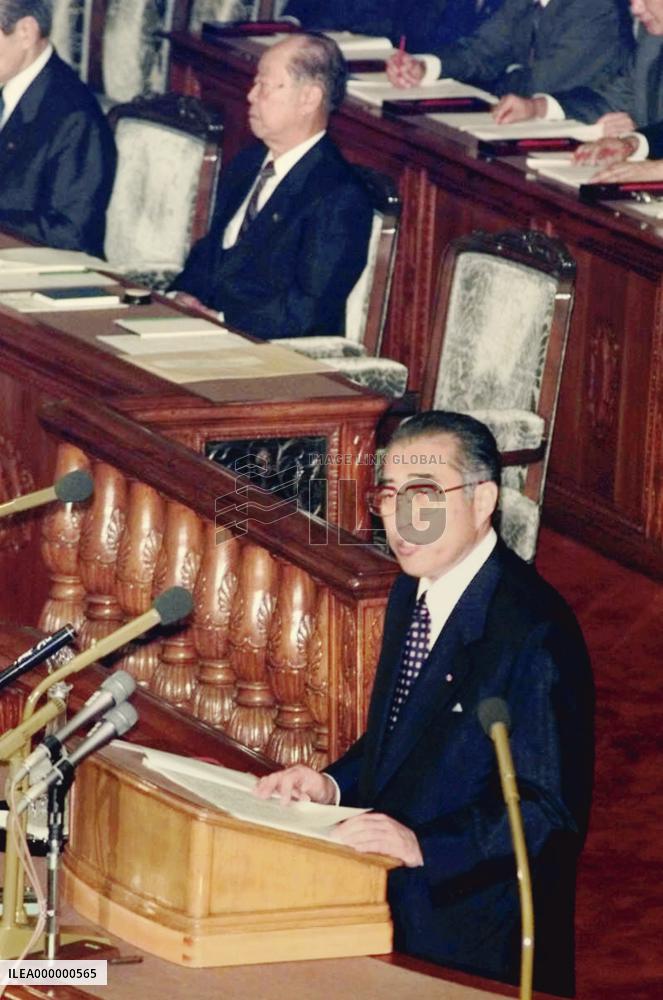 New Prime Minister Keizo Obuchi delivers his policy speech in an extraordinary session of the Diet (parliament) on Friday Aug. 7. Obuchi launched what he calls his ''economic reconstruction'' cabinet July 30, giving the Finance Ministry portfolio to former Prime Minister Kiichi Miyazawa (seated). During the 30-minute speech, however, the yen dropped against the U.S. dollar and stock prices fell as it contained no additional economic stimulus measures. ==Kyodo STORY: Egypt plans to raise prices of metro and train tickets: transport minister DATELINE: July 26, 2022 LENGTH: 00:01:03 LOCATION: Cairo CATEGORY: ECONOMY SHOTLIST: 1. various of metro stations in Egypt STORYLINE: Egyptian Transport Ministry plans to raise the prices of metro and train tickets, Kamel Al-Wazir, the minister of transport, announced on Sunday, following the increase in the fuel prices. The plan is scheduled to be presented to the cabinet and parliament for approval in the near future. Al-Wazir noted that there are no other option rather than to raise the prices after the increase of debts totaling 88 billion pounds to banks and 5 billion to the Ministry of Petroleum. The increase approved by the Ministry of Transport was the fourth of its kind during a six-year period, which began in 2017 when the ministry decided to raise the ticket from EGP 1 (about 0.05 U.S. dollars) to EGP 2 for all lines. Xinhua News Agency correspondents reporting from Cairo. (XHTV)

Czech EU Presidency to focus on consequences of Russia-Ukraine conflict

STORY: Czech EU Presidency to focus on consequences of Russia-Ukraine conflict DATELINE: July 7, 2022 LENGTH: 00:01:12 LOCATION: Brussels CATEGORY: POLITICS SHOTLIST: various of EU headquartersvarious of street view in Ukraine STORYLINE: Czech Prime Minister Petr Fiala told the European Parliament's plenary session on Wednesday that managing the consequences of the Russia-Ukraine conflict will top the list of priorities of the Czech Republic, which took over the rotating six-month Presidency of the Council of the European Union (EU) on July 1. Under the slogan "Europe as a task," the Czech Presidency's five priorities are managing the refugee crisis and Ukraine's post-war recovery; energy security; strengthening Europe's defense capabilities and cyberspace security; the strategic resilience of the European economy; and the resilience of democratic institutions. Meanwhile, Ukraine's Agrarian Policy and Food Ministry said in a statement on Wednesday that the country's grain harvest is projected to reach 6

STORY: New energy vehicles gaining popularity in China's Xinjiang DATELINE: July 1, 2022 LENGTH: 0:01:20 LOCATION: URUMQI, China CATEGORY: ECONOMY/SOCIETY SHOTLIST: STORYLINE: New energy vehicles (NEV) are gaining popularity in China's Xinjiang Uygur Autonomous Region. Official figures show that from January to May this year, nearly 1,800 NEVs were sold in Urumqi, the regional capital, an increase of over 380 percent year on year. In Ili Kazak Autonomous Prefecture, 2,200 NEVs were sold in the first half of this year, up 64 percent year on year. SOUNDBITE 1 (Chinese): GU MAOGUO, New energy vehicle owner in Xinjiang "We are answering the call of the country for peaking carbon dioxide emissions before 2030 and achieving carbon neutrality before 2060. In addition, global oil prices have kept rising, and we can easily find charging stations around here, so we have decided to buy a new energy vehicle. China has taken measures to bolster the NEV industry, including extending the preferential policy for NEV p

STORY: Malaysian PM unveils measures to ease rising food prices DATELINE: June 23, 2022 LENGTH: 00:01:56 LOCATION: Kuala Lumpur CATEGORY: ECONOMY SHOTLIST: various of a shopping mall in Malaysiavarious of street view in Malaysia STORYLINE: Malaysian Prime Minister Ismail Sabri Yaakob unveiled measures on Wednesday, aimed at easing the rising cost of living, as the country copes with increased food prices. Among these is an increase in cash aid for lower-income households, in view of the removal of certain subsidies and ceiling prices including for bottled cooking oil, he said in a televised speech. The prime minister said the government will continue to subsidize cooking oil sold in polymer bags, with 4 billion ringgit (0.9 billion U.S. dollars) set aside for the purpose this year, up from 500 million ringgit in 2020 and 2.2 billion ringgit in 2021. He also said 8.6 million people will be targeted for cash aid to cope with the rising cost of living, amounting to 1.74 billion ringgit which will

STORY: MEPs reject crucial "Fit For 55" draft climate laws DATELINE: June 9, 2022 LENGTH: 00:02:13 LOCATION: Brussels CATEGORY: POLITICS SHOTLIST: 1. Outside views of the EU Parliament in Strasbourg, France 2. Shots of the vote session in the Parliament 3. shots of gas emission 4. shots of green energy 5. shots of the EU flag STORYLINE: Members of the European Parliament on Wednesday sent back to the drawing board three draft laws forming part of the European Commission's "Fit For 55" climate legislation package, referring them back to Parliament's committee on environment (ENVI) for further consideration. The draft legislations were on the reform of the Emissions Trading System (ETS), the European Union's (EU) Carbon Border Adjustment Mechanism (CBAM) and the Social Climate Fund. Parliament was meant to adopt its position on legislative proposals that aim to deliver on the EU's climate action ambitions. The measures are part of the "Fit for 55" package and seek to reduce the EU's greenhouse gas emis

STORY: Malaysia's ban on chicken exports takes effect DATELINE: June 1, 2022 LENGTH: 00:05:00 LOCATION: Kuala Lumpur CATEGORY: ECONOMY SHOTLIST: 1. various of morning market 2. various of chickens in cage and poultry suppliers STORYLINE: Malaysia's ban on chicken exports has taken effect as of Wednesday, aimed at stabilizing domestic supplies and alleviating shortages. Prime Minister Ismail Sabri Yaakob announced the ban on May 23 over ballooning prices of chicken and chicken products in the market and a supply shortage to local consumers. The export ban will remain in place until the situation stabilizes, allowing the Southeast Asian country to create a stock buffer. The measures, along with abolishing approved permits for imports as well as facilitating the claim process for subsidies to farmers, are aimed at shoring up the country's food security. Transactions in markets around the capital Kuala Lumpur showed sufficient chicken stocks available for sale at the set prices, which have been