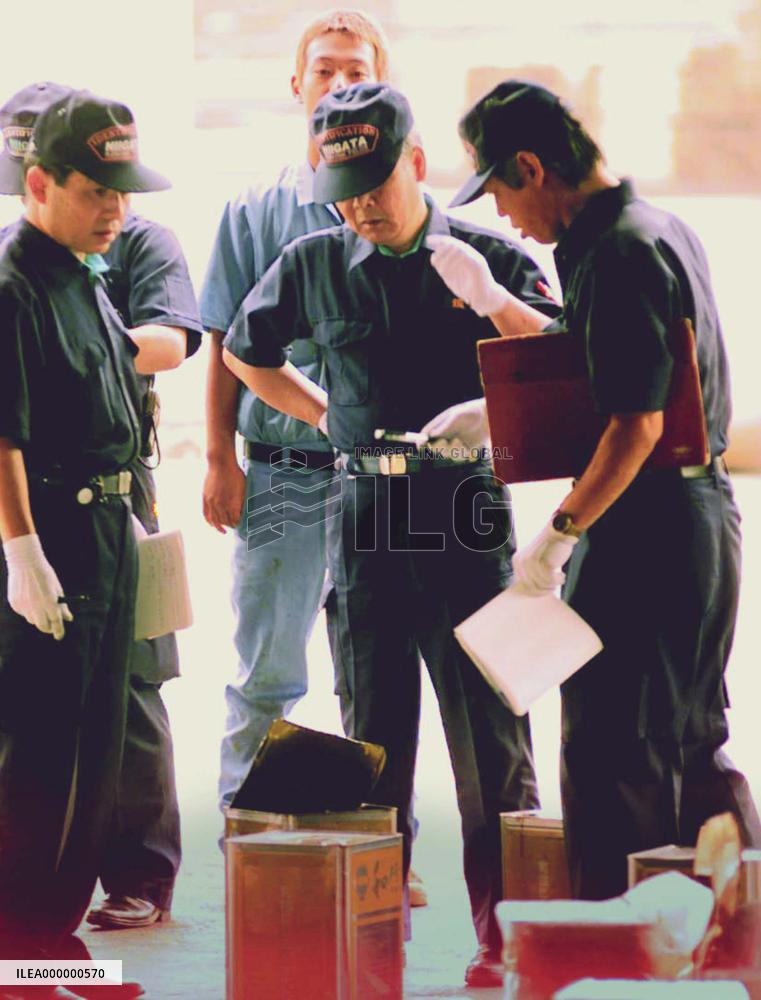 Police investigators conduct their probe at a wood preservatives maker in Niigata on the Sea of Japan coast Aug. 11, one day after 10 of the firm's employees were hospitalized after drinking tea and coffee made with hot water believed poisoned. Twelve workers of the Niigata branch of Xyence Co. complained of dizziness and nausea after taking the hot drinks. Ten of them were taken to hospital in the city. ==Kyodo

STORY: Immigrant boat sinks off Syria, death toll climbs to 77 DATELINE: Sept. 24, 2022 LENGTH: 00:01:11 LOCATION: Damascus CATEGORY: SOCIETY SHOTLIST: 1. various of ambulances carrying victim bodies leaving al-Basel hospital in Tartous to the Lebanese border STORYLINE: Syria's health minister Hassan al-Ghabbash said Friday that the casualty toll of the immigrant boat that sank in the Syrian territorial water a day before rose to 77, noting that the number is not final, amid an ongoing search mission. In a statement, al-Ghabbash said 20 others people have been saved and currently receiving medical treatment at the al-Basel hospital in the Syrian coastal city of Tartous, as the immigrant boat sank off of its shore. The victims' bodies were found in different areas on the coast of Tartous, said General Director of Sea Ports, Brigadier General Samer Kobrosly, who added that 31 bodies were found on Friday alone. This is the first time during Syria's 11-year war that an immigrant ship sinks in the Syrian wat 2 dead, about 20 injured as gangway collapses at shipyard

OITA, Japan - Firefighters and police officers take care of victims of a gangway-collapse accident at the Ozai shipyard of Minaminippon Shipbuilding Co. in the city of Oita, Oita Prefecture. A 27-meter-long gangway collapsed shortly after being installed, sending workers falling to the ground or into the sea. (Kyodo) KASHIWAZAKI, Japan - Police search a two-story house in the central Niigata prefecture city of Kashiwazaki on the Sea of Japan coast on Jan. 29, where a 37-year-old jobless man allegedly confined for more than nine years a then 9-year-old elementary school girl he had abducted on Nov. 13, 1990. The house is about 47 kilometers southwest of her home in the city of Sanjo. ''For nine years, I did not take a step out of the second floor of the house,'' she, now 19, told police. Police arrest Akihiko Osanai (C), a former employee of a wood processing company Feb. 11 for allegedly poisoning the drinks of nine colleagues last August. Osanai was arrested at his home in Muroran, Hokkaido, and was flown to Niigata later in the day. This photo was taken in a police station in the city of Niigata.