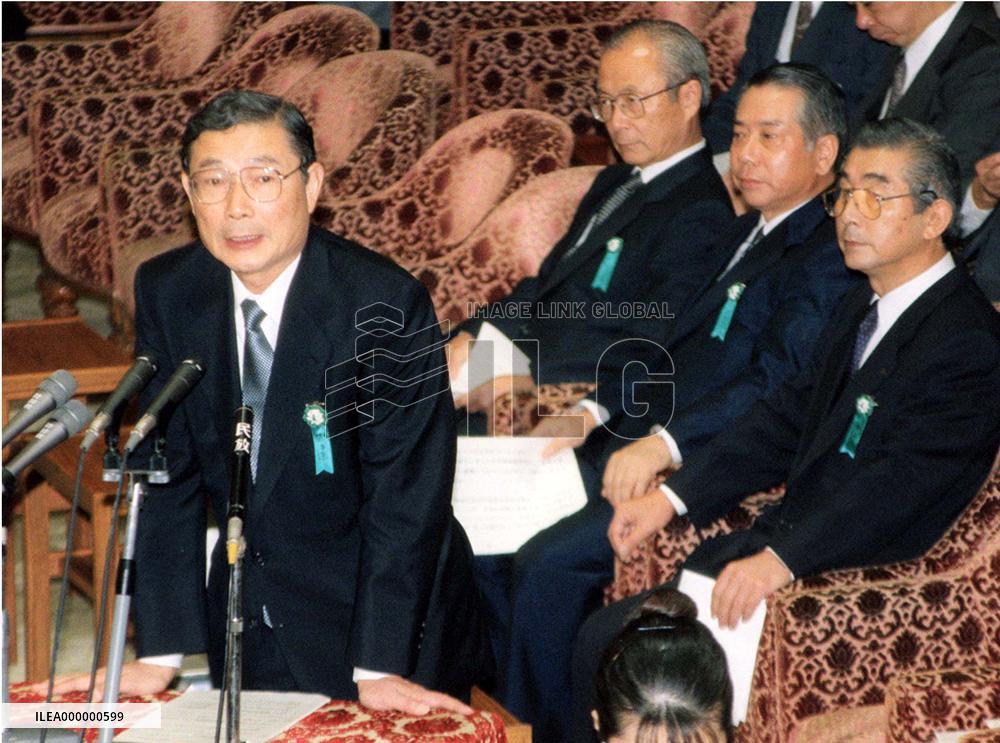 Katsunobu Ohnogi (L), president of troubled Long-Term Credit Bank of Japan (LTCB), gives unsworn testimony at a committee meeting on financial stabilization in the House of Representatives on Aug. 31. The panel discussed a government plan to inject public funds into LTCB to strengthen its capital base and facilitate its merger talks with Sumitomo Trust and Banking Co. Three other unsworn witnesses from other companies at the back of Ohnogi were also questioned.

STORY: U.S. House panel investigating Capitol riot makes criminal referrals DATELINE: Dec. 20, 2022 LENGTH: 0:01:42 LOCATION: Washington D.C. CATEGORY: POLITICS SHOTLIST: 1. various of the U.S. House Select Committee holding final meeting 2. various of the Capitol riots on January 6, 2021 (file) STORYLINE: The U.S. House select committee investigating the Capitol riot of Jan. 6, 2021, made criminal referrals to the Department of Justice (DOJ) on Monday afternoon. The committee accused former U.S. President Donald Trump of inciting an insurrection, conspiracy to defraud the United States, conspiracy to make a false statement, and obstruction of an official proceeding. The criminal referrals are not legally binding, and it is up to the DOJ to decide whether to pursue charges, according to U.S. legal analysts. The DOJ is running its own probe into the Capitol riot, in which Trump supporters disrupted a joint session of Congress on Jan. 6, 2021, to certify the 2020 presidential election results. A Republic

STORY: DRC, rebel groups agree to release prisoners after peace talks in Kenya DATELINE: Dec. 8, 2022 LENGTH: 00:01:11 LOCATION: Nairobi CATEGORY: POLITICS SHOTLIST: 1. various of representatives arriving for the meeting 2. various of the meeting 3. SOUNDBITE (Swahili): UHURU KENYATTA, Former Kenyan President STORYLINE: The Democratic Republic of the Congo (DRC) government and representatives of major rebel groups wrapped up a new round of peace talks on Tuesday in the Kenyan capital city of Nairobi, with participants agreeing on a raft of issues including the unconditional release of prisoners. The third inter-Congolese consultations resolved that prisoners without criminal records of atrocities or criminal convictions would be freed. Those who participated in the talks are committed to the cessation of hostilities, the release of child soldiers, as well as access to humanitarian aid. After the rebel groups accepted a ceasefire, former Kenyan President Uhuru Kenyatta who facilitated the talks said that

STORY: Pakistani PM hails China for timely flood relief aid DATELINE: Sept. 30, 2022 LENGTH: 0:00:42 LOCATION: Islamabad CATEGORY: POLITICS SHOTLIST: 1 various of the flooded area 2 various of Pakistani Prime Minister Shahbaz Sharif speaking 3 various of Chinese Ambassador to Pakistan Nong Rong 4 various of the arrival of Chinese-donated relief goods for Pakistan 5 various of the flooded area STORYLINE: Pakistani Prime Minister Shahbaz Sharif has appreciated China and its leadership for providing timely aid and relief goods for the flood-affected people of the country. Speaking at a meeting to donate funds for the flood-affected people by the China Three Gorges Corporation (CTG) at the Prime Minister's House in the capital Islamabad on Thursday, Shahbaz expressed his gratitude to the Chinese government, leadership and people who stood by Pakistan during the difficult time. Chinese Ambassador to Pakistan Nong Rong and a delegation of the CTG led by the deputy head of the China Three Gorges South Asia Inve

STORY: Argentina's new minister of economy takes office DATELINE: Aug. 4, 2022 LENGTH: 0:01:56 LOCATION: Buenos Aires CATEGORY: POLITICS SHOTLIST: 1. various of the meeting 2. SOUNDBITE (Spanish): ALBERTO FERNANDEZ, Argentine President STORYLINE: Argentina's new Minister of Economy, Productive Development, Agriculture, Livestock and Fisheries Sergio Massa swore in on Wednesday. Massa's inauguration ceremony took place at the Bicentennial Museum of the Government House in downtown Buenos Aires, the capital of Argentina. SOUNDBITE (Spanish): ALBERTO FERNANDEZ, Argentine President "It is a time for all of us, with a lot of hope, to join efforts to move forward. When I say everyone, I am not only talking about my colleagues of the Frente de Todos, whose unity for me is paramount, but also about all Argentines. We have a great opportunity as a country. Let us not overlook it." Members of the Cabinet of Ministers, national deputies and senators, and provincial governors were present at the event. Xinhua News

STORY: Lao PM vows to stabilize economy, finance, currency to avert crisis DATELINE: June 15, 2022 LENGTH: 00:01:55 LOCATION: Vientiane CATEGORY: POLITICS/ECONOMY SHOTLIST: 1. various of the meeting STORYLINE: The Lao government will strive to stabilize the economy, financial situation and currency in order to prevent a crisis, Lao Prime Minister Phankham Viphavanh told the National Assembly (NA) at the start of its 3rd ordinary session which kicked off in the capital Vientiane on Monday. At the session, the NA President Xaysomphone Phomvihane delivered the opening remarks, giving the floor to the government to present a report on the progress made in implementing the socio-economic development, budget and currency plans over the first half of this year. Prime Minister Phankham said an 11-point work plan has been devised to support the achievement of the development targets set for 2022. "The government will speed up efforts to resolve the fragility of the macro-economy and normalize the situation," loc

STORY: U.S. House select committee investigating Capitol riot holds first public hearing DATELINE: June 10, 2022 LENGTH: 00:03:12 LOCATION: Washington CATEGORY: POLITICS SHOTLIST: 1. various of the hearing 2. various of the capitol riot on January 6, 2021 STORYLINE: The U.S. House select committee investigating the Capital Hill insurrection on Jan. 6 of 2021 held its first public hearing on Thursday night. Two panel members delivered opening remarks while presenting the findings of its year-long investigation, including previously unseen material documenting the event. The panel, which includes seven House Democrats and two Republicans, also called two witnesses, including a Capitol police officer who was injured that day. It was one of a series of hearings set to be televised throughout the month to show the public what investigators have uncovered about the Capitol riot. Former U.S. President Donald Trump's allies and supporters have charged the inquiry as a political "witch hunt" designed to tar Tru

Polish not to get EU funds soon despite EC's approval

STORY: Polish not to get EU funds soon despite EC's approval DATELINE: June 4, 2022 LENGTH: 00:02:32 LOCATION: Warsaw CATEGORY: POLITICS SHOTLIST: 1. various of the meeting and the press conference 2. SOUNDBITE (English): URSULA VON DER LEYEN, President of the European Commission STORYLINE: Polish President Andrzej Duda on Thursday welcomed the European Commission's (EC) approval of Poland's National Recovery Plan (KPO), but his country still has to wait for the fund. Speaking at a press conference with visiting EC President Ursula von der Leyen and Polish Prime Minister Mateusz Morawiecki near Warsaw, Duda said the approvement "has a breakthrough significance for Poland to be able to obtain EU funds in the future," according to Polish Press Agency. A dispute over the rule of law had led to the EC delaying its approval of the KPO, prompting the Polish government to adhere to a European Court demand that it liquidate a judicial disciplinary body. Duda expressed satisfaction that his amendments to the S