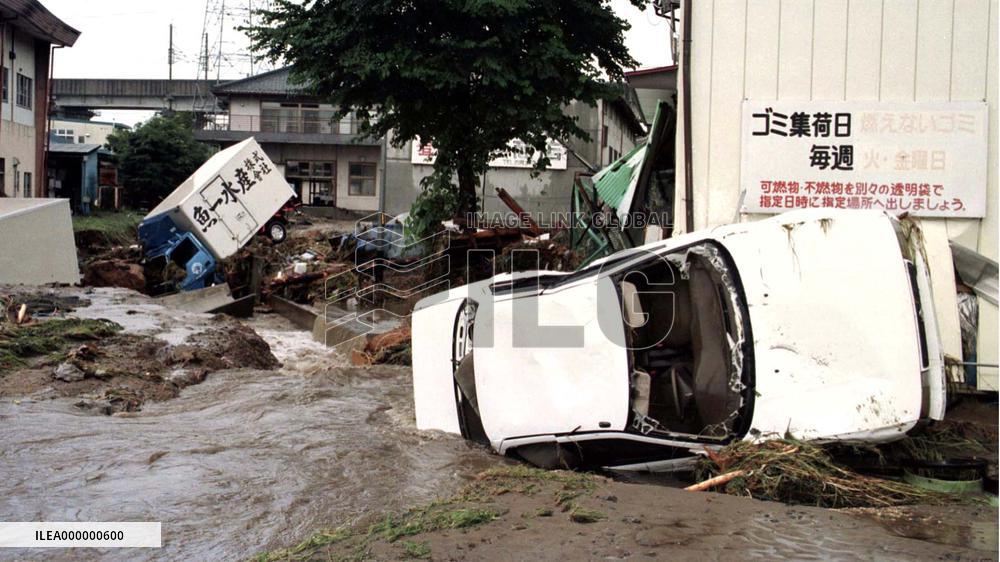 A passenger car (R) and a truck are being washed away by a flooding river in the town of Gobanchogawara, Fukushima Prefecture, northeast of Tokyo on Aug. 30. Many houses and facilities were destroyed by landslides and floods triggered by heavy rains that hit Fukushima.

STORY: Flash floods kill 8, injure 6 in eastern Afghanistan DATELINE: Aug. 16, 2022 LENGTH: 00:02:14 LOCATION: JALALABAD, Afghanistan CATEGORY: SOCIETY SHOTLIST: 1. various of the flood-hit area and local residents in Nangarhar province STORYLINE: At least eight people were killed and six others injured on Monday as a result of heavy rains and flash floods in Afghanistan's eastern province of Nangarhar, said a local official. Floods swept through Sheikh Musri locality and its vicinity outside the provincial capital Jalalabad. Four of the victims are children who lost their lives after the roof of their house caved in due to heavy rains, said Qari Saifullah, provincial director of natural disaster and humanitarian affairs. Dozens of residential houses have either been washed away or badly damaged due to the flooding, which also left six people injured, the official added. Torrential rains and flash floods, according to officials, claimed 17 lives in eastern province of Parwan on Sunday. Xinhua News Age OKAYA, Japan - Houses are washed away by rain-triggered mudslides in the city of Okaya, Nagano Prefecture, on July 19. (Kyodo) NARAHA, Japan - Funs shout their cheers as Japan striker Seiichiro Maki (R) and goal keeper Yoichi Doi arrive at the J-Village on May 17 for their final training camp before departing for the World Cup finals in Germany. Many fans wearing national team colors screamed Maki's name as a crowd of around 500 greeted the national team at the training facilities in Fukushima Prefecture. (Kyodo)