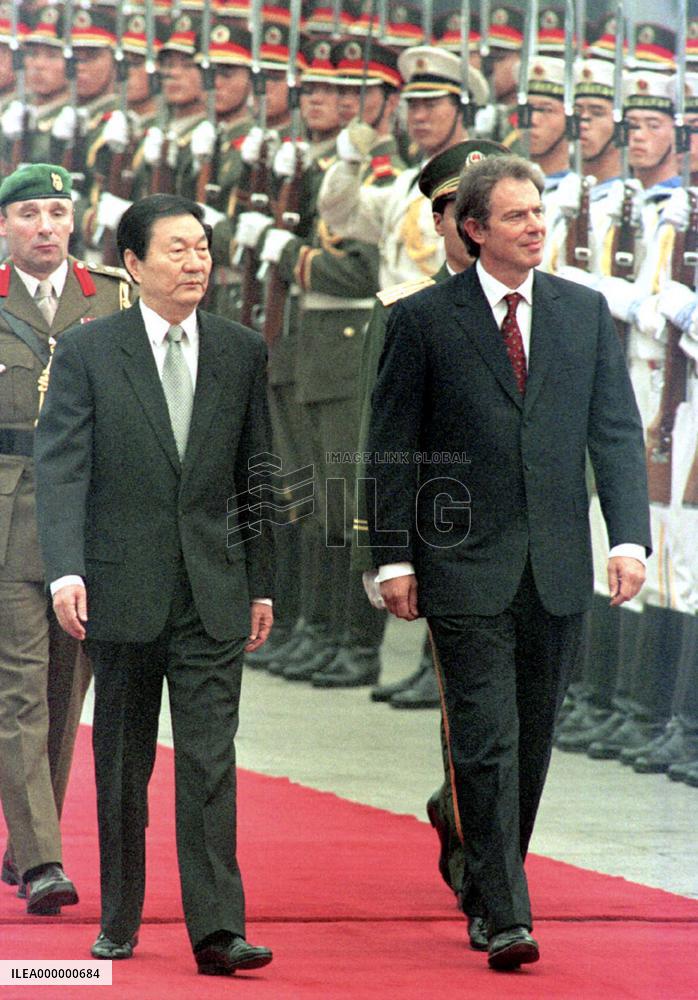 British Prime Minister Tony Blair (R), who is making a five-day official visit to China, inspects a guard of honor in front of the Great Hall of the People in Beijing on Oct. 6, along with Chinese Premier Zhu Rongji. Blair and Zhu agreed the same day that Chinese President Jiang Zemin will visit Britain in the latter half of 1999. They also signed a joint statement on strengthening bilateral ties. ==Kyodo

STORY: Libya plans to reopen all closed border crossings DATELINE: Feb. 8, 2023 LENGTH: 00:00:29 LOCATION: Tripoli CATEGORY: POLITICS SHOTLIST: 1. various of forces of the Libyan Illegal Immigration Control Department STORYLINE: The Libyan Illegal Immigration Control Department on Tuesday said that Libya plans to reopen all of the closed border crossings. The announcement was made after Mohamed al-Khoja, the head of the department paid a visit to the southwestern border city of Ghadames and met with local security officials. Al-Khoja discussed with the security officials strengthening security in the area and the efforts to fight illegal activities, mainly illegal immigration, according to a statement issued by the department. Al-Khoja also visited the Libyan-Algerian border crossing, where he opened the office of the immigration control department, the statement said. Taking advantage of Libya's insecurity and chaos since the fall of late leader Muammar Gaddafi's regime in 2011, many migrants, m (230207) -- BAGHDAD, Feb. 7, 2023 (Xinhua) -- Iraqi Foreign Minister Fuad Hussein (R) shakes hands with Russian Foreign Minister Sergei Lavrov in Baghdad, Iraq, on Feb. 6, 2023. Russian Foreign Minister Sergei Lavrov held meetings with top Iraqi leaders on Monday in Baghdad to discuss bilateral ties and unpaid arrears to Russian energy companies in Iraq due to U.S. sanctions over the Russian-Ukrainian conflict. Iraqi Foreign Minister Fuad Hussein said in a joint press conference with Lavrov that the two sides "discussed how to deal with the dues of Russian companies operating in Iraq, and we will discuss this issue during our visit to Washington Wednesday." (Xinhua/Khalil Dawood)

STORY: 4 dead after refugee boat sinks off Greek island DATELINE: Feb. 6, 2023 LENGTH: 00:00:23 LOCATION: Athens CATEGORY: SOCIETY SHOTLIST: 1. various of the rescue of refugees and migrants in a boat in the Aegean Sea STORYLINE: Three children and a woman died after a boat carrying yet unknown number of refugees and migrants sank off the island of Leros in the Aegean Sea, Greek national news agency AMNA reported on Sunday. The body of the woman was collected in the sea, the Hellenic Coast Guard said in a statement on Sunday. The three children had been transferred to a local hospital where they died, AMNA reported, citing the local Port Authority. A total of 39 people were rescued, according to the latest count, and many were of African descent, according to AMNA. Survivors told authorities there were about 40 people, among them minors and a person with disabilities, on board the dinghy that had set sail from the Turkish coast, a Hellenic Coast Guard statement said. A search and rescue operat (230204) -- YINGKOU, Feb. 4, 2023 (Xinhua) -- Tourists pose for photos in front of a lantern at Liaohe ancient street in Yingkou, northeast China's Liaoning Province, Feb. 3, 2023. The Liaohe ancient street has been decorated with various lanterns to greet the Lantern Festival, the 15th day of the first month of the Chinese lunar calendar, which falls on Feb. 5 this year. (Xinhua/Yao Jianfeng) (230204) -- YINGKOU, Feb. 4, 2023 (Xinhua) -- A tourist poses for photos in front of a lantern at Liaohe ancient street in Yingkou, northeast China's Liaoning Province, Feb. 3, 2023. The Liaohe ancient street has been decorated with various lanterns to greet the Lantern Festival, the 15th day of the first month of the Chinese lunar calendar, which falls on Feb. 5 this year. (Xinhua/Yao Jianfeng) (230203) -- RIGA, Feb. 3, 2023 (Xinhua) -- Polish President Andrzej Duda, accompanied by Latvian President Egils Levits (not in the picture), inspects the guard of honor during an official welcome ceremony in Riga, Latvia, on Feb. 1, 2023. (Photo by Edijs Palens/Xinhua)