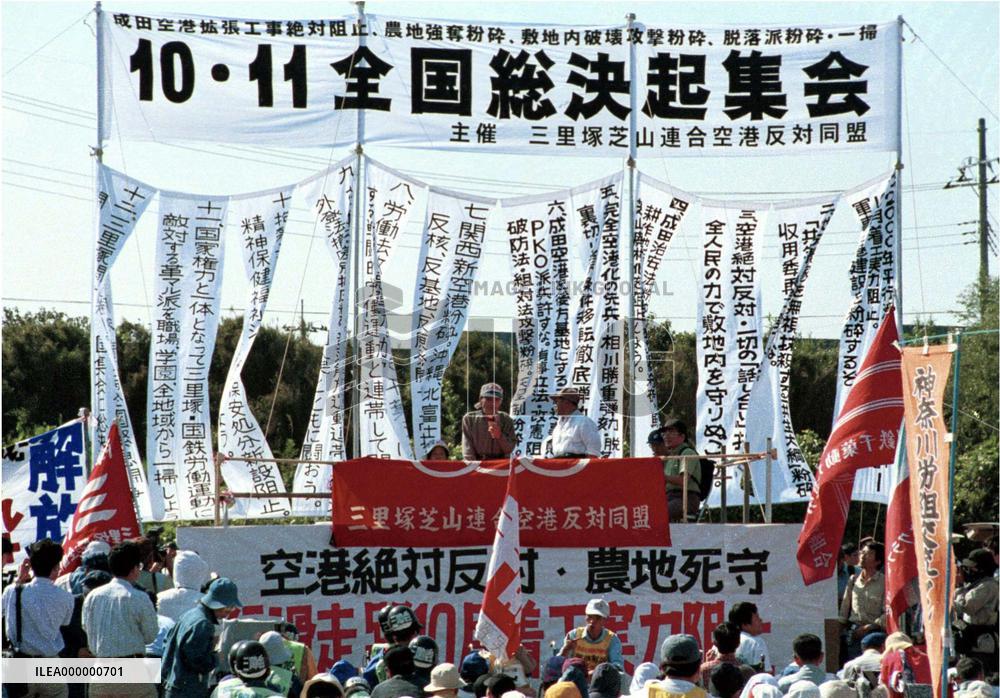 Some 1,500 protesters gather in Narita on Oct. 11 to oppose the expansion of Narita airport, demanding the government scrap a plan to complete a second runway by the end of fiscal 2000. Koji Kitahara, the organizer of the rally, said, ''The government is poised to start construction on the runway by the end of the fall. We will make every effort to stop it.'' The government proposes constructing a 2,500-meter runway, which would parallel the existing 4,000-meter runway, at Japan's main international airport east of Tokyo. BANGKOK, Thailand - A woman holds up a picture of ousted Prime Minister Thaksin Shinawatra during an antigovernment rally in Bangkok on May 6, 2010. Protesters of the United Front for Democracy against Dictatorship, who support Thaksin, said they will propose a counter-proposal to a reconciliation plan offered by the government before dispersing from Bangkok's business district. (Kyodo) HANOI, Vietnam - Photo taken recently shows a small airport that Vietnam has begun to construct on the disputed Spratly Islands in South China Sea. A Vietnamese tourism official said the airport, with a runway of 600 meters on Truong Sa Lon (Large Spratly), is expected to be completed by the end of 2004. The islands are claimed all or in part by Brunei, China, Malaysia, the Philippines, Taiwan and Vietnam. (Kyodo) NARITA, Japan - The New Tokyo International Airport Authority submits on Sept. 3 to the Transport Ministry an amended plan to build a 2,180-meter interim runway at Narita airport. According to the plan, The interim runway would be shifted about 800 meters northward (downward in the photo) compared with the original plan, to avoid tracts of land whose owners have refused to sell them. YOKOSUKA, Japan - A 1,000-meter-long steel platform to be used in the construction of an experimental floating runway is shown to the press and local government officials off Yokosuka, Kanagawa Prefecture, on Aug. 10. The platform, called ''megafloat,'' is being developed mainly by the Transport Ministry. OSAKA, Japan - A ceremony to begin a land-reclamation work to construct a second runway off Osaka Prefecture, western Japan, is held at the offshare airport on Aug. 7. The photo shows officials and guests of Kansai International Airport Co. participating in the ceremony. The round-the-clock airport has a single 3,500 meter runway.