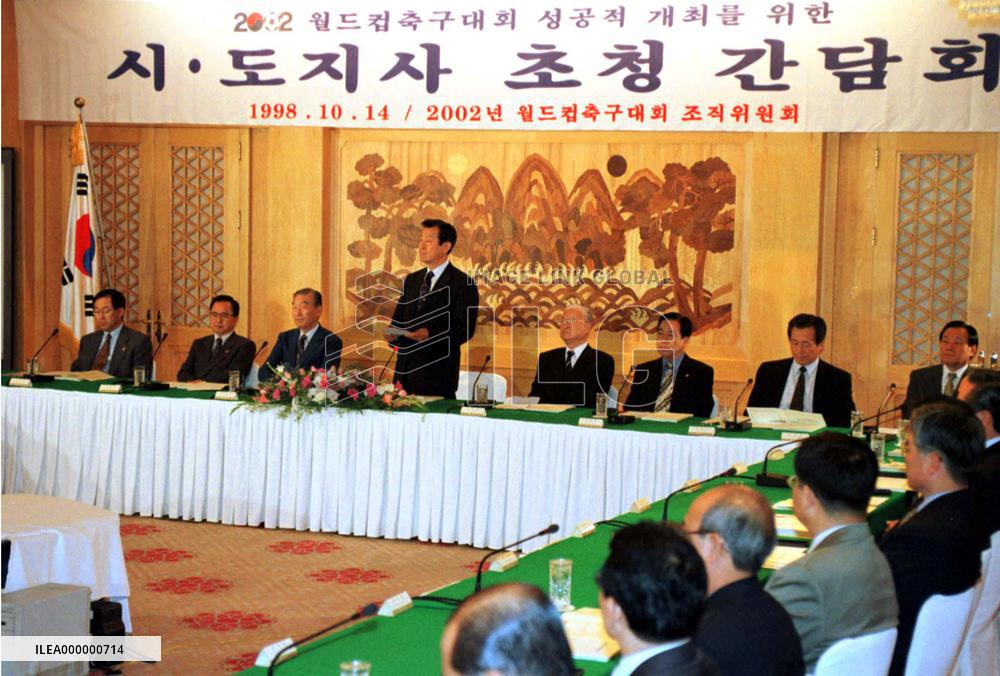 The heads of the South Korean cities and provincial governments to host 2002 World Cup soccer games meet in Seoul on Wednesday Oct. 14. Park Seh Jik, the head of the country's 2002 World Cup organizing committee, told the meeting that the games will be hosted in 10 Korean cities as originally planned. The World Cup matches are to be jointly staged with Japan.

STORY: S. Korea's employment growth slows for 5th month in October DATELINE: Nov. 10, 2022 LENGTH: 00:01:01 LOCATION: Seoul CATEGORY: ECONOMY SHOTLIST: 1. various of street views of Seoul 2. various of job seekers receiving counseling and interviews (courtesy of Yonhap TV) 3. various of workers at factories (courtesy of Yonhap TV) STORYLINE: South Korea's employment growth continued to slow for the fifth consecutive month in October amid rising economic uncertainty such as interest rate hikes, statistical office data showed Wednesday. The number of those employed totaled 28,418,000 in October, up 677,000 from a year earlier, according to Statistics Korea. Jobs kept expanding for 20 months since March last year, but the year-over-year job increase slowed from 935,000 in May to 841,000 in June, 826,000 in July, 807,000 in August and 707,000 in September respectively. Uncertainty mounted over the economy amid the higher interest rates that raised worry about the economic downturn. The country's central ba SEOUL, South Korea - Korean professional wrestling legend Kim Il, who went by the Japanese name Kintaro Oki and won fame in both Japan and South Korea, died in a Seoul hospital on Oct. 26. He was 77. Kim, master of the head-butt knockout in matches, became a wrestling star in Japan in 1960s and 1970s. This photo was taken in February, 2004. (Kyodo) INCHEON, South Korea - FIFA President Sepp Blatter arrives at South Korea's Incheon International Airport outside Seoul on May 23 ahead of the opening of the World Cup soccer finals staring May 31. INCHEON, South Korea - FIFA President Sepp Blatter answers questions from reporters after arriving at South Korea's Incheon International Airport outside Seoul on May 23 ahead of the opening of the World Cup soccer finals staring May 31. Over 200,000 World Cup tickets yet to be delivered in Japan

TOKYO, Japan - Shinichiro Misono (L), a senior official from the Japan Organizing Committee for the 2002 World Cup (JAWOC) in charge of tickets for World Cup matches to be held in Japan, speaks at a press conference in Tokyo on May 16 about a delay in ticket delivery. JAWOC said over 200,000 tickets for the World Cup soccer finals, or nearly 30% of all sold domestically, had not been delivered to buyers as of May 16. 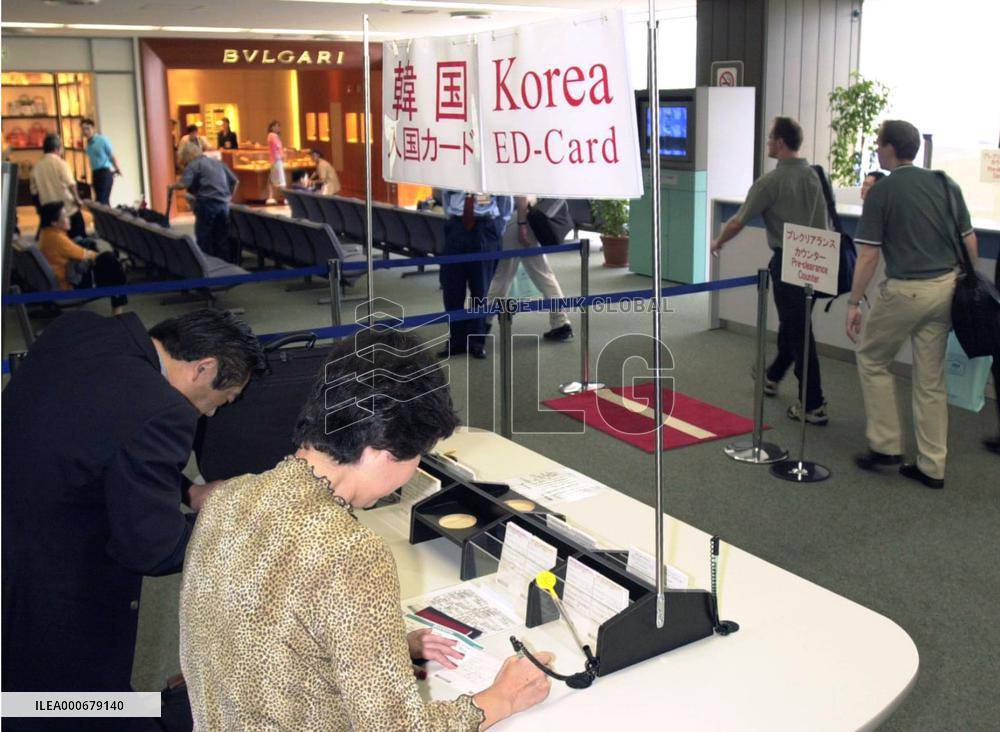 NARITA, Japan - Japanese tourists leaving for South Korea fill in their pre-arrival immigration clearance card at Narita airport on May 15. Japan and South Korea, wary of massive airport congestion during the World Cup, kicked off a system whereby air travelers between the countries can go through arrival immigration procedures before boarding their flight. The system will be in effect at Narita airport near Tokyo and Incheon airport in South Korea until the World Cup soccer tournament ends June 30. TOKYO, Japan - Photo shows three types of 500-yen nickel brass coins to be issued by the Finance Ministry next spring to mark the 2002 World Cup soccer finals to be co-hosted by Japan and South Korea. The 500-yen coins are the same size as those currently in circulation and will have a world map and players on the head and a soccer ball, the emblem and a symbol indicating the length of a game on the back.