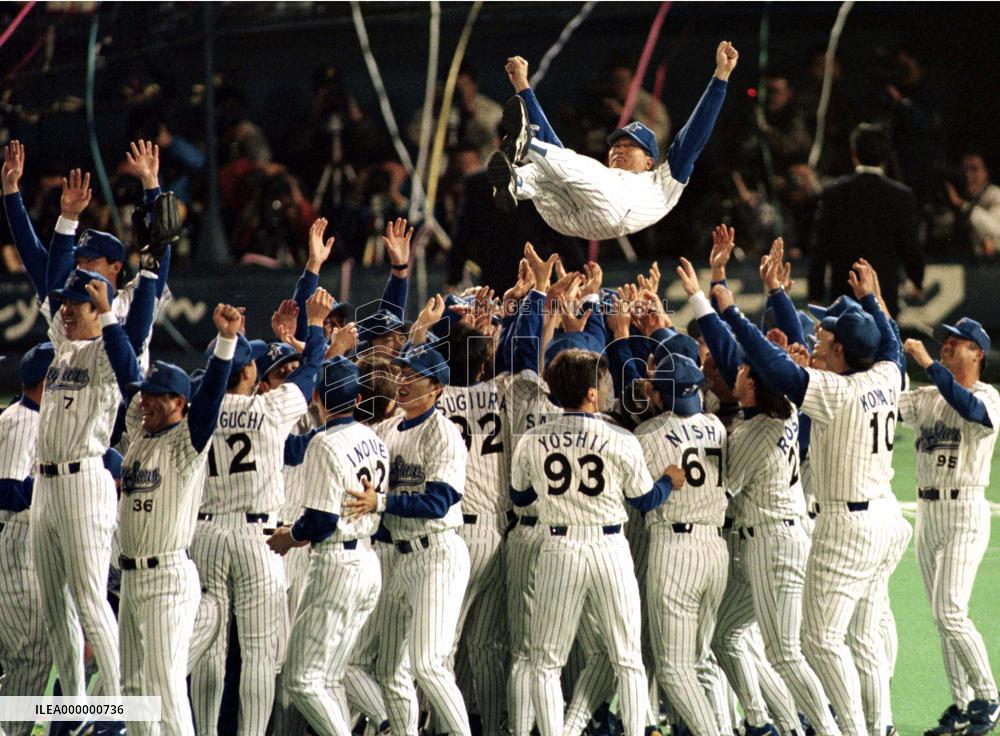 Yokohama BayStars manager Hiroshi Gondo is tossed into the air after the team won the Japan Series championship Monday Oct. 26 at Yokohama Stadium. Yokohama, claiming the championship in six games, won its first title in 38 years and only the second in franchise history after the Taiyo Whales swept the Daimai Orions for the crown in 1960.

STORY: Social media marketing helps boost tea oil sales in Chinese village DATELINE: Dec. 3, 2022 LENGTH: 00:01:04 LOCATION: GUIYANG, China CATEGORY: ECONOMY/SOCIETY SHOTLIST: 1. various of the tea-oil trees 2. SOUNDBITE 1 (Chinese): YANG YUN, Vlogger 3. SOUNDBITE 2 (Chinese): LIANG GUOHONG, Party Chief of Pingjiang Town STORYLINE: In Barui Village, Pingjiang Town, southwest China's Guizhou, tea-oil tree planting has a history of over 100 years. As the tea-oil camellia fruits in the village are ready to be harvested recently, the local government has invited livestreaming anchors and vloggers to help promote the sales of tea-oil products. SOUNDBITE 1 (Chinese): YANG YUN, Vlogger "We have seven on our team to do the short video, through which we want to promote the tea oil here. We want to show people how the tea-oil camellia grows." Through social platforms, millions of people across the country watched the process of fruit collection and oil extraction, and placed their orders. More than 12,000 hecta

STORY: Mixed relay of board-shoe racing shows charm of China's traditional sports DATELINE: Nov. 18, 2022 LENGTH: 00:01:13 LOCATION: NANNING, China CATEGORY: SPORTS SHOTLIST: 1. final of the 4x100m mixed board-shoe racing relay STORYLINE: A team from a local college won the first place in the final of the 4x100m mixed board-shoe relay at the 15th Guangxi Traditional Games of Ethnic Minorities on Sunday in China's Guangxi Zhuang Autonomous Region. Board-shoe racing is a traditional sport in China with three people running in a pair of wooden board-shoe, which requires perfect coordination and concentration. The board-shoe racing, with a history of more than 400 years, is popular among ethnic minority groups in Guangxi. In 2005, it became an official competition event at the National Traditional Games of Ethnic Minorities in China. Xinhua News Agency correspondents reporting from Nanning, China. (XHTV) (220630) -- CHANGSHA, June 30, 2022 (Xinhua) -- Liu Zhengwen makes Yuezhou fan at his "Baling fan studio" in Yueyang City, central China's Hunan Province, June 23, 2022. Yuezhou fan dates back to the late Ming Dynasty (1368-1644) and early Qing Dynasty (1644-1911). The fan, having a history of about 400 years, is one of the most famous fans in China for its delicacy. Using fine bamboo as its framework, ox horn as the nail, and Xuan paper as the cover, the fan goes through 72 complicated procedures before done, while the making of framework requires most exquisite and skillful work. The crafts of making Yuezhou fan was listed in the fifth batch of national intangible cultural heritages in 2021. Liu Zhengwen, 70 years old, a provincial intangible cultural heritage inheritor of Yuezhou fan, has been engaged in the crafts for 56 years. Enrolled into a Yueyang fan making factory in the 1970s, Liu witnessed himself the declining of the fan factory with the popularity of electric fans and air conditioners. After