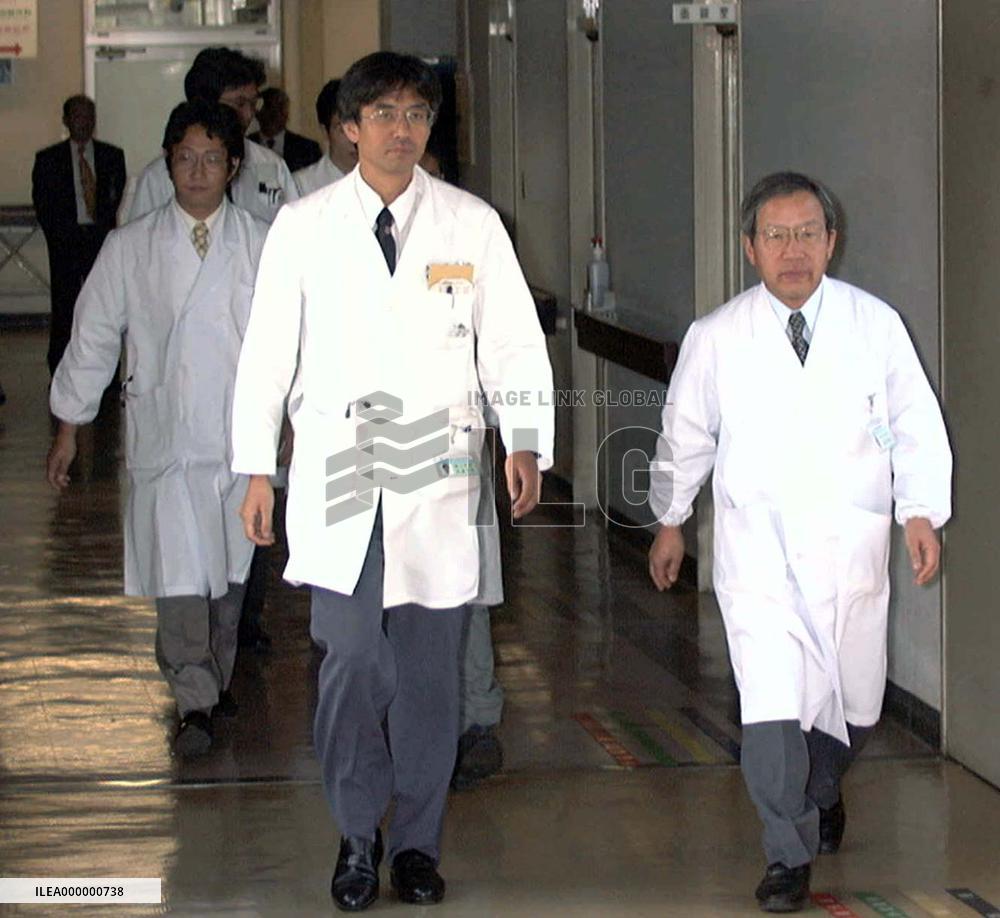 A medical team of Okayama University Hospital, led by Professor Nobuyoshi Shimizu (R), walks into an operating theater on Wednesday Oct. 28 for Japan's first lung transplant operation on a 24-year-old woman. In the seven-hour operation, half of the left lung of the woman's 48-year-old mother and one-third of the right lung of her 21-year-old sister will be transplanted. ==Kyodo TOKYO, Japan - Photo shows Shorbanu Khatun, a 35-year-old Bangladeshi mother of four, who testified on Nov. 17, 2011, about the impact of climate change on her livelihood during a meeting in Tokyo attended by Japanese lawmakers. The widow from the village of Gabura in the Satkhira district, a coastal area in southwestern Bangladesh vulnerable to flooding, spoke about the plight of her children. (Kyodo) NAGOYA, Japan - Fumiko Isogai, the mother of 31-year-old company employee Rie Isogai, speaks during a news conference in Nagoya on March 18 after the Nagoya District Court sentenced two men to death and one to life in prison for murdering Rie in 2007 in a crime that caught public attention as an Internet site was used to attract ''crime mates.'' (Kyodo) OSAKA, Japan - Japanese comedian Kampei Hazama exchanges high-fives with his fans at the Nanba Grand Kagetu theater in Osaka on Dec. 17 as he sets off on a trip around the world combining marathon running and yachting aiming to cover 20,000 kilometers on land and 16,000 km at sea over a period of about two-and-a-half years. Updates on the journey, which is scheduled to take the 59-year-old comedian to the Atlantic Ocean, Europe and Asia before he returns to Japan, will be posted regularly on the Internet, organizers of the ''Earth Marathon'' event said. (Kyodo) Obstetrician acquitted of death during C-section

FUKUSHIMA, Japan - Katsuhiko Kato, a 40-year-old obstetrician, heads to the Fukushima District Court on Aug. 20. The court acquitted Kato of charges that he caused a 29-year-old woman to die from blood loss during a cesarean operation at a general hospital in Fukushima Prefecture, northern Japan, in 2004. (Kyodo) SAPPORO, Japan - Skye Budnick, a 21-year-old female college student from the United States, has been missing since arriving in Hokkaido on April 2, her mother Susan (R) and sister Megan (L with picture of Skye) said in Sapporo on April 15, asking Japanese people to come forward with any information they may have about her. (Kyodo) AKITA, Japan - File photo of Mika Shindo, a 32-year-old woman who was sentenced to 14 years in prison on Aug. 6 for abusing and killing her 4-year-old son in Daisen, Akita Prefecture last year. According to the Akita District Court's ruling, Shindo was together with her son and her boyfriend Hiroshi Hatakeyama, 44, inside a car on the day when she beat him on the head, seized him by the throat and later left him to die in an irrigation ditch near her home. The two were allegedly irritated by Ryosuke's presence in their date. (Kyodo) OTARU, Japan - Kimiko Jose, a 63-year-old war-displaced woman left behind in Palau by her Japanese mother toward the close of World War II, wipes tears during her first visit to her mother's grave in Otaru, Hokkaido, on July 19. (Kyodo) LEAD:Iranian girl of family to be deported enrolls in Japanese s

MAEBASHI, Japan - Amine Maryam (R), 18, the elder daughter of an Iranian couple facing deportation from Japan, sheds tear at a news conference held in Ikuei Junior College in Takasaki, Gunma Prefecture, where she enrolled on April 4. Maryam's father, Amine Khalil (L), 43, her mother and her 10-year-old sister, who was born in Japan, will be deported later this month while Maryam, who has lived most of her life in Japan, has received a special residency permit so she can attend school. (Kyodo) TOKYO, Japan - Media representatives crowd outside the murder scene in Shibuya, Tokyo where the dismembered body of a 20-year-old woman, the daughter of dentist parents, was found on Jan. 3. Her brother, 21, was arrested on Jan. 4 and told police that he had killed her. His sister's body was found severed into more than 10 parts. (Kyodo) TOKYO, Japan - Police detectives investigating on Jan. 4 the murder in the residence of a dentist in Shibuya, Tokyo where the dismembered body of a 20-year-old woman, the daughter of dentist parents, was found on the previous day. Her brother, 21, was arrested on Jan. 4 and told police that he had killed her. His sister's body was found severed into more than 10 parts. (Kyodo)