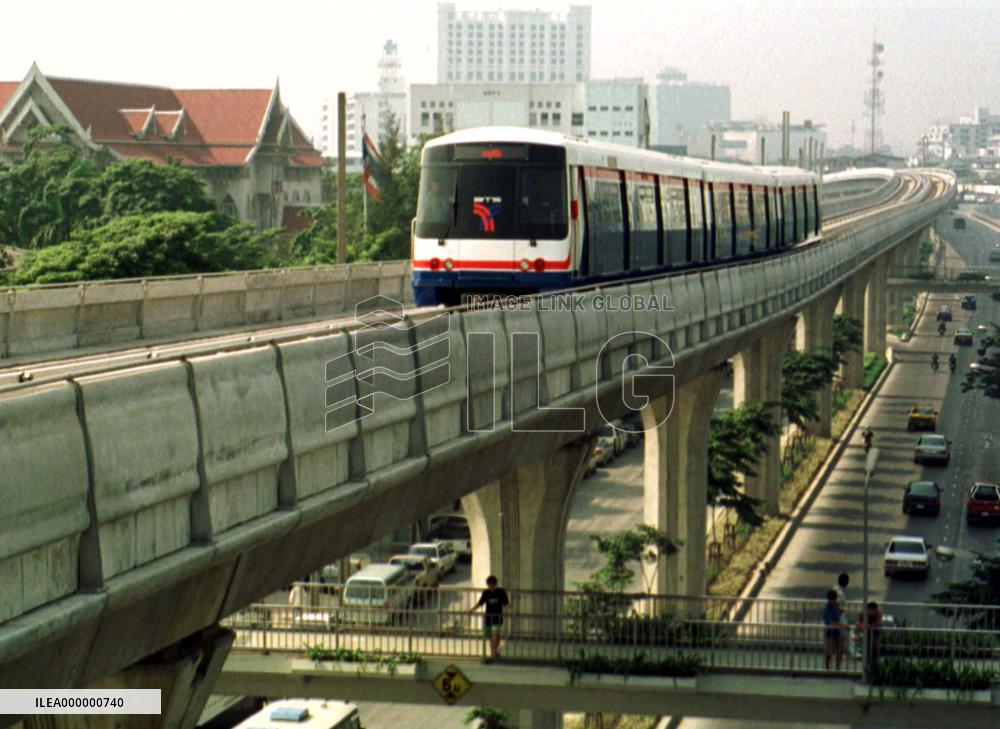 Thailand's first elevated mass transit train undergoes an official test run in Bangkok on Tuesday Oct. 27 with a full load of VIP passengers, the company that operates the train said. The Bangkok Mass Transit System Co. train, which runs on a track 12 meters above the ground, is due to begin operations on Dec. 5 next year to coincide with the birthday of King Bhumibol Adulyadej. ==Kyodo NAGOYA, Japan - A linear motor car makes a test-run to the Aichi World Exposition site in Aichi Prefecture on Feb. 25 prior to the start of official operations on March 6. While on board the car, passengers can see images introducing the exposition on windows. The exposition will open March 25 and run through Sept. 25. (Pool photo)(Kyodo) TOKYO, Japan - Police investigate the derailment of a Tokyo subway train on an above-ground track March 8. The train collided with another running on the opposite track, killing three passengers and injuring 31. The collision occurred at 9:01 a.m. about 150 meters northeast of Nakameguro Station in Tokyo's Meguro Ward, on the Hibiya Line operated by Teito Rapid Transit Authority, also known as Eidan. The tail car of the southbound eight-car train, which was about to arrive at the terminal station on the line, derailed on a curve just after leaving a tunnel. SEOUL, South Korea - This photo is of South Korea's first high-speed train which made a test run on a 34-km section of track between Chonan and Taejon at 200 kph. South Korean President Kim Dae Jung rode on the trial run. When completed in 2004, the train will run from Seoul to Pusan in one hour and 56 minutes at a maximum speed of 300 kph. A magnetically levitated train hits a record speed of 552 kilometers per hour April 14, making it the fastest rail-based vehicle in history. The test run of a manned, five-car train made a record for any kind of vehicle that runs on rails, manned or unmanned, said officials who operate the experimental track in Yamanashi Prefecture, west of Tokyo.