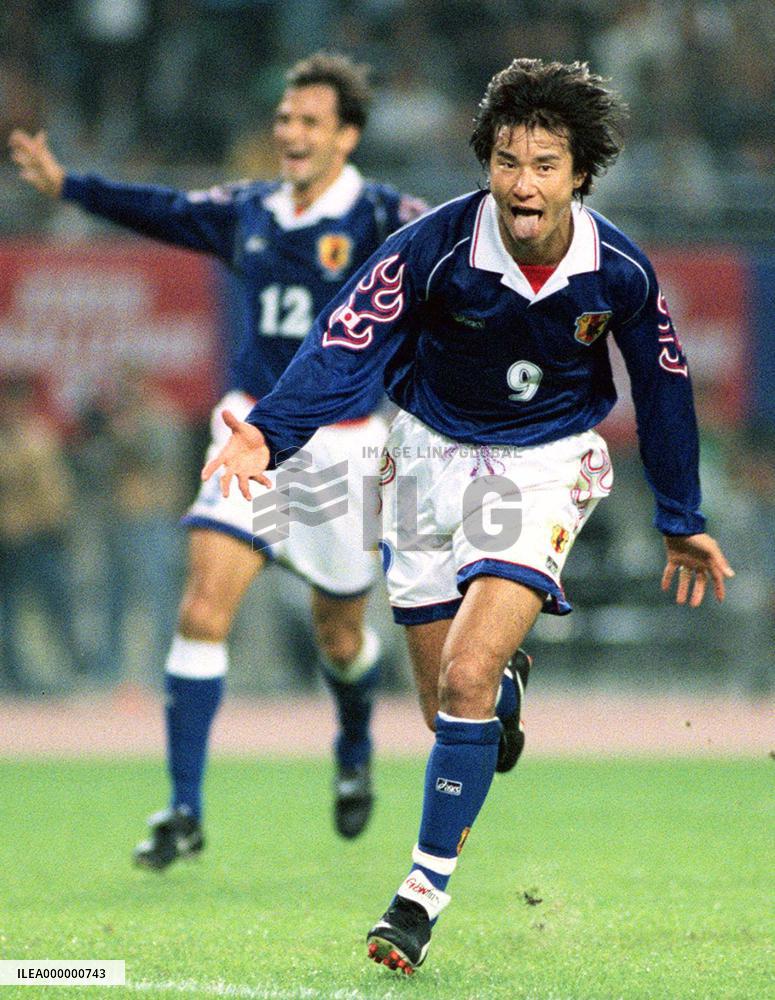 Jubilo Iwata forward Masashi Nakayama runs in jubilation after converting a 25th-minute penalty to give Japan a 1-0 victory over Egypt in a friendly match at Osaka's Nagai Stadium on Wednesday Oct. 28. Running in the back is Nakayama's partner Wagner Lopes. FUKUROI, Japan - Belgium forward Marc Wilmots scores the team's third goal in the 82nd minute of a group H match at Nagai Stadium on June 14. Belgium advanced to the second round by beating Russia 3-2. (World Cup 2002) NIIGATA, Japan - Mexico forward Cuauhtemoc Blanco celebrate his goal from the penalty spot in the 60th minute of a group G match against Croatia in the World Cup finals at Niigata Stadium Big Swan on June 3. (World Cup 2002) 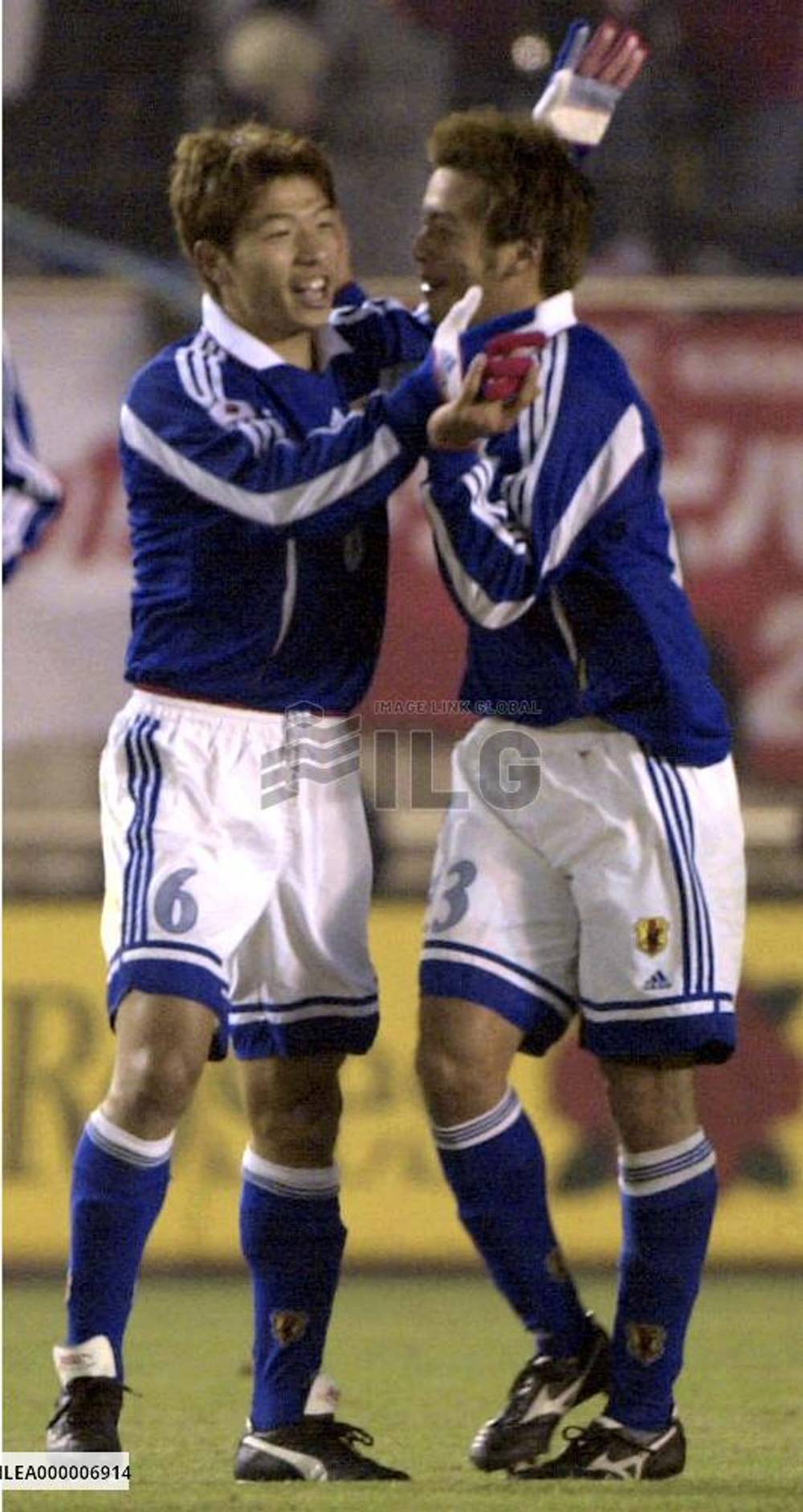 Hattori on target for Japan in 1-1 draw with S. Korea

TOKYO, Japan - Japanese defender Toshihiro Hattori (L) is congratulated by teammate Atsushi Yanagisawa after heading in Japan's 57th minute equalizer against South Korea in a friendly international match at Tokyo's National Stadium on Dec. 20. Yanagisawa missed a penalty earlier in the match between the two countries that will co-host the 2002 World Cup. 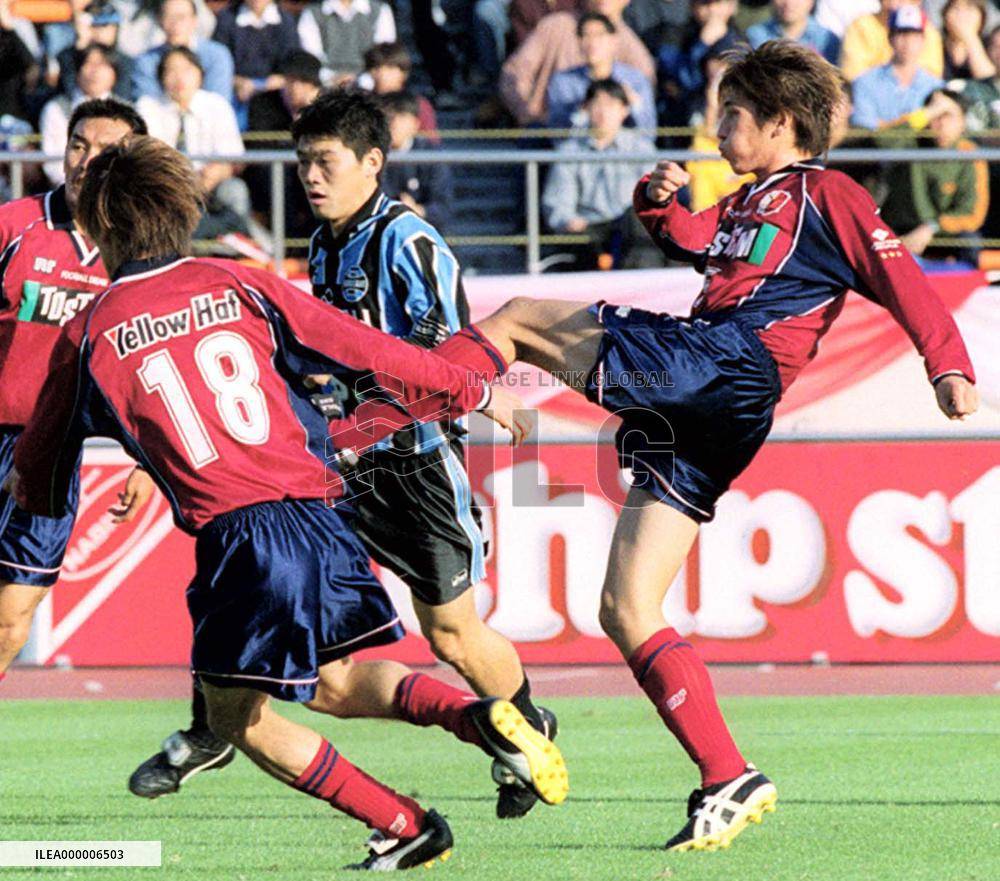 TOKYO, Japan - Japan under-23 midfielder Koji Nakata (R) fires Kashima Antlers into a 32nd-minute lead against Kawasaki Frontale in the J-League Nabisco Cup Final on Nov. 4 at Tokyo's National Stadium. Nakata received the Man of the Match award in the game that Kashima went on to win 2-0. BEIRUT, Lebanon - Midfielder Shigeyoshi Mochizuki (C) jumps in jubilation after sweeping in a free kick from Shunsuke Nakamura in the 30th minute, scoring Japan's only goal in their 1-0 win over Saudi Arabia in the Asian Cup final Oct. 29 at Beirut Sports City Stadium. Japan won their second Asian Cup title, the first since 1992 when they also edged the Saudis 1-0 in the final in Hiroshima. OSAKA, Japan - China's Sun Tianni hoists 142.5 kilograms to reach a new standard in the 75-kg clean and jerk on her way to victory with a world record total of 257.5 kg in the women's heavyweight division at the Asian weightlifting championships at Osaka's Nagai stadium gymnasium on May 6. Nakayama zeroes in on goal in Asian Cup qualifier

MACAO, - Jubilo Iwata forward Masashi Nakayama heads for goal in the first half of Japan's Asian Cup qualifying match with host Macao on Feb. 20. Nakayama broke through a tight Macao defense in the 35th minute to give Japan a 1-0 lead at the intermission as the Japanese were virtually assured a berth in the Asian Cup finals this October in Lebanon. SHIMIZU, Japan - Jubilo Iwata forward Masashi Nakayama leaps into the arms of goalkeeper Yushi Ozaki on Dec. 11 at Nihondaira stadium after his team defeated Shimizu S-Pulse 4-2 in a penalty shoot-out to win the J-League championship.