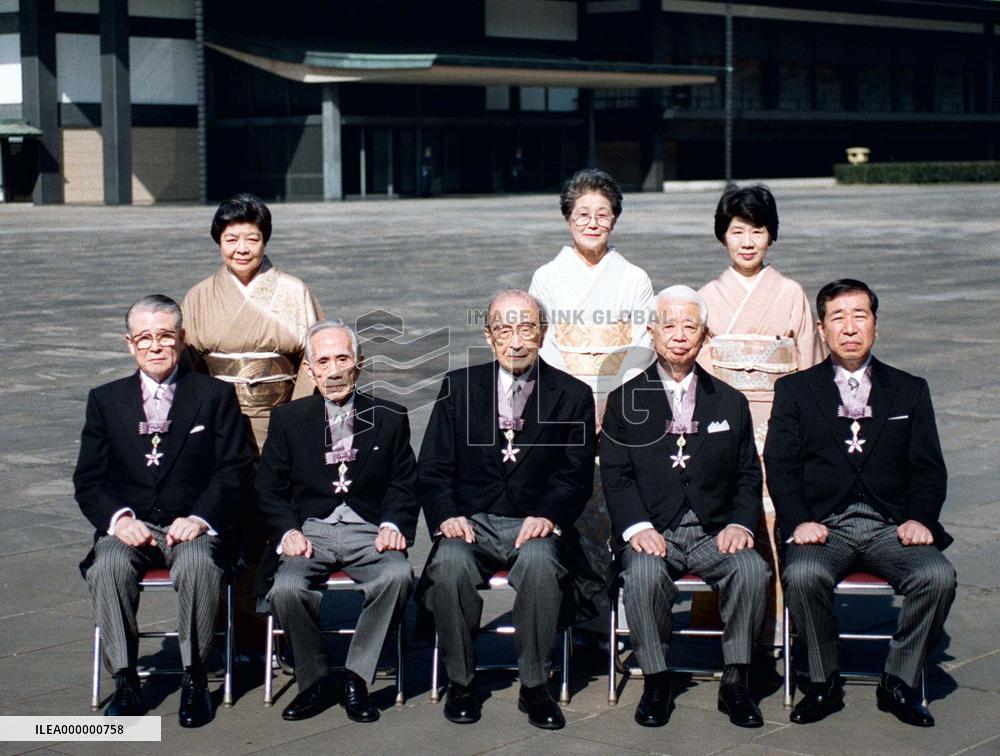 Recipients of Order of Culture awards TOKYO, Japan - Former Yomiuri Giants' Manager Shigeru Nagashima, who suffered a stroke in 2004, wears sneakers with ''3,'' his player's uniform number in the Yomiuri Giants, at a tea party hosted by Emperor Akihito and Empress Michiko Nov. 4 for this year's recipients of the Order of Culture and other decorations at the Imperial Palace. (Pool photo)(Kyodo) TOKYO, Japan - Former Yomiuri Giants' player Shigeru Nagashima (C, front and back to photographer), who suffered a stroke in 2004, greets Emperor Akihito and Empress Michiko (both in center at back) at a tea party hosted by the imperial couple Nov. 4 for this year's recipients of the Order of Culture and other decorations at the Imperial Palace. He wears sneakers with his uniform number of 3 attached. (Pool photo)(Kyodo) TOKYO, Japan - File photo, taken on Nov. 3, shows Fukuko Okubo, Japan's most celebrated leather artisan, who died at 81 on the evening of Nov. 4 at a hospital in Tokyo. Her death came just one day after she received the Order of Culture from Emperor Akihito at the Imperial Palace along with Nobel laureate Hideki Shirakawa and four others. Shirakawa, 5 others awarded Order of Culture by emperor

TOKYO, Japan - Nobel laureate Hideki Shirakawa (Far L) and five others sit in a photo session Nov. 3 at the Imperial Palace after they were awarded this year's Order of Culture by Emperor Akihito. Next to Shirakawa is leather craftswoman Fukuko Okubo, 81, followed by calligrapher Kason Sugioka, 87, actress Isuzu Yamada, 83, sinologist Tadao Ishikawa, 78, and organic chemist Ryoji Noyori, 62. At the ceremony, which started at 10:30 a.m., the emperor decorated each of the recipients, who then received a certificate from Prime Minister Yoshiro Mori.