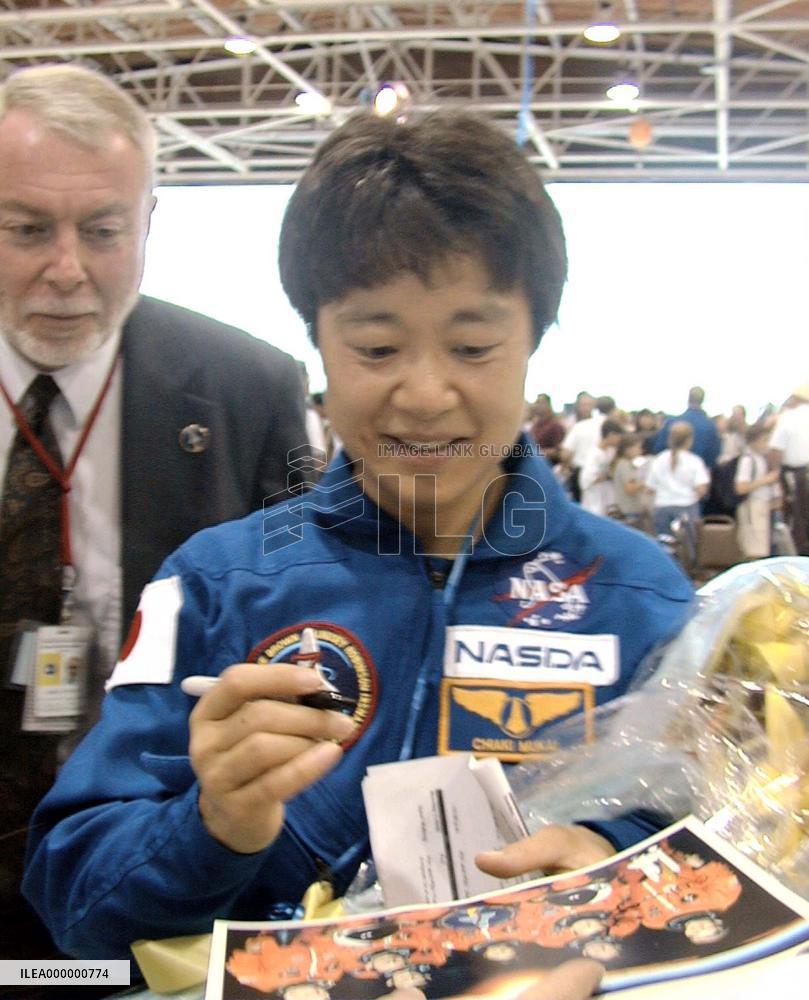 Astronaut Chiaki Mukai autographs pictures of U.S. space shuttle Discovery's crew Nov. 8 at a gathering in Houston, Texas, after the shuttle returned to Earth on Nov. 7 in Florida. Mukai, 46, is Japan's first female astronaut and the first Japanese to travel twice in space. Space shuttle Discovery moved to launch pad for May launch

HOUSTON, United States - Japanese astronaut Soichi Noguchi, who is scheduled to be aboard the space shuttle Discovery, briefs reporters on gadgets attached to a space suit at the Johnson Space Center in Houston, Texas, on April 6. The Discovery was transferred the same day to the launch pad from the vehicle assembly building in the Kennedy Space Center in Florida ahead of its planned launch in May. (Kyodo) TOKYO, Japan - Japanese astronaut Koichi Wakata (on the video screen) speaks from Houston, Texas, to reporters in Tokyo via videophone Nov. 15. He said he feels as if his October space shuttle mission was like a dream. Wakata, 37, and six other astronauts conducted a successful mission Oct. 11-24 to add essential components to the International Space Station. HOUSTON, United States - Japanese astronaut Koichi Wakata on Oct. 15 displays a piece of paper on which he composed a poem, in traditional Japanese style, about the Earth as seen from the space shuttle Discovery. ''The green grass of the Earth is glittering in the limitless darkness of space,'' Wakata said into a television camera in the spacecraft. Commander Brian Duffy is at his left. Photo was taken from a TV broadcast by the National Aeronautics and Space Administration (NASA). CAPE CANAVERAL, United States - Japanese astronaut Mamoru Mohri, who will serve as ground support for the Discovery mission, fields questions from the press at the Kennedy Space Center at Cape Canaveral, Florida on Oct. 5 after the National Aeronautics and Space Administration postponed the shuttle's launch to Oct. 9 because of technical problems. The Discovery will carry a crew of seven, including Japanese astronaut Koichi Wakata. CAPE CANAVERAL, United States - A timer on Oct. 4 displays a countdown to liftoff of the space shuttle Discovery (background) Oct. 5 from Florida's Kennedy Space Center. It will carry a crew of seven, including Japanese astronaut Koichi Wakata. During an 11-day mission, the crew will add critical components to the International Space Station, and Wakata will be the first Japanese astronaut to visit it.