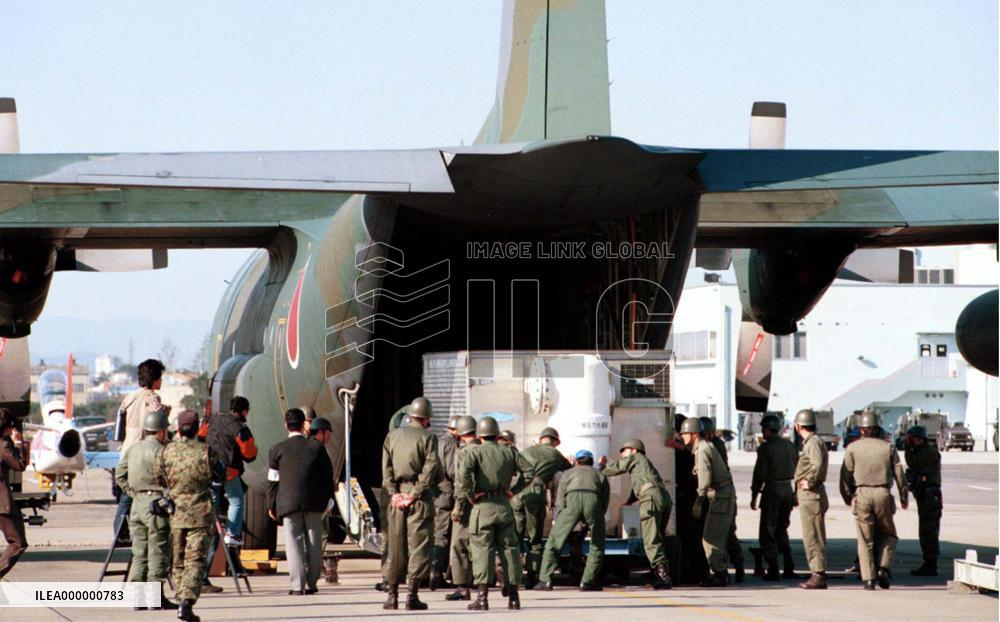 Japanese Self-Defense Forces (SDF) personnel load relief supplies bound for hurricane-hit Honduras at the SDF Komaki Base in Nagoya on Nov. 12. The dispatch of a relief team to Honduras was formally approved at a cabinet session Nov. 13. ==Kyodo JCP convention OKs use of SDF

ATAMI, Japan - Kazuo Shii, chief of the Secretariat of the Japanese Communist Party, speaks at a convention in Atami, southwest of Tokyo, on Nov. 24. The party adopted a significant revision to its platform approving the use of the Self-Defense Forces in emergencies in an apparent bid to promote itself a more moderate political party. NAGOYA, Japan - Members of a Japanese Air Self-Defense Force (ASDF) contingent are greeted by officers at the ASDF Komaki base near Nagoya on Feb. 9 on returning from a 10-week mission to airlift relief goods to East Timorese refugees. SDF can be sent to E. Timor if conditions met: Norota

TOKYO, Japan - Defense Agency chief Hosei Norota, speaking at the Japan National Press Club in Tokyo on Sept. 14, says that Japan can dispatch Self-Defense Forces personnel to East Timor only if conditions for Japanese participation in U.N. peacekeeping operations, as stipulated in a domestic law, are met. Norota stressed Japan should first focus on humanitarian and financial assistance to the violence-torn territory. Some 80 members of the Ground Self-Defense Force return home Dec. 5 after completing a relief mission in Honduras, one of the countries hit by a killer hurricane 5 weeks ago. The mission spent two weeks treating more than 4,000 people in and around Tegucigalpa. Hurricane Mitch ripped through Central America in October and November, killing more than 10,000 people and leaving thousands more missing and homeless. ==Kyodo Japan's Ground Self-Defense Force troops land Nov. 15 on the Iwojima Island from transport ship. The ground, maritime and air forces of Japan's Self-Defense Forces (SDF) held their first-ever joint drill Nov. 15 on Iwojima Island in the Pacific south of Tokyo. airborne troops descended from C-1 transport planes, while other vessels and aircraft supported the operation around the island.

The city is caved in and covered in mud after the Niigata earthquake. The government launches a full-scale rescue operation. <Caption> The entire city is on fire after the Niigata earthquake, people fleeing, firefighting, cracks in the ground, railroad tracks suspended in midair, the collapsed Hakusan station, victims washing their clothes in muddy water because there is no water, boats washed ashore, etc. Self-Defense Forces rescue activities, relief supplies being sent from all over, Minister of Finance Kakuei Tanaka arriving by helicopter, Self-Defense Forces repairing collapsed buildings and broken levees, etc. a train departs from a temporary platform four days later, shooting date unknown, release date: June 26, 1964.