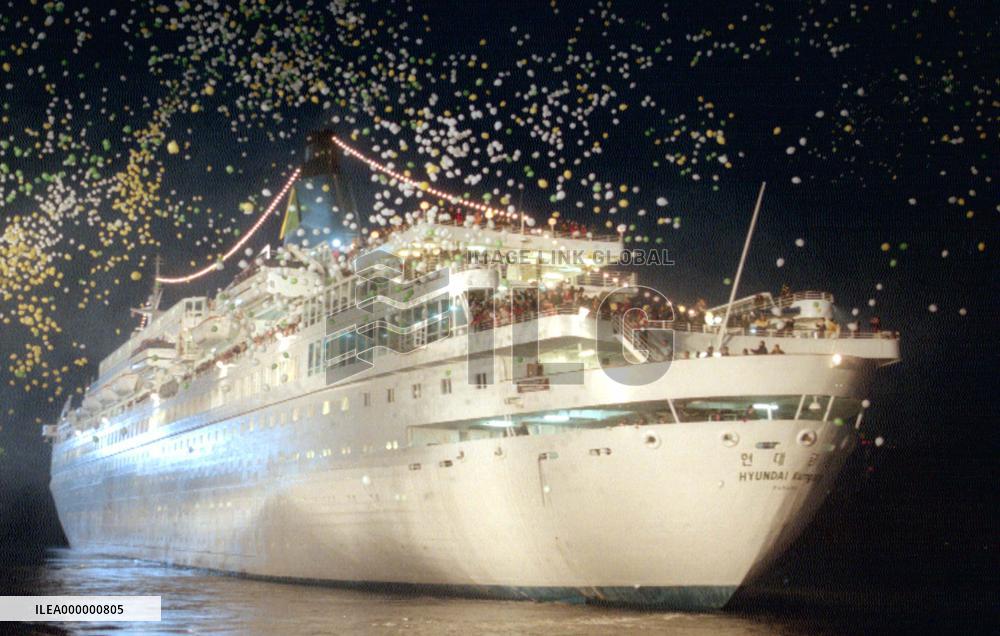 The Hyundai Kumgang, a cruise ship operated by South Korea's Hyundai Business Group, sets sail from Tonghae port on the east coast of South Korea on Nov. 18 for its first official sightseeing trip to North Korea's Mt. Kumgang. The first tourist ship service between North and South Korea since the end of the Korean War in 1953, is expected to become a major means of private-sector inter-Korean exchanges. ==Kyodo

STORY: Old oil tanker becomes new artificial reef for divers in Malta DATELINE: Aug. 30, 2022 LENGTH: 00:01:23 LOCATION: GOZO, Malta CATEGORY: SOCIETY SHOTLIST: 1. various of an oil tanker being scuttled STORYLINE: A 60-meter wide and 855-tonne heavy oil tanker was scuttled off Gozo island, Malta on Monday afternoon. It will start its new life as an artificial reef to attract divers from home and abroad. The tanker, formerly registered in Togo, ran aground on the coast of Malta in February 2018. It then retired from service as the repair cost was too high, according to Maltese media. Efforts to clean the tanker by removing all fuels and lubricants and some equipment as well had been done before it was scuttled. Maltese Tourism Minister Clayton Bartolo told journalists at the scene that Malta has not scuttled a ship this size for a few years and it will help Malta attract more divers. Malta is an attractive destination for divers and diving is also a key component of the country's tourism sector. In the

STORY: Tunisia welcomes 1st cruise ship with tourists since COVID-19 outbreak DATELINE: March 24, 2022 LENGTH: 00:01:41 LOCATION: Tunis CATEGORY: SOCIETY SHOTLIST: 1. various of cruise ship docking at La Goulette port 2. various of Tunisian welcoming foreign tourists STORYLINE: A cruise ship from Europe docked at the port of La Goulette in Tunis, Tunisia on Wednesday and hundreds of foreign tourists disembarked for sightseeing in Tunisia. It is the first foreign cruise ship to dock in Tunisia since the outbreak of COVID-19. The Tunisian Tourism Ministry announced in a statement in early March that it would strengthen safety and hygiene management to provide a good environment for tourists. The ministry said that the tourism industry in Tunisia will gradually recover from the impact of COVID-19 in 2022. More than 40 cruise ships are planned to dock at Tunisian ports this year, bringing a large number of foreign tourists to Tunisia and contributing to local economic development. Xinhua News Agency corres OSAKA, Japan - The British-registered luxury cruise ship Regal Princess carrying about 1,500 passengers from the United States and Europ enters Osaka port on April 21. The 13-day tour kicked off April 9 from China's Tianjin, with the ship making stops at South Korea's Pusan and Vladivostok in Russia, among other places.