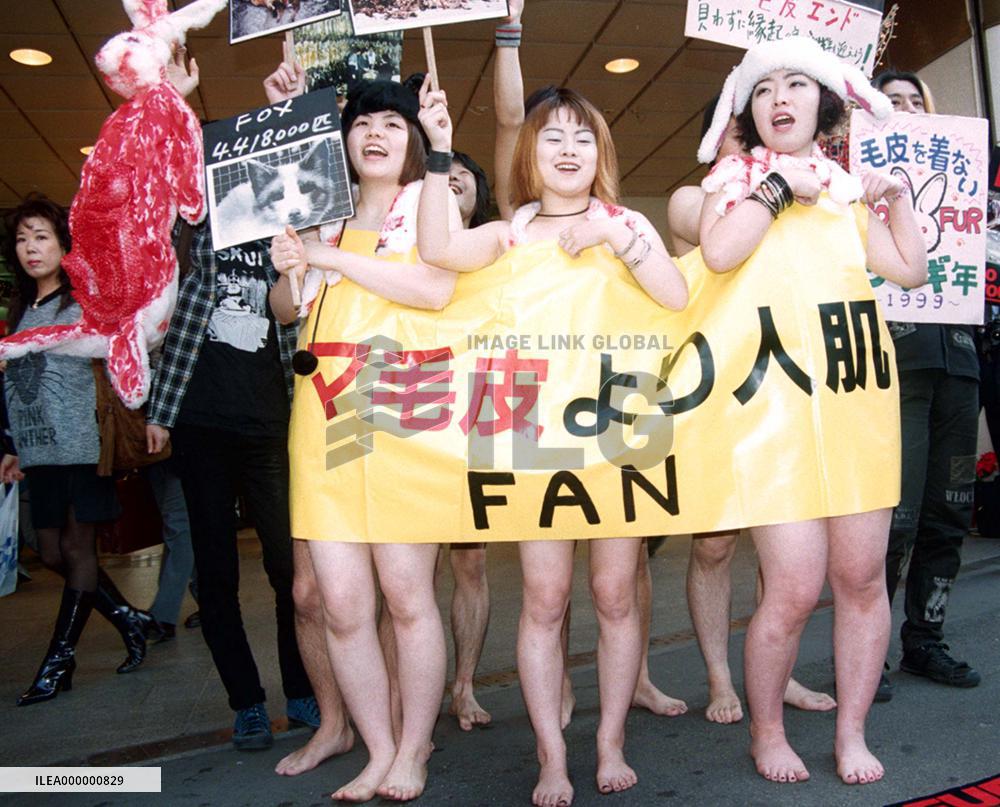 Holding placards and banners, members of an antifur citizen's group protest against the killing of animals for fur outside the West exit of JR's Shinjuku station in Tokyo on Tuesday Nov. 24. The group, called Free Animals Network, started the antifur campaign in 1994. ==Kyodo TOKYO, Japan - Police searching the Tokyo branch of the General Association of Korean Residents in Japan face protest from group members in front of the office Nov. 27. The association is suspected of being involved in unauthorized transactions of an intravenous solution intended for shipment to North Korea. (Kyodo) OSAKA, Japan - Hiroshi Wasano is arrested and escorted to an Osaka police station on March 7. Working with five other members of a moneylender, Wasano collected illegally high interests on loans through intimidation -- eventually leading to the suicide of a man, his wife and her elder brother in the city of Yao, Osaka Prefecture, in June 2003, police said. (Kyodo) TOKYO, Japan - Supporters of a group of Chinese victims and relatives seeking compensation from the Japanese government for casualties stemming from Japan's campaign of germ warfare waged in China during World War II shout their protest outside the Tokyo High Court on July 19 after the dismissed an appeal by the plaintiffs. (Kyodo) BEIJING, China - Chinese farmers hold banners in front of the Japanese Embassy in Beijing on Aug. 16 to protest the visit to Tokyo's Yasukuni Shrine the previous day by four Japanese Cabinet members. (Kyodo) TOKYO, Japan - Two semi-naked female activists from People for the Ethical Treatment of Animals (PETA) protest in Tokyo's fashionable Shibuya district on March 5 over fur garments. They painted themselves in leopard patterns and held up signs saying, ''Only Animals Should Wear Fur.'' KURASHIKI, Japan - A group of people from China carry banners reading: ''Resolutely opposed to Taiwan's independence'' ''You troublemaker Lee Teng-hui'' in protest over the former Taiwan president's visit to a hospital in Kurashiki on April 24 for a medical checkup.