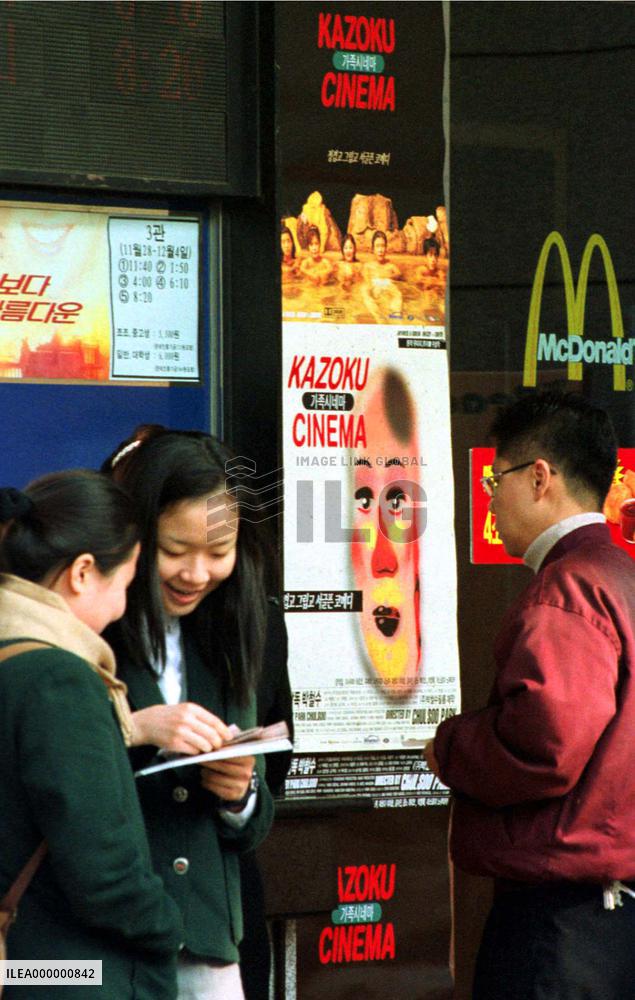 South Koreans visit a theater in Seoul to watch a movie made in South Korea, featuring Japanese dialogue and actors. The movie opened to the public on Nov. 28 at theaters in South Korea as part of President Kim Dae Jung's gradual removal of a decades-old ban on imports of Japanese culture. The film, ''Kazoku (Family) Cinema,'' was directed by South Korean director Pak Cheor Su and produced with South Korean capital. It is based on a prize-winning Japanese-language novel by Miri Yuu, a permanent Korean resident of Japan. ==Kyodo James Bond film to debut in China after passing censors

BEIJING, China - A signboard advertises the latest James Bond film, ''Casino Royale,'' in front of a Beijing movie theater on Jan. 29, with the film set to premiere in the Chinese capital the same day -- the first 007 film to pass Chinese censors and make it into mainland theaters. (Kyodo) The award-winning Japanese movie ''HANA-BI'' goes on release in South Korea on Dec. 5, marking the country's first public screening of a Japanese film -- made in Japan with Japanese capital by a Japanese director. The public viewing of Japanese movies is part of President Kim Dae Jung's gradual removal of a long-standing ban on Japanese films, music and other forms of culture. ==Kyodo