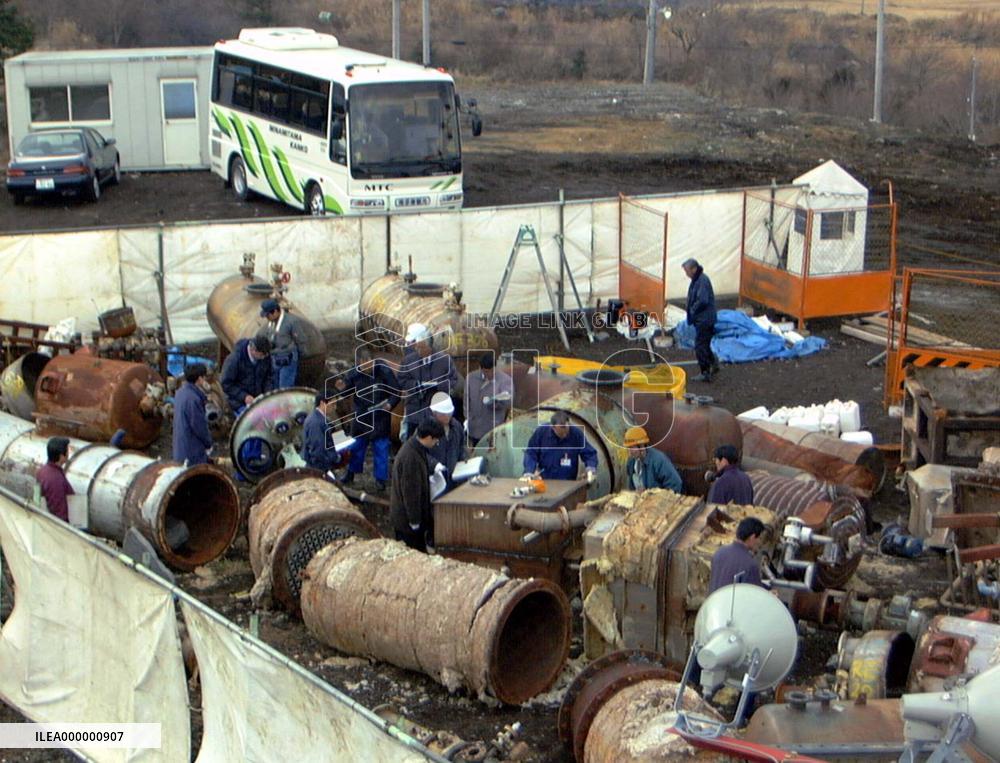 Chemical weapons experts from the Organization for the Prohibition of Chemical Weapons (OPCW) on Dec. 10 inspect the site, where the AUM Shinrikyo cult attempted to mass-produce sarin nerve gas, to verify the demolition of the facilities. TOKYO, Japan - Noboru Ueno, a senior official at Tokyo Metro Co.'s Kasumigaseki Station, lays flowers at an altar set up in the station on March 20 during a ceremony to mark the 14th anniversary of the AUM Shinrikyo cult's deadly 1995 sarin nerve gas attacks. (Kyodo) TOKYO, Japan - Shizue Takahashi, 61, whose husband was killed in the AUM Shinrikyo cult's sarin nerve gas attacks in the Tokyo subway system in 1995, talks during a press conference at a press club in the Tokyo District Court building in Tokyo on Dec. 18, after applying for benefits the government will pay victims of AUM's crimes and the victim's families as the law for the step went into force the same day. (Kyodo) Survivor of 1994 AUM gas attack in Nagano dies in coma

NAGANO, Japan - In this file photo taken on March 4, Yoshiyuki Kono takes care of his wife Sumiko, who survived an AUM Shinrikyo cult sarin gas attack in Matsumoto, Nagano Prefecture, in 1994 but was left bedridden and comatose. Sumiko Kono died on Aug. 5 of respiratory failure. She was 60. (Kyodo) TOKYO, Japan - Shizue Takahashi, the widow of one of the two subway station workers who died in the deadly 1995 sarin nerve gas attacks on the Tokyo subway system, speaks to reporters after offering flowers at Kasumigaseki Station on March 20 as Japan marked the 13th anniversary of the attacks the same day. (Kyodo) TOKYO, Japan - Shizue Takahashi, the widow of one of the two subway station workers who died in the deadly 1995 sarin nerve gas attacks on the Tokyo subway system, prays for the victims in front of a flower tribute stand at Kasumigaseki Station on March 20 as Japan marked the 13th anniversary of the attacks the same day. (Pool photo)(Kyodo) TOKYO, Japan - The Supreme Court on Feb. 15 rejects an appeal against the death sentence for former AUM Shinrikyo cult member Yasuo Hayashi (file photo), who was convicted of murder for releasing deadly sarin gas in a Tokyo subway car in 1995 and involvement in another sarin attack in Nagano Prefecture. (Kyodo) PYONGYANG, North Korea - U.S. nuclear experts head to a conference site in Pyongyang on Oct. 12 to finalize a plan with North Korean experts on ways to disable three N. Korean nuclear facilities as required by a six-party deal. (Kyodo) TOKYO, Japan - Station employees of Tokyo Metro Co. offer prayers for victims of the 1995 sarin nerve gas attack on the Tokyo subway system at Kasumigaseki Station in central Tokyo on March 20, the 12th anniversary of the attack. (Kyodo) TOKYO, Japan - The Supreme Court rejected a special appeal filed by the defense counsel for AUM Shinrikyo cult founder Shoko Asahara (in photo taken on Sept. 25, 1995) on Sept. 15, finalizing the death sentence against him over his involvement in the 1995 sarin gas attack on the Tokyo subway system and other charges. (Kyodo)