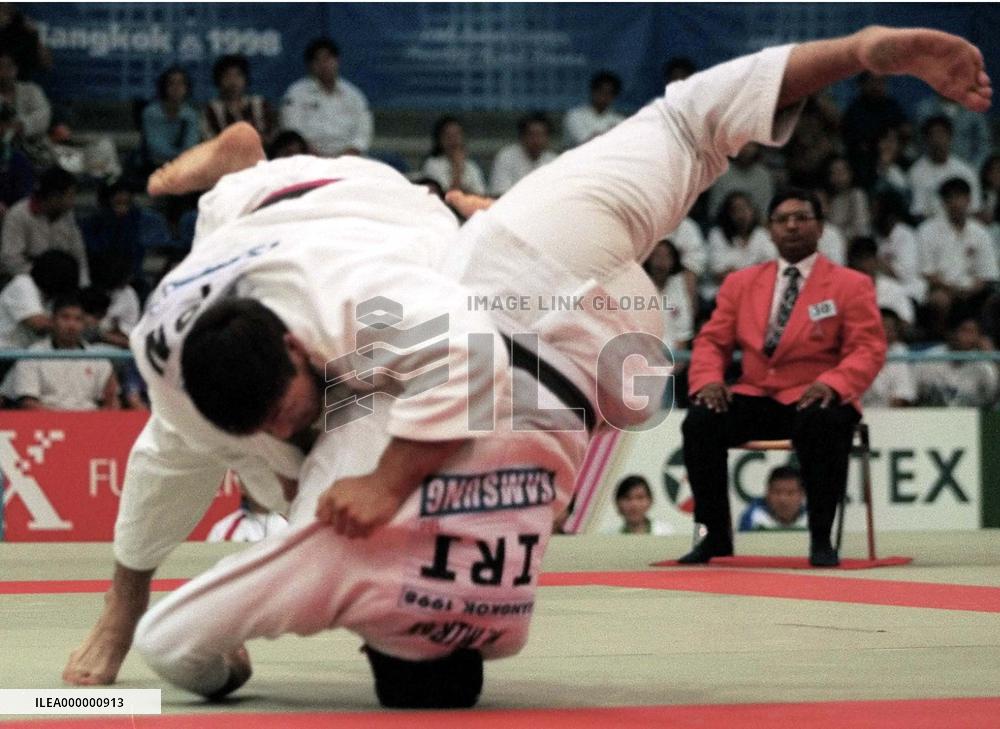 World silver medalist Shinichi Shinohara of Japan throws down Iran's Seyed Miranfashandi for an ippon victory to take gold in the men's over 100-kilogram division at Thammasat University gymnasium in Bangkok on Dec. 10. ==Kyodo

STORY: Japanese figure skating icon Hanyu announces retirement DATELINE: July 19, 2022 LENGTH: 00:02:00 LOCATION: Tokyo CATEGORY: SPORTS SHOTLIST: 1. various of the press conference STORYLINE: Japan's two-time Winter Olympic gold medalist Yuzuru Hanyu announced his decision to retire from competitive figure skating at a press conference in Tokyo on Tuesday. "Thank you all for supporting me. Because of your support, figure skater Yuzuru Hanyu can make his achievements. I will no longer compete with other skaters in competitive figure skating, but will continue to work hard as a professional figure skater," Hanyu said. He said he will continue the pursuit of the quadruple Axel, or "4A" as a professional figure skater in the future. Hanyu, also a four-time Grand Prix Final winner and six-time national champion, has dealt with a series of injuries since winning back-to-back gold medals at the Sochi and Pyeongchang Olympics. He withdrew from the world championships in March as he had not recovered from the

STORY: Gold, colored glass found on Buddhist statues in Longmen Grottoes DATELINE: June 2, 2022 LENGTH: 00:01:18 LOCATION: ZHENGZHOU, China CATEGORY: CULTURE SHOTLIST: 1. various of the Buddhist statues at the Longmen Grottoes STORYLINE: Archaeologists have found gold and silver elements and colored glass on Buddhist statues at the Longmen Grottoes, a UNESCO World Heritage site, in central China's Henan Province. The findings, among other scientific and archaeological achievements, have been made since a reinforcement and protection project of the Fengxiansi Cave of Longmen Grottoes was launched in December 2021, said the Longmen Grottoes research institute. Based on advanced technologies, archaeologists found gold and silver elements on the face of Vairocana Buddha, a giant statue that was built in the Tang Dynasty (618-907). "It suggests that skills such as gilding had probably been used in the construction of the Vairocana Buddha," said Shi Jiazhen, president of the institute. On the body surface of WHISTLER, Canada - Norway's Petter Northug (below) is congratulated by his teammate after winning the gold medal in the men's 50 kilometers mass start classic event in cross country at the Vancouver Winter Olympics at Whistler Olympic Park in Whistler, north of Vancouver, on Feb. 28, 2010. Germany's Axel Teichmann won the silver, and Sweden's Johan Olsson took the bronze. (Kyodo)