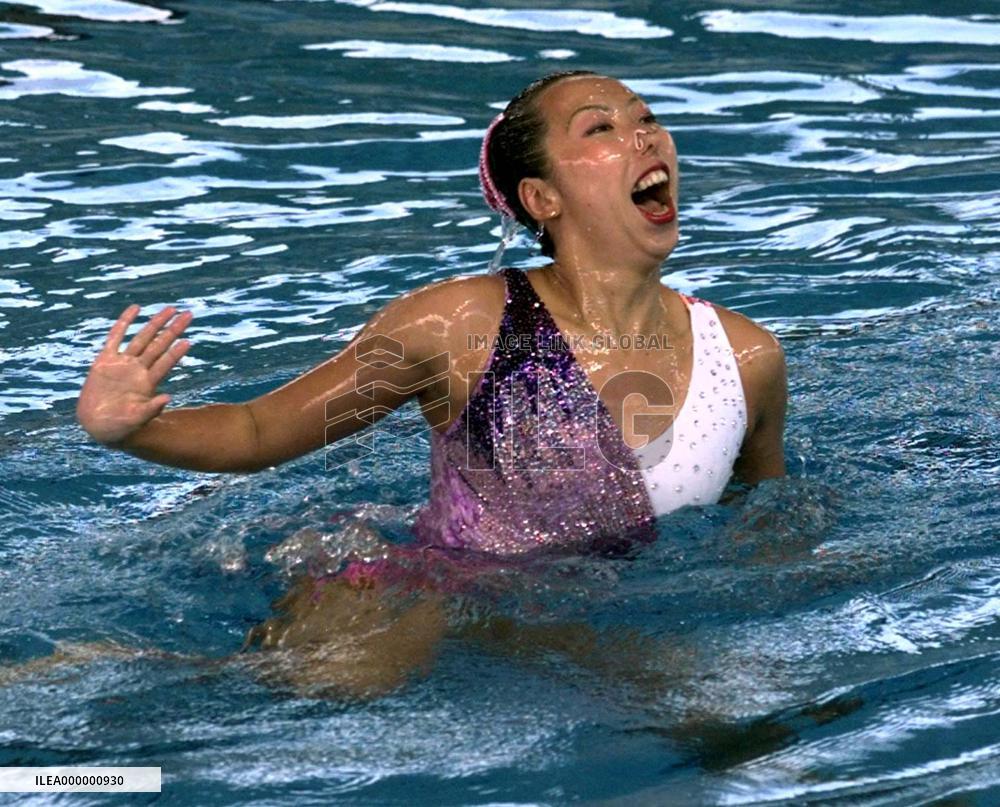 STORY: Chinese shuttlers win two titles at Indonesia Masters DATELINE: Jan. 30, 2023 LENGTH: 00:01:54 LOCATION: Jakarta CATEGORY: SPORTS SHOTLIST: 1. various of the games 2. SOUNDBITE (Chinese): ZHANG SHUXIAN, Women's doubles player STORYLINE: Chinese shuttlers collected two gold medals on Sunday at the 2023 Indonesia Masters. Women's doubles pair Liu Shengshu and Zhang Shuxian beat the Japanese duo of Yuki Fukushima and Sayaka Hirota 22-20, 21-19 in a match full of long rallies, which tested the nerves and stamina of both pairs. SOUNDBITE (Chinese): ZHANG SHUXIAN, China's Women's doubles player "The result is surprising. It's the first time for us to compete as a pair. We wanted to learn from other players through this competition. We didn't think we would win. We just tried to do our best." Zhang was formerly paired with Zheng Yu, with the duo reaching No. 4 in the world. Her current partner Liu, 18, is the reigning world junior champion in both women's and mixed doubles categories. In the mixed doub

STORY: China wins 5 individual gold medals at ITTF World Youth Championships DATELINE: Dec. 12, 2022 LENGTH: 00:01:20 LOCATION: Tunis CATEGORY: SPORTS SHOTLIST: 1. various of the U19 men's singles final 2. various of the award ceremony STORYLINE: The U19 men's singles final of the 2022 ITTF World Youth Championships was held in Tunis Sunday. Chinese player Lin Shidong defeated his teammate Chen Yuanyu 4:1 to win the championship. The competitions were divided into two groups, U19 and U15. In the 10 individual competitions in the men's singles, men's doubles, women's singles, women's doubles and mixed doubles in the two groups, China won five gold medals. In the previous team competitions, China won the men's and women's team championships in the U19 and U15 age groups. The 2022 World Youth Table Tennis Championships was held in Tunisia from Dec. 4 to 11. Xinhua News Agency correspondents reporting from Tunis. (XHTV)

Runners "race through history" at Egypt's Pyramids Half Marathon

STORY: Runners "race through history" at Egypt's Pyramids Half Marathon DATELINE: Dec. 12, 2022 LENGTH: 0:01:38 LOCATION: Cairo CATEGORY: SPORTS SHOTLIST: 1. various of the race STORYLINE: With the landmark Great Pyramids of Giza in the background, nearly 4,000 runners from dozens of countries competed on Saturday at the fourth edition of the Pyramids Half Marathon in the southwest of Cairo, capital of Egypt. Just like the event's slogan "Race Through History," participants enjoyed the opportunity to run through the historical wonders that were built more than 4,000 years ago. Comprised of the 5-km race, the 10-km race and the 21-km half marathon, the event's six gold medals for champions in men's and women's group for each distance were mostly snatched by Egyptian runners. American runner Abigail Cember, the first female finisher of the 21-km half marathon, was the only non-Egyptian gold medalist in the event. Egyptian athlete Salem Mohamed Salem, who won the half marathon's gold medal for ma

STORY: China wins 50m pistol mixed team gold at worlds DATELINE: Oct. 26, 2022 LENGTH: 0:01:03 LOCATION: Cairo CATEGORY: SPORTS SHOTLIST: 1. various of shooting competitions and awarding ceremony STORYLINE: China clinched the 50m pistol mixed team gold and bronze medals at the 2022 International Shooting Sport Federation (ISSF) World Championships in Cairo on Monday. In the 13-round gold medal match, Chinese Olympic gold medalist Jiang Ranxin and her teammate Zhang Bowen beat Mongolian pair Munkhzul Tsogbadrakh/Davaakhuu Enkhtaivan 17-9. Zhang, 26, said they were confident they could make it and win another gold for China. "Although we had a few poor shots, we could win and I am very happy about that," he added. "As long as we have strong cooperation as a team, we can win in the end," Zhang told Xinhua after the awarding ceremony, noting that the strong support of his country and team officials is behind China's outstanding performance in the ISSF World Championships. Chinese pair Li Xue/Liu Jinyao go

Exhibition on artworks of renowned Austrian painter held in Amsterdam

STORY: Exhibition on artworks of renowned Austrian painter held in Amsterdam DATELINE: Oct. 6, 2022 LENGTH: 00:01:45 LOCATION: Amsterdam CATEGORY: CULTURE SHOTLIST: 1. various of the exhibition STORYLINE: An exhibition featuring the artworks of Austrian painter Gustav Klimt will be open to the public starting from Friday at the Van Gogh Museum in Amsterdam, the Netherlands. The exhibition, entitled "Golden Boy," is co-hosted by the Van Gogh Museum and the Belvedere Museum in Vienna, Austria. Klimt (1862-1918), whose masterpieces were inspired by Van Gogh, Rodin and Matisse, is renowned for his paintings with gold and decorative ornaments, universal symbolism and depictions of strong, self-confident women. Iconic masterpieces from all over the world such as Judith (1901), Emilie Floge (1902) and Water Snake II (1904) are on display. The exhibition will run until January 2023. Xinhua News Agency correspondents reporting from Amsterdam. (XHTV)

STORY: 2,700-year-old decorated ivory plaques discovered at Jerusalem site DATELINE: Sept. 6, 2022 LENGTH: 00:03:08 LOCATION: Jerusalem CATEGORY: SOCIETY SHOTLIST: 1. various of the City of David 2. various of workers at the site 3. various of decorated ivory plaques STORYLINE: Archaeologists have discovered a rare and prestigious collection of decorated ivory plaques of about 2,700 years old, the Israel Antiquities Authority (IAA) said Monday. The ancient ivories, made of elephant tusks, were unearthed among the ruins of a palatial building by the IAA and Tel Aviv University in the City of David archaeological site in Jerusalem. It is worth noting that the ivory was considered one of the most expensive raw materials in the ancient world, even more than gold. During the excavation, the team found 1,500 ivory fragments, which were the remnants of at least 12 small square plaques, 5 cm long and 5 mm thick. The decorated ivories were apparently inlaid in wooden furnishings used by the building's residents

STORY: Japanese figure skating icon Hanyu announces retirement DATELINE: July 19, 2022 LENGTH: 00:02:00 LOCATION: Tokyo CATEGORY: SPORTS SHOTLIST: 1. various of the press conference STORYLINE: Japan's two-time Winter Olympic gold medalist Yuzuru Hanyu announced his decision to retire from competitive figure skating at a press conference in Tokyo on Tuesday. "Thank you all for supporting me. Because of your support, figure skater Yuzuru Hanyu can make his achievements. I will no longer compete with other skaters in competitive figure skating, but will continue to work hard as a professional figure skater," Hanyu said. He said he will continue the pursuit of the quadruple Axel, or "4A" as a professional figure skater in the future. Hanyu, also a four-time Grand Prix Final winner and six-time national champion, has dealt with a series of injuries since winning back-to-back gold medals at the Sochi and Pyeongchang Olympics. He withdrew from the world championships in March as he had not recovered from the

Secrets behind Hungary's success in the pool