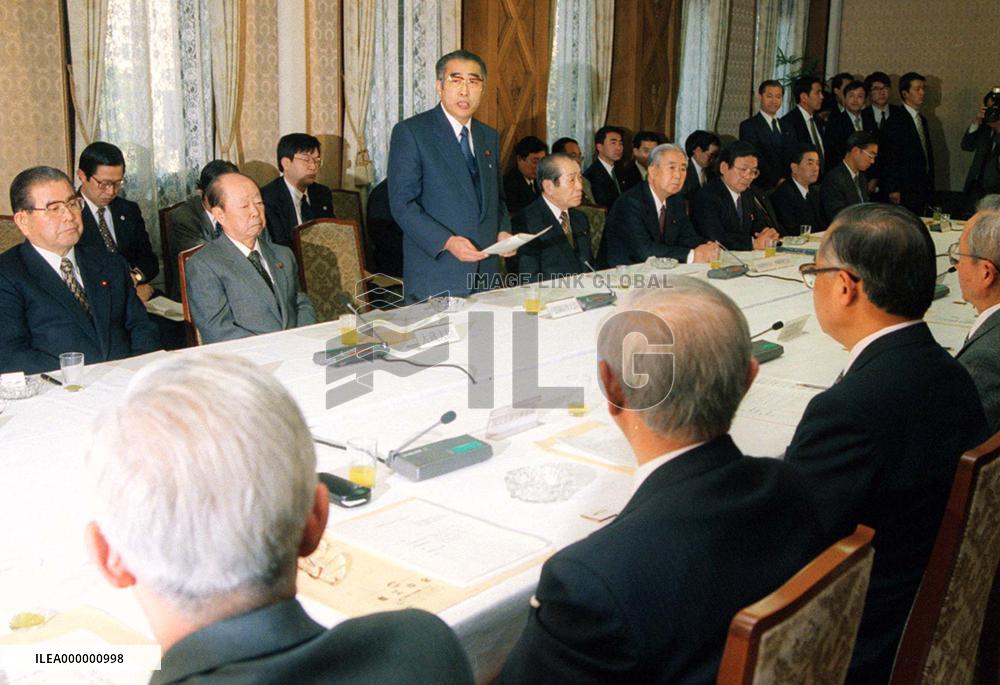 Prime Minister Keizo Obuchi (C) urged banks Dec. 28 to increase loans to small businesses in order to help them meet year-end funding requirements in a meeting with leaders of the banking world at the prime minister's official residence.

STORY: Tunisian government rolls out measures to revive tourism DATELINE: April 9, 2022 LENGTH: 00:01:18 LOCATION: Tunis CATEGORY: POLITICS/ECONOMY SHOTLIST: 1. various of tourism sites in Tunisia STORYLINE: The Tunisian government announced on Thursday a tourism recovery plan aimed at reaching 50 to 60 percent of tourist entries made in 2019 at the end of this year. Tunisian Prime Minister Najla Bouden said after a ministerial meeting "the plan also determines the main lines of the government's orientations in order to support the various players in the sector of tourism, as well as the professional structures in their efforts to overcome the effects of the health crisis linked to COVID-19". Bouden stressed the challenges that Tunisian tourism will have to face. She invited professional organizations to multiply their efforts in order to be able to adapt to the new phase of recovery of world tourism and to undertake necessary preparations which will allow a new successful tourist season. Xinhua News Ag 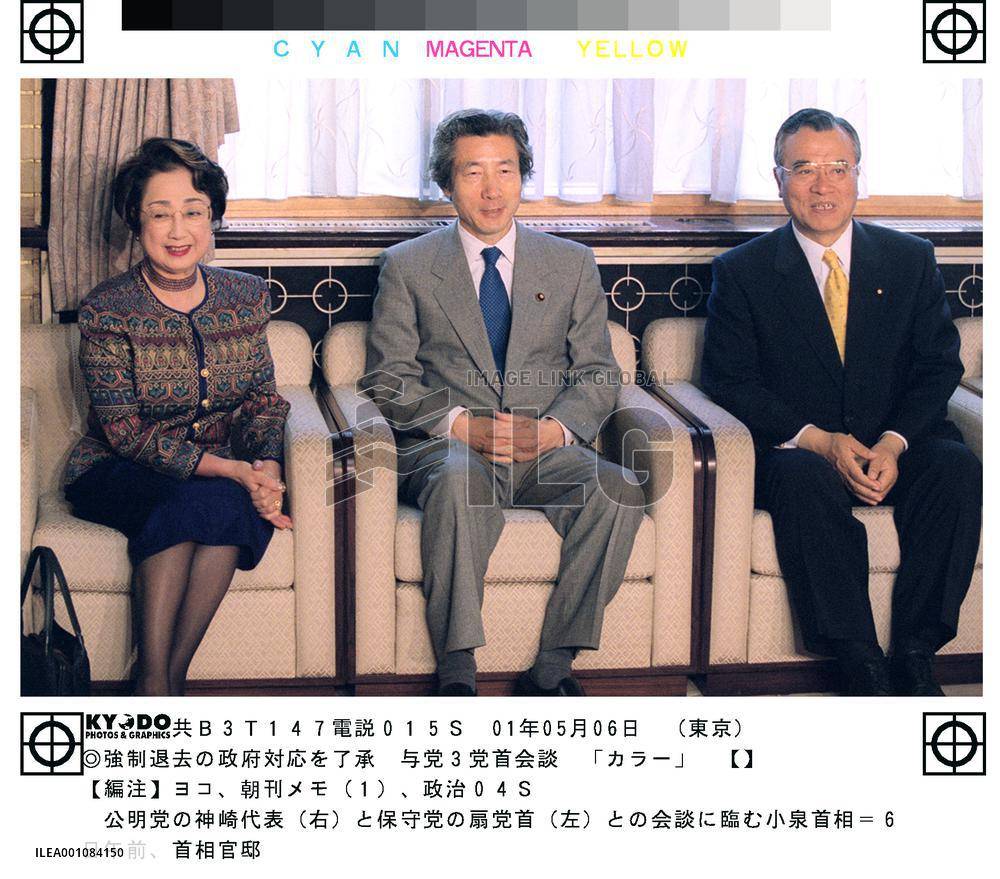 TOKYO, Japan - Prime Minister Junichiro Koizumi (C), flanked by Chikage Ogi (L), leader of the New Conservative Party, and Tekenori Kanzaki (R), leader of the New Komeito party, poses for photographers prior to their meeting at his official residence May 6. Koizumi met with the two coalition leaders to brief them on a policy speech he will deliver in the Diet on May 7. 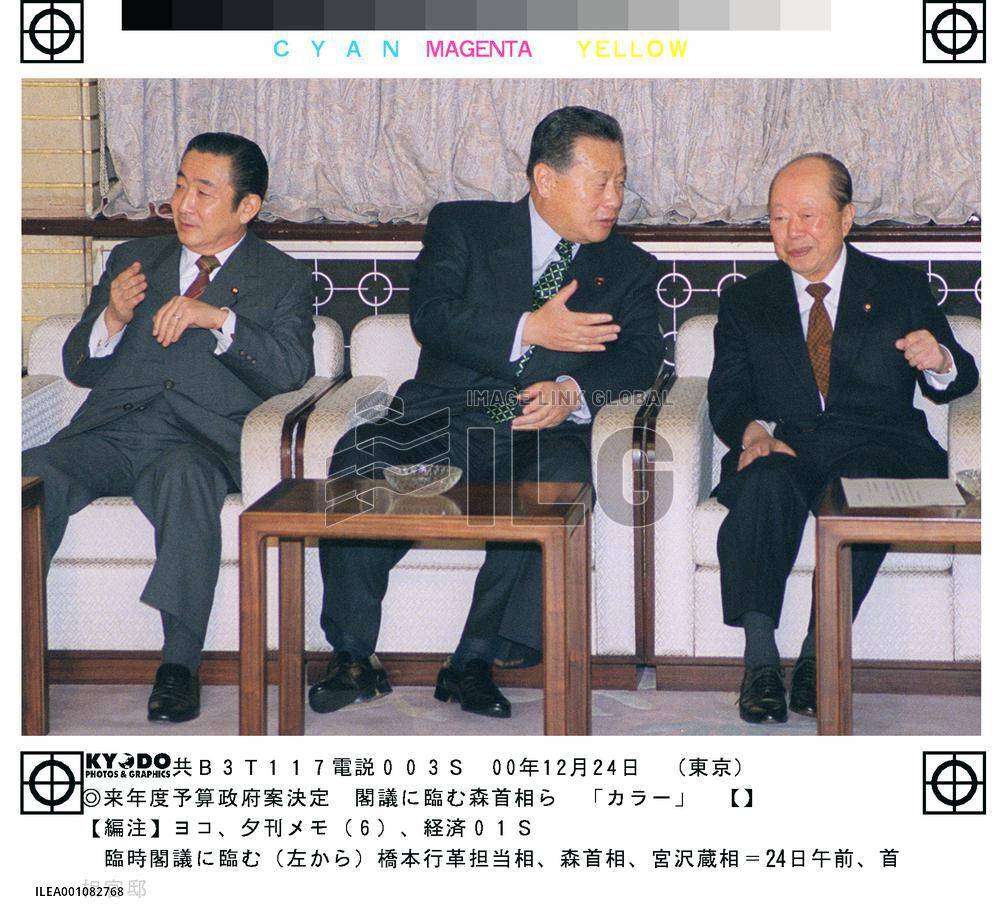 TOKYO, Japan - Prime Minister Yoshiro Mori (C) chats with Finance Minister Kiichi Miyazawa (R) at an extraordinary cabinet meeting Dec. 24. The meeting, which took place at the premier's official residence, approved an 82.65 trillion yen fiscal 2001 draft budget that includes a record-high 48,658.9 billion yen in spending on discretionary policy steps to get Japan's economy back on track amid prevailing uncertainties over its future. On the left is former prime minister Ryutaro Hashimoto, who is currently minister in charge of administrative reform. 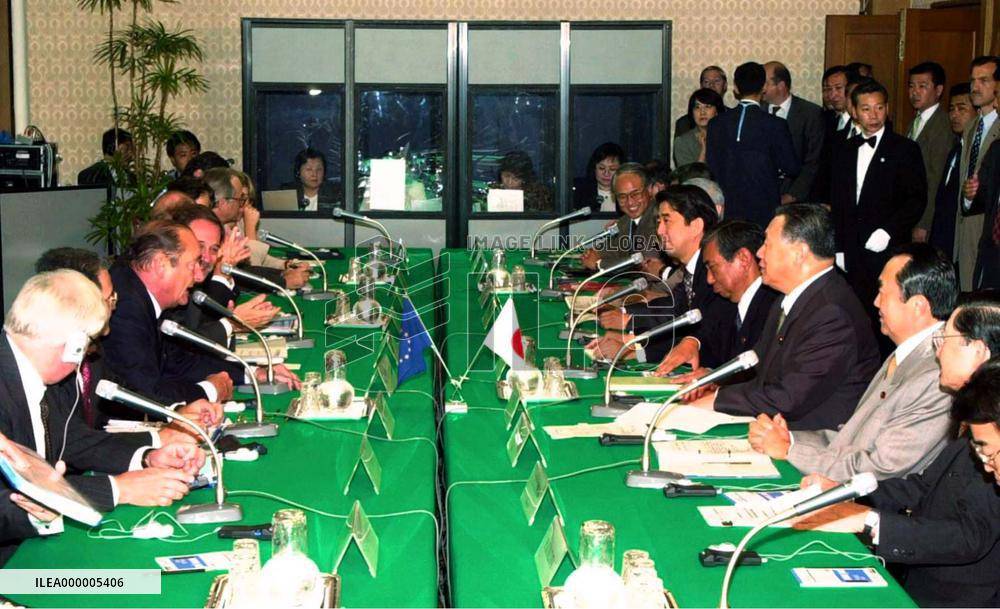 Japan, EU to seek new WTO round by year-end

TOKYO, Japan - Japan and the European Union (EU) hold regular consultations at the prime minister's official residence in Tokyo on July 19. Prime Minister Yoshiro Mori (4th from R) leads the Japanese team while the EU side is led by French President Jacques Chirac (3rd from L), who is also president of the European Council, and European Commission President Romano Prodi. They agreed to try to launch the new round of global trade negotiations under the World Trade Organization this year as part of their broader agreement to boost partnership on social, cultural, economic and political areas. TOKYO, Japan - (From L to R) French President Jacques Chirac, who is also president of the European Council, European Commission President Romano Prodi (C) and Japanese Prime Minister Yoshiro Mori meet the press at the end of the Japan-EU regular consultations at the premier's official residence in Tokyo on July 19. 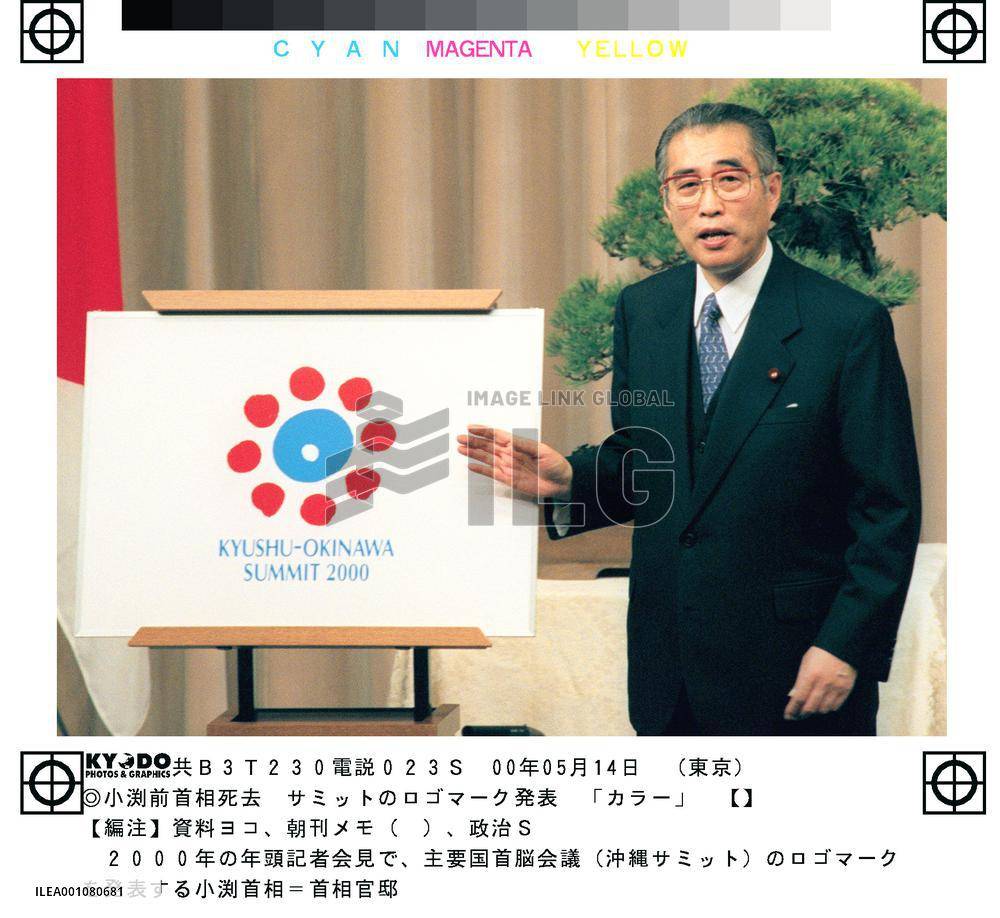 TOKYO, Japan - Former Prime Minister Keizo Obuchi, in a file photo, is shown attending this year's first press conference at his official residence. Obuchi, who died May 14, was announcing the logo for the Group of Eight summit scheduled for July 21-23 in Okinawa Prefecture. 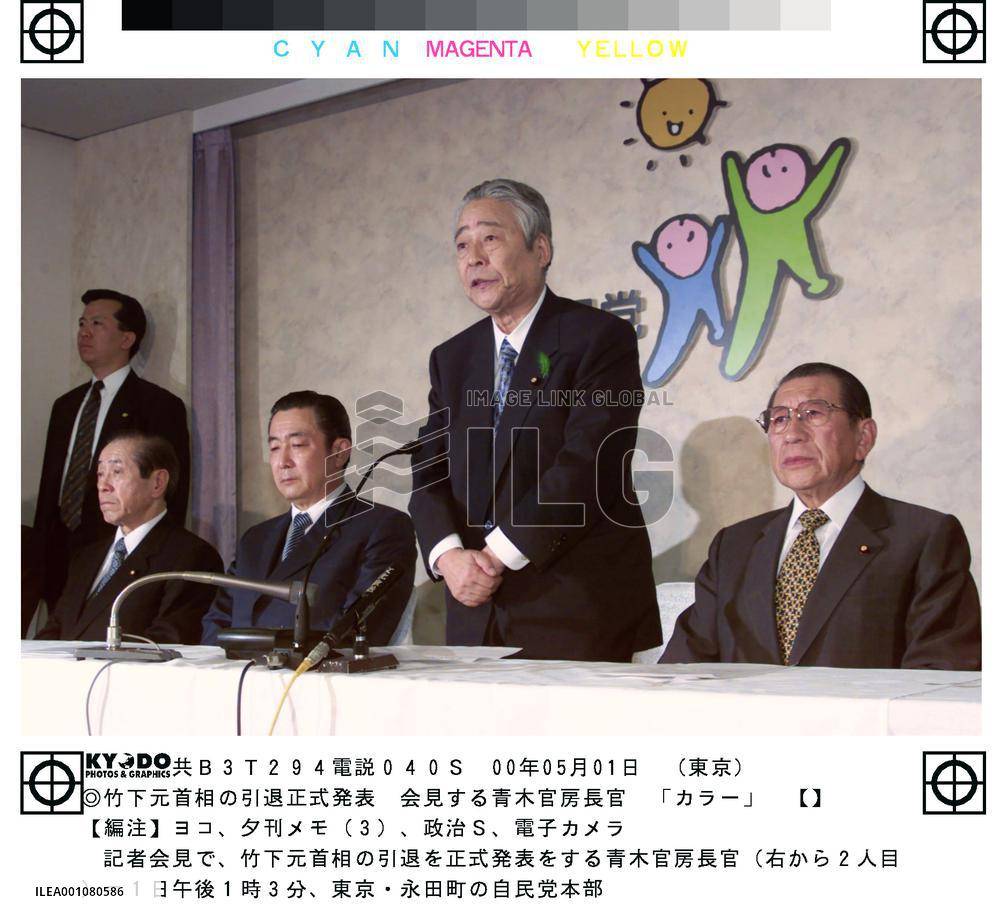 TOKYO, Japan - Former Prime Minister Noboru Takeshita will retire from politics at the end of his current term in the House of Representatives, Chief Cabinet Secretary Mikio Aoki (2nd from R) announces at Liberal Democratic Party (LDP) headquarters in Tokyo on May 1. Since April, leaders of the LDP's Obuchi faction and Takeshita have discussed whether Takeshita, one of Japan's most influential politicians, should run in the upcoming general election. Takeshita has been hospitalized for more than a year. TOKYO, Japan - New Prime Minister Yoshiro Mori (C in front) and members of his cabinet pose for photographers at the premier's official residence April 5 after holding their first meeting. Mori reappointed all ministers from the cabinet of former Prime Minister Keizo Obuchi in an effort to ensure stability and continuity in government policy and Diet affairs. TOKYO, Japan - Prime Minister Keizo Obuchi (C), president of the Liberal Democratic Party, Takenori Kanzaki, leader of the New Komeito party, (R) and Liberal Party leader Ichiro Ozawa hold talks at the premier's official residence in Tokyo on the evening of April 1. During the talks, the leaders of the three-party ruling coalition decided to put off a decision on the potential withdrawal of the LP from the alliance, coalition sources said. TOKYO, Japan - Prime Minister Keizo Obuchi (front, 2nd from L) speaks at a March 31 meeting of cabinet ministers at the premier's official residence to discuss ways to cope with the eruption of the Mt. Usu volcano in southwestern Hokkaido. The 732-meter mountain erupted earlier in the day for the first time in 23 years.