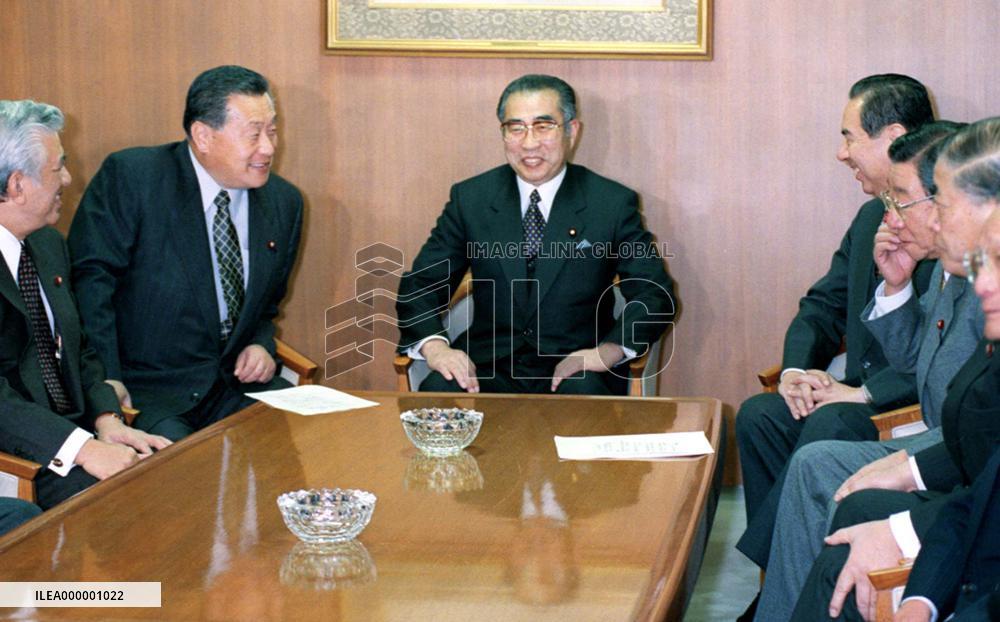 Prime Minister Keizo Obuchi (C) meets senior officials of his ruling Liberal Democratic Party (LDP) hours before his departure Jan. 6 for an eight-day European tour. He urged them to try to reach a coalition agreement with their counterparts from the Liberal Party (LP) as soon as possible. TOKYO, Japan - A group of visitors stroll through the inner gardens of the Imperial Palace in Tokyo in a guided tour for the elderly people on Sept. 13. The Imperial Household Agency opens the 25-hectare Fukiage gardens twice a year, once in May mainly for children and once around Respect for the Aged Day for people aged over 70. Ninety people visited the gardens on Sept. 13. They were chosen by lottery from among 1,900 applicants, according to palace officials. (Pool photo by Kyodo News) (Kyodo) SEOUL, South Korea - Hwang Joon Kuk, chief of the South Korean foreign ministry's bureau on the North Korean nuclear issue, speaks at a press conference in Seoul on June 12. Hwang chaired a one-day meeting of working-level officials from the countries involved in the six-party talks on ending North Korea's nuclear programs held at the truce village of Panmunjeom on June 11. (Kyodo) HONG KONG, China - Lodi Gyari, one of the two envoys from the Tibet government in exile, talks to reporters at Hong Kong international airport on May 6 en route to Dharamsala, India, after wrapping up a one-day meeting with Beijing officials over the weekend in south China. Tibet's government-in-exile is based in Dharamsala in northern India. (Kyodo) TOKYO, Japan - Chinese government officials (seated on the right side) hold talks with their Japanese counterparts (left) at the Cabinet Office in Tokyo on Feb. 3 over a food-poisoning outbreak allegedly triggered by Chinese-made frozen meat dumplings. (Kyodo) SHENYANG, China - Chinese, North Korean and South Korean officials begin a two-day meeting in the northeastern Chinese city of Shenyang on Nov. 10 to discuss details of energy aid to be given to Pyongyang in exchange for denuclearization steps. (Kyodo) SHENYANG, China - North Korean delegates are seated at a two-day meeting with their Chinese and South Korean counterparts held at a Shenyang hotel to discuss details of energy aid to be given to Pyongyang in exchange for denuclearization steps. (Kyodo) PYONGYANG, North Korea - Sung Kim (2nd from R), director of the U.S. State Department's Office of Korea Affairs, talks with a North Korean official at a hotel in Pyongyang on Oct. 11. Earlier in the day, a team of U.S. government officials led by Kim arrived in Pyongyang with the aim of finalizing a plan to specify ways to disable North Korea's key nuclear facilities under a six-party denuclearization agreement. (Kyodo)