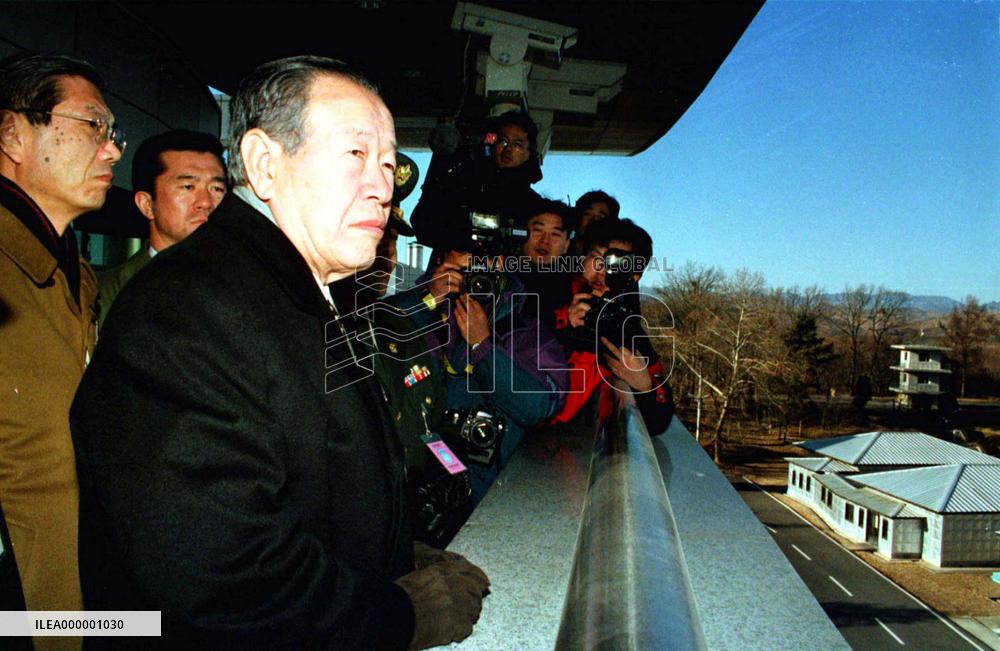 Hosei Norota, director general of the Japanese Defense Agency, visits the truce village of Panmunjom on the Korean military border in the afternoon of Jan. 7. The photo shows Norota inspecting the military border zone at the House of Freedom in Panmunjom. The Japanese defense chief arrived in Seoul on Jan. 6 for a three-day visit. ==Kyodo TOKYO, Japan - U.S. Ambassador to Japan Thomas Schieffer (R) is in talks with Japanese Defense Agency Director General Fumio Kyuma at the agency on Oct. 20. The ambassador expressed confidence later that Japan will play a ''substantial role'' in implementing the provisions of a U.N. Security Council resolution calling for sanctions against North Korea over its nuclear test. (Kyodo) SEOUL, South Korea - Military officials from North (L) and South Korea shake hands at the border truce village of Panmunjom on Sept. 14 as the two countries began talks on reconnecting railway links across the border of the divided Korean Peninsula. (Kyodo) SEOUL, South Korea - Lee Sung Hun, a North Korean soldier, is seen in this pool photo being welcomed by his colleges at the truce village of Panmunjom on Aug. 7 while being repatriated to the North Korean side by the U.S.-led United Nations Command. Lee was found adrift in a river near the demilitarized zone between the two Koreas and rescued by South Korean patrol guards on Aug. 4. OTSU, Japan - Hidetoshi Yamashita (C) lifts two bouquets into the air Oct. 22 after winning a House of Councillors by-election in Shiga Prefecture by running on the Liberal Democratic Party (LDP) ticket. At right is his wife Mieko. Yamashita, a 47-year-old former banker and the son of late Defense Agency chief Ganri Yamashita, beat Shunyu Norikumo, a former professor at Ryukoku University in Kyoto who ran on the Democratic Party of Japan ticket. He also vanquished Takashi Kawauchi, a member of the Japanese Communist Party. Yamashita will fill a seat vacated by Tenzo Okumura, who resigned before an unsuccessful attempt to win a lower house seat as an independent in the June 25 general elections. TOKYO, Japan - Eizaburo Saito, a former Diet member and chief of the Science and Technology Agency, died of kidney failure July 9 at a hospital in Kawasaki, Kanagawa Prefecture, his family said July 10. He was 87. Saito served as the agency's director general from August 1989 to February 1990 in then Prime Minister Toshiki Kaifu's cabinet. He was elected to the upper house three times. Prime Minister Keizo Obuchi (C) and other cabinet members, including Defense Agency Director General Hosei Norota (R), head to a cabinet meeting March 24 to discuss the intrusion into Japanese territorial waters of two unidentified ships in the Sea of Japan. Japan's Defense Agency Director-General Hosei Norota (C), presides over an inaugural session of the agency's intelligence council on Jan. 21 to discuss the North Korean situation. The council was established following North Korea's launch of a rocket on Aug. 31 last year, parts of which flew over Japan and plunged into the Pacific.