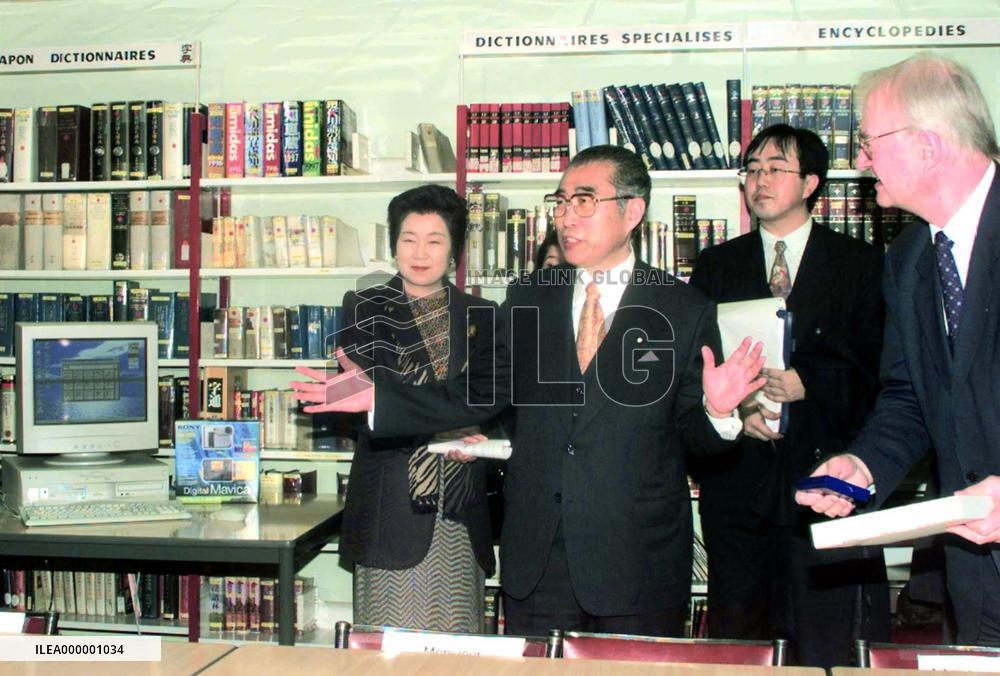 Japanese Prime Minister Keizo Obuchi (2nd from L) and his wife Chizuko visit a Paris school of Oriental languages in the afternoon of Jan. 7. He presented personal computers to the school. The couple arrived in Paris at night Jan. 6 on the first leg of their eight-day trip to three European countries. ==Kyodo

STORY: Swahili Fashion Week in Tanzania promotes talented designers DATELINE: Dec. 4, 2022 LENGTH: 0:04:27 LOCATION: DAR ES SALAAM, Tanzania CATEGORY: CULTURE SHOTLIST: 1. various of Swahili Fashion Week 2. SOUNDBITE (English): MBOKO USWEGE, Fashion designer STORYLINE: Swahili Fashion Week, an annual fashion event in Africa, kicked off in Tanzania's Dar es Salaam on Friday night, attracting over 50 fashion designers, mostly from Swahili-speaking countries and beyond to showcase their creations. The fashion and accessory designers showcased their talent and creativity to their clientele and the international fashion industry. "Swahili Fashion Week is a huge platform for models like me. I am grateful that tonight I have been presented with an award," said Rio after receiving a prestigious award at the launch of the three-day 15th edition of the Swahili Fashion Week and Awards 2022. Rio was among winners in 29 fashion categories that were voted by the public and audited by an audit firm. "My journey to the

STORY: Malta expects closer cooperation with China DATELINE: Sept 29, 2022 LENGTH: 0:02:04 LOCATION: Valletta CATEGORY: POLITICS SHOTLIST: 1. SOUNDBITE 1 (English): GEORGE VELLA, Maltese President 2. SOUNDBITE 2 (English): IAN BORG, Maltese Foreign Minister 3. various of exchange activities (file) 4. various of Valletta streets STORYLINE: Maltese President George Vella and Foreign Minister Ian Borg have congratulated China on the occasion of China's National Day, expecting closer cooperation with China. SOUNDBITE 1 (English): GEORGE VELLA, Maltese President "I congratulate the people of China on the occasion of their National Day. I also take this opportunity to recall that this year Malta and China commemorate the 50th Anniversary since the establishment of diplomatic relations. Over these five decades our countries have built a strong relationship based on a very strong juridical framework and on reciprocal respect. When one looks at the number and frequency of high-level visits and agreements reached (220925) -- XI'AN, Sept. 25, 2022 (Xinhua) -- Chen Jiayue (2nd L), a hearing-impaired barista, communicates with family members of other hearing-impaired people at her own cafe in Xi'an, capital of northwest China's Shaanxi Province, Sept. 24, 2022. The International Day of the Deaf falls on the fourth Sunday each September. Since 2019, Shaanxi Urban Economy School has been providing free barista training for the hearing-impaired. Trainees can learn coffee-making skills as well as cafe operation knowledge during the training programme, which could help them in paving the way either to start their coffee business or get employed in this industry. So far, more than 20 people who have graduated from the training programme are working at cafes in various places across China. (Xinhua/Zheng Xin) A visit to night market in Dai-style ancient town in Yunnan, China

STORY: A visit to night market in Dai-style ancient town in Yunnan, China DATELINE: Sept. 17, 2022 LENGTH: 00:01:57 LOCATION: MANGSHI, China CATEGORY: ECONOMY SHOTLIST: 1. various of the ancient town STORYLINE: Late into the night, the night market in an ancient town in the city of Mangshi under Dehong Dai and Jingpo Autonomous Prefecture, southwest China's Yunnan Province, is bustling with activity. Residents in Mangshi are mainly of Dai and Jingpo ethnic groups. The food and dance performances in the Dai-style town attract local residents and tourists. Official data show that the town attracts 1,500 to 2,000 visits every day on working days and about 5,000 visits every day during the weekends. Xinhua News Agency correspondents reporting from Mangshi, China. (XHTV)

STORY: Thailand attracts visitors with shadow puppet festival DATELINE: Sept. 11, 2022 LENGTH: 0:03:02 LOCATION: Bangkok CATEGORY: SOCIETY SHOTLIST: 1. various of shadow puppet festival STORYLINE: Hundreds of performers and visitors gathered Saturday night at a shadow puppet show in central Thailand, although it was intermittent due to heavy rain. The three-day event, which runs until Sunday, is aimed at showcasing the traditional shadow puppetry art through a series of activities, exhibitions, and seminars, while promoting Phetchaburi province as a tourist destination. The grand opening was held Saturday evening at King Mongkut Memorial Park with a parade, shadow puppetry exhibitions and different sorts of shadow puppet performances. Artists from Thailand, Malaysia, India and other countries and regions brought their unique puppet shows to the event. A traditional Thai shadow play form, named Nang Yai, was popular among viewers. Unlike other shadow puppet forms, performers of Nang Yai

STORY: Smiling Children Project funded by China launched in Kathmandu DATELINE: July 12, 2022 LENGTH: 0:01:56 LOCATION: Kathmandu CATEGORY: EDUCATION SHOTLIST: 1 various of the ceremony STORYLINE: Nepal Smiling Children Project funded by the Global Development and South-South Cooperation Fund of China was launched in the Nepali capital of Kathmandu on Monday. Liu Jianchao, head of the International Department of the Communist Party of China (CPC) Central Committee who is on a four-day visit to Nepal, attended the launch ceremony held at a public high school along with Nepal's Minister for Energy, Water Resources and Irrigation Pampha Bhusal and ward chiefs. Addressing the ceremony, Liu noted that the project is among the first carried out by the Global Development and South-South Cooperation Fund around the world and China has been encouraging and supporting non-governmental organizations from both countries in enhancing exchanges and cooperation to bring out tangible benefits to the two peoples.

24 hours in Shache in China's Xinjiang

STORY: 24 hours in Shache in China's Xinjiang DATELINE: June 7, 2022 LENGTH: 00:02:54 LOCATION: GUANGZHOU, China CATEGORY: SOCIETY SHOTLIST: 1. various of a daily life of people in Shache County of Xinjiang STORYLINE: With the first ray of sunshine in the morning, people in Shache County in China's Xinjiang often start their day with a hearty breakfast. Finding one of their favorite breakfast pairings often comes as a delight. Those who are free may also go to a teahouse for a cup of tea. After breakfast, the streets gradually become busy. People start their daily work. And the town is regaining its vitality. It is usually in the afternoon, while taking a stroll on the streets, that you may discover a more intriguing part of the town. At dusk, residents hurried the pace of returning home.    Chewy noodles, sweet vegetables and juicy meat, many reward themselves with a tasty dinner. And after dinner, kids love to play outside. Shache doesn't reveal its full charm until night falls.    The night mark