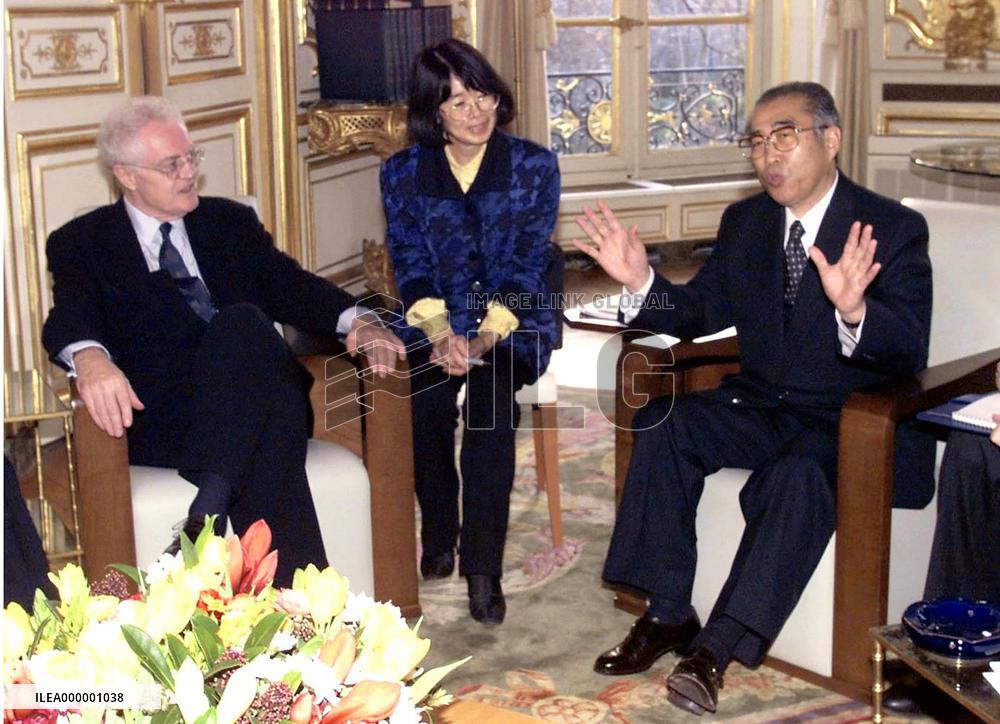 French Prime Minister Lionel Jospin (L) and Japanese Prime Minister Keizo Obuchi hold a meeting at the premier's office in Paris on Jan. 8. They agreed to mutually issue one-year working-holiday visas for people between the ages of 18 and 30. ==Kyodo TOKYO, Japan - Yutaka Shigenobu, executive producer of the Japan International Contents Festival, talks about this year's highlights of the month-long event starting this week at an office of the Visual Industry Promotion Organization in Tokyo on Sept. 18, 2009. (Kyodo) TOKYO, Japan - The government convened a meeting of senior government officials to tackle the spread of the new strain of influenza A virus on May 16 at the prime minister's office after the first domestic infection of the new strain was detected the same day in a 17-year-old male high school student with no record of overseas travel in Kobe, Hyogo Prefecture. (Kyodo) TOKYO, Japan - A man visits a job-placement office in Tokyo's Sumida Ward on Dec. 29 amid the deteriorating employment situation. While most other government offices have closed for the New Year holidays, job centers remain open and people have been visiting them nationwide. (Kyodo) TOKYO, Japan - Prime Minister Yasuo Fukuda (C) shakes hands with New Komeito party chief Akihiro Ota ahead of their meeting at the prime minister's office Aug. 1. Ota said after the meeting the premier sought New Komeito's cooperation in the reshuffling of his Cabinet later in the day. New Komeito is the junior coalition partner of Fukuda's Liberal Democratic Party. (Kyodo)

209,487 people in China investigated for corruption in 5 years

BEIJING, China - Jia Chunwang, prosecutor general of China's Supreme People's Procuratorate, addresses the National People's Congress in Beijing on March 10, noting that 209,487 people had been investigated for corruption and abuse of office in five years to 2007. While the number was down 9.9 percent compared with the five-year period to 2002, the number of those found guilty rose 30.7 percent to 116,627, according to a report Jia presented to parliament. (Kyodo)

Panel to urge Japan, China to work together on environment

BEIJING, China - The seventh meeting of the New Japan-China Friendship 21st Century Committee ended two days of talks in Beijing on Jan. 28 aimed at compiling a list of recommendations for the two governments on ways to enhance ties. Yotaro Kobayashi (L), chief corporate adviser at Fuji Xerox Co., who headed the Japanese delegation, and Zheng Bijian (R), chair of the China Reform Forum, a nongovernmental academic group, met the press after the meeting. The committee will hold its last meeting to complete the list in Japan at the end of this year. (Kyodo) TOKYO, Japan - Former Health, Labor and Welfare Minister Jiro Kawasaki, leader of a ruling coalition project team, talks to reporters in Tokyo on Dec. 27 after a meeting with lawyers representing people infected with hepatitis C via tainted blood products aimed at working out a bill to offer them blanket government relief. The talks focused on how the bill will mention the state's responsibility for the suffering of the hepatitis patients, participants said. (Kyodo)