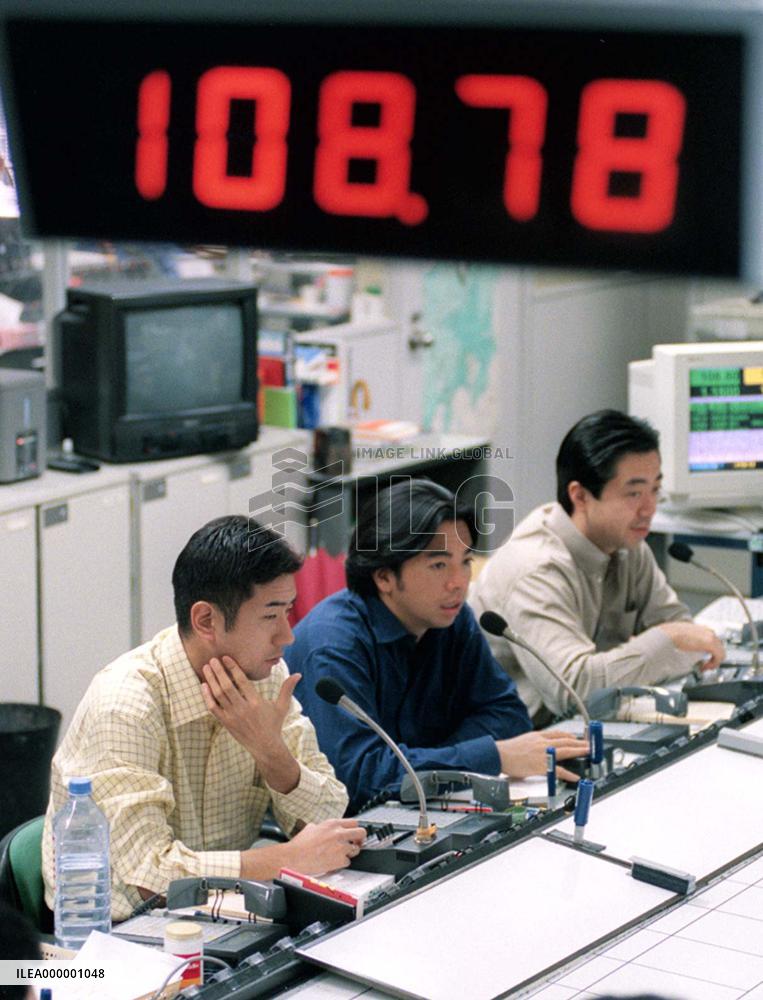 The dollar temporarily plunges below 109 yen in early trading in Tokyo on Jan. 12, following a 28-month low of 108.21 yen in New York overnight. The display at Tokyo Forex Co., a Tokyo-based foreign exchange brokerage, showed the U.S. currency momentarily marking 108.78 yen. However, the U.S. dollar bounced back sharply on short-covering, topping 111.42 yen at 11 a.m. ==Kyodo TOKYO, Japan - Akina Minami, a pop idol in Japan, promotes the release of a memorial model of the popular U.S. dress-up doll Barbie in an event in Tokyo on March 9 to commemorate the 50th anniversary of Barbie's debut in New York 50 years ago to the day. Minami took part in the event donning a black-and-white-striped dress inspired by early Barbie models. (Kyodo) TOKYO, Japan - Jonathan Schell, a journalist and nuclear arms analyst in New York, talks about the U.S. atomic bombings of Hiroshima and Nagasaki and their implications for the future on July 7. (Kyodo) NEW YORK, United States - Jazz great Toshiko Akiyoshi (2nd L, front row) joins other acclaimed musicians and jazz contributors to be awarded the 2007 National Endowment for the Arts' Jazz Master award in New York on Jan. 12. Akiyoshi, 77, dressed in a shimmering black dress adorned with flowers, told the packed audience at the Hilton New York Hotel that she was ''extremely honored to receive this highest award a jazz musician can possibly have.'' (Kyodo) BEIJING, China - U.S. Sen. Charles Schumer (L), a New York Democrat, and Sen. Lindsey Graham (R), a South Carolina Republican, who co-authored a bill that threatens China with punishment over its currency regime, speak to reporters at the U.S. Embassy in Beijing on March 23. They said after a fact-finding trip to Beijing they were unhappy that more decisive action has not been taken over the yuan. (Kyodo) NEW YORK, United States - Erin Crowe smiles at a reception in New York on Jan. 26 showcasing her portraits of U.S. Federal Reserve Board Chairman Alan Greenspan that capture the many expressions of the infamous American who spent 18 years running the economy. Greenspan is due to leave his office on Jan. 31. Although only a young girl when Greenspan took over as the Fed chair, the 25-year-old Erin, who studies for her master's at Goldsmiths College in England, has been focusing on him as a subject since entering six paintings at an art festival centering around the theme of the dollar sign. (Kyodo) TAIPEI, Taiwan - File photo shows Taiwan President Chen Shui-bian, who the United States will allow to meet U.S. lawmakers during his planned stopover in New York on his way to Central America later this month. On May 12, Taiwan's Central News Agency reported that a U.S. State Department official also said Chen will be allowed to spend two nights in New York on the stopover. Republican Senator Jesse Helms and House Majority Whip Tom DeLay reportedly plan to meet with Chen during his U.S. stopover. Chen will take a two-week tour of five diplomatic allies in Central America from May 21. German retailer Metro to open outlet in Japan with Marubeni

TOKYO, Japan - Hans-Joachim Koerber (R), chairman of Germany's Metro AG, the world's No. 3 retailer, meets the press in Tokyo on April 13. Koerber said his company and Japanese trading house Marubeni Corp. have agreed to set up a joint venture and open a Metro outlet in the Tokyo area next summer. Metro, with annual sales worth the equivalent of 5 trillion yen, is in the same retail league as U.S.-based Wal-Mart Stores Inc. and France's Carrefour SA. TOKYO, Japan - Passersby watch a stock price board outside a brokerage house in Ginza, Tokyo, on March 14. The benchmark Nikkei Stock Average gained a bit of ground in thin trading in the wake of a sharp rebound in U.S. technology stocks, but the broad-based TOPIX extended its losing streak on a tumble in the banking sector. TOKYO, Japan - Share prices on the Tokyo Stock Exchange move sharply lower on the morning of March 12 on a tumble in U.S. technology stocks March 9. The signboard of a brokerage firm in Tokyo's Nihombashi district shows the Nikkei Stock Average plunging 378.45 points to end the morning at 12,249.45.