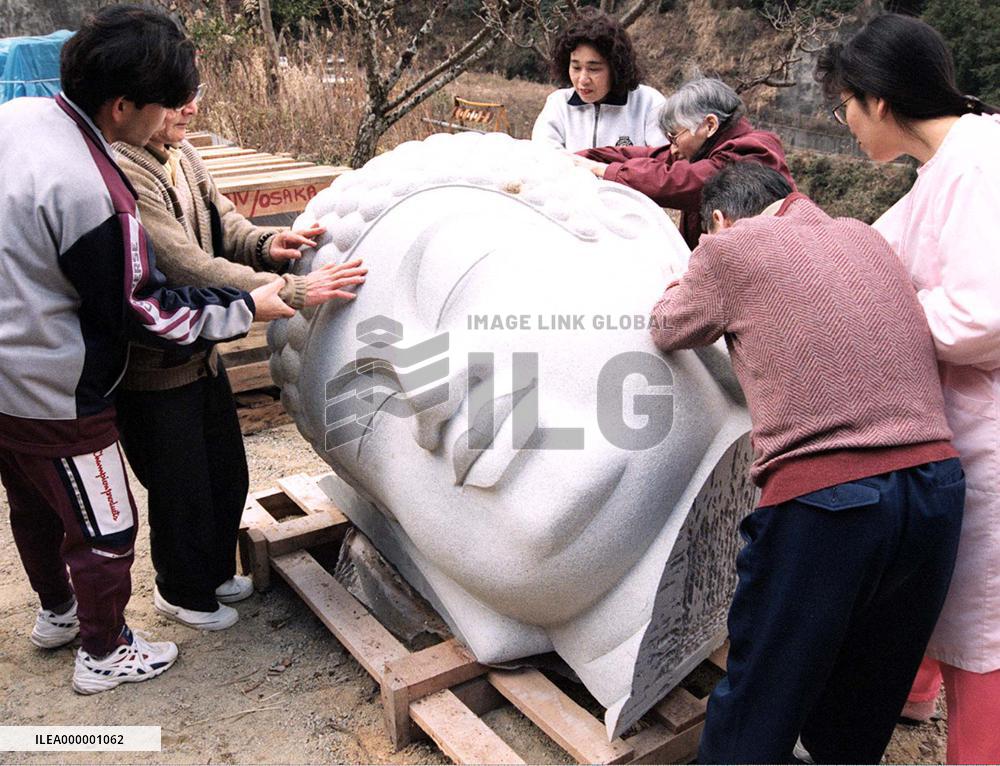 Workers at the Tsubosaka Temple in Nara Prefecture, western Japan, uncover the head of a large Buddha stone statue that arrived from India on Jan. 13. The 1.5-meter-tall head is one of 26 pieces of a statue of the lying Buddha, which is also known as the ''nirvana'' Buddha. Measuring 8 meters long and 30 tons in weight, the statue is the largest of its kind in Japan. Moai statue on show in Tokyo to mark Japan-Chile friendship

TOKYO, Japan - A Moai statue brought from Chile's Easter Island on exhibition at Tokyo's Marunouchi Building on Sept. 4 to mark the 110th anniversary of the friendship, commerce and navigation treaty between Japan and Chile. This is the first time in 25 years that a Moai statue, rarely taken outside the island, has been brought to Japan, according to the Chilean Embassy in Tokyo. The Moai, 3 meters high and 6 tons in weight, will be shown on the lobby of Marunouchi Building through Sept. 17. (Kyodo) KOBE, Japan - Photo of the collapsed crane at a Kawasaki Shipbuilding Corp. factory in Kobe. The crane, about 50-meters high and weighing some 800 tons, collapsed at around 9:45 a.m. on Aug. 25 while being repaired. Three workers were killed in the incident and at least four others were injured. (Kyodo)

HINO, Japan - A predawn explosion at Toyo Aluminum K.K. in Hino, Shiga Prefecture, badly damaged its 450-square-meter factory and sparked a fire. The head of factory operations speculated that aluminum powder inside a pipe may have generated static electricity and triggered the explosion. (Kyodo) BAMYAN, Afghanistan - This photo taken March 26 shows the erasure of one of the two giant Buddha statues that were completely destroyed March 14 by Afghanistan's ruling Taliban milita. A group of international journalists flew to Bamyan on March 26 on a chartered Afghan Ariana airliner to see the site. The two Bamyan Buddha statues, which stood 53 meters and 38 meters tall, were erected before the region came under the influence of Islam. Prior to its destruction, the 53-meter statue was the world's tallest Buddha. NAGASAKI, Japan - Workers separate the head of the Statue of Peace in Nagasaki's Peace Park on Nov. 16 during repair work that started early this month. The whole of the 44-year-old, 9.7-meter-high bronze statue will be repaired by February next year. HIROSHIMA, Japan - Part of a stone tower dedicated to Korean victims of the 1945 U.S. atomic bombing of Hiroshima is found splashed with florescent paint on Oct. 17. Passersby strolling along the city's Peace Memorial Park in Naka Ward found the head of the turtle-shaped base of the 5-meter-high, 10-ton tower vandalized with bright orange paint. Japan's largest stone image of Buddha in nirvana is dedicated April 11 at the Tsubosaka Temple in Takatori, Nara Prefecture. The image, which measures 8 meters in length and weighs 30 tons, was carved by a group of Japanese and Indian sculptors in the southern Indian state of Karnataka over a two-year period and shipped to Japan in 26 pieces in January. ==Kyodo