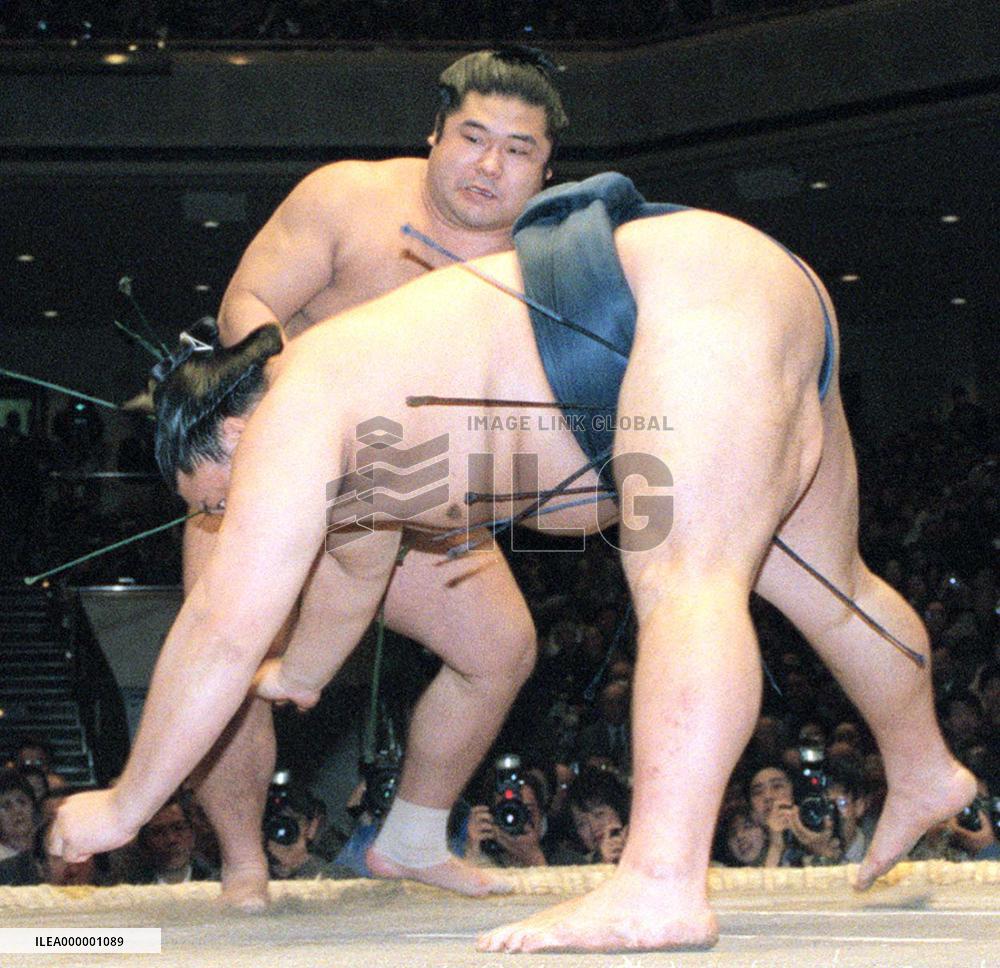 No. 5 maegashira Kotoryu (back) stuns yokozuna Takanohana Wakanohana (this side) Jan. 19 immediately after the face-off when he sidestepped the charging grand champion and slapped him down to his fourth defeat of the tourney after the 10th day of the New Year Grand Sumo tournament. Takanohana now stands with a record of 6-4, virtually out of contention for the Emperor's Cup. ==Kyodo 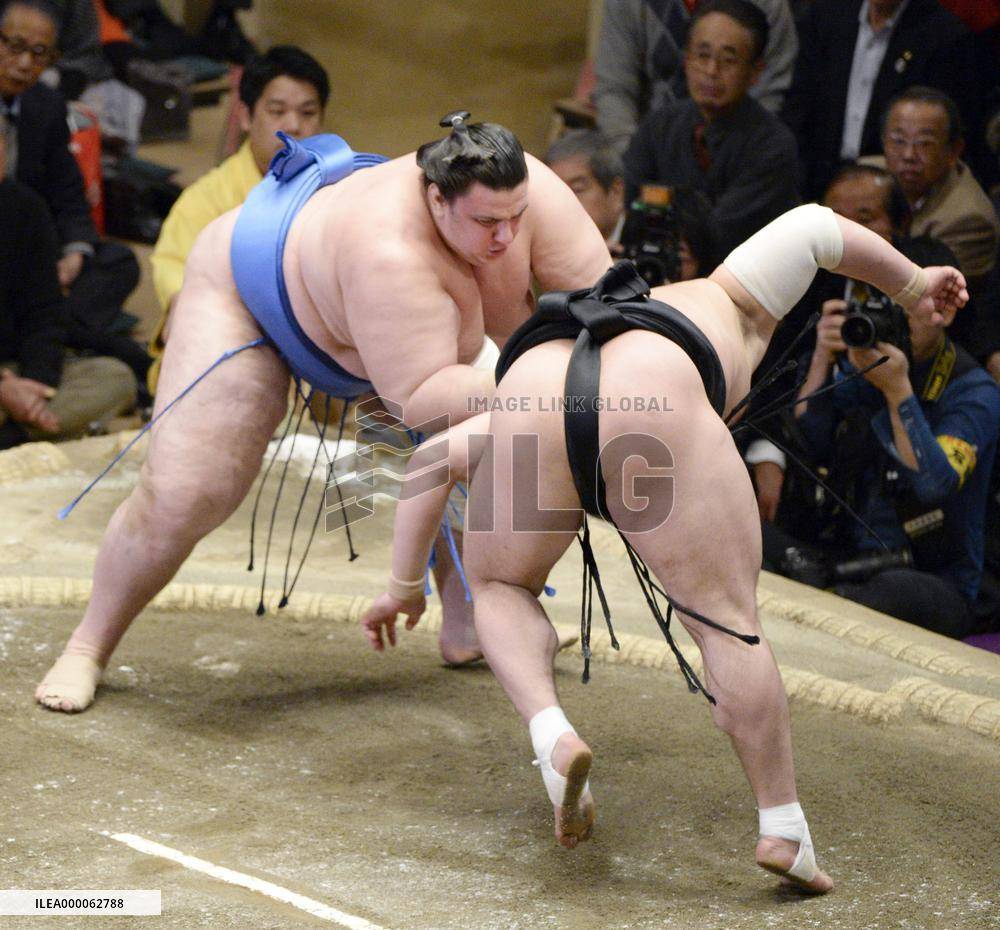 HIGASHI-HIROSHIMA, Japan - Hidenao Nakagawa, a former secretary general of the Liberal Democratic Party, speaks to supporters in Higashi-Hiroshima on Aug. 31 about his defeat in the No. 4 single-seat constituency of Hiroshima Prefecture in the House of Representatives election the previous day. But Nakagawa regained a lower house seat in the proportional representation block. (Kyodo) 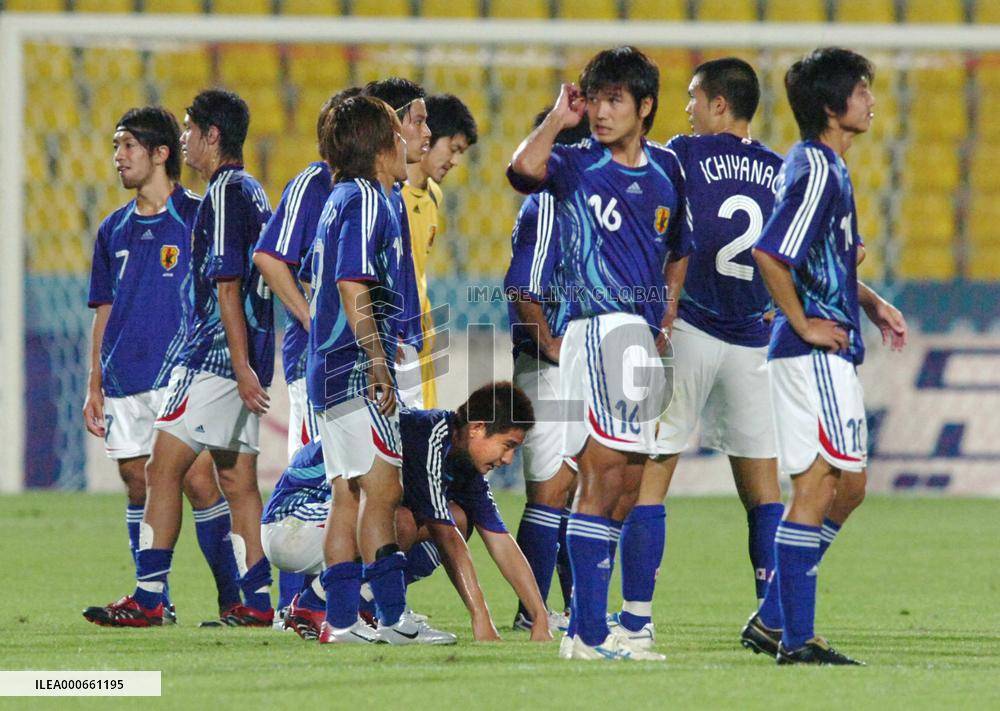 Japan crash out of soccer tourney

DOHA, Qatar - The Japanese squad looks dejected as the Under-21s crash out of the men's soccer tournament with a shock 2-1 defeat to North Korea at the Asian Games on Dec. 6 (Kyodo) Musoyama upsets Takanohana to set up showdown at summer sumo

TOKYO, Japan - Ozeki Musoyama (L) saddles yokozuna Takanohana (R) with his first loss of the Summer Grand Sumo Tournament in Tokyo on May 26, spoiling the yokozuna's chance to claim an early victory in the 15-day tourney and giving stablemate Musashimaru a chance to win it all on May 27. NISHINOMIYA, Japan - Ginoza high school of Okinawa Prefecture leads the parade of schools at Koshien Stadium in Hyogo Prefecture on March 25 to kick off the 73rd high school baseball national invitational tournament. A total of 34 schools will take part in the 11-day spring classic of Japanese high school sports. OSAKA, Japan - Ozeki Kaio and his supporters exult in the Tomozuna stable wrestler's championship in the Spring Grand Sumo Tournament that concluded on March 25. Kaio completed the 15-day meet at Osaka Prefectural Gymnasium with a 13-2 mark and can now look forward to a shot at sumo's ultimate rank of yokozuna with a triumph in the summer tourney in May. OSAKA, Japan - Ozeki Kaio bundles second-ranked maegashira Chiyotenzan out of the ring from behind at Osaka Prefectural Gymnasium on March 18 to preserve his 8-0 record and stay in pole position with seven days left at the Spring Grand Sumo Tournament. Kaio still top of the leaderboard at spring sumo+

OSAKA, Japan - Ozeki Kaio quickly locks onto the arm of top maegashira Kotoryu and dumps him out of the ring at Osaka Prefectural Gymnasium on March 16 for his sixth straight win of the 15-day tournament. Kaio preserved his unbeaten record six days into the Spring Grand Sumo Tournament, while yokozuna pair Takanohana and Musashimaru kept the pressure on the leader with their fifth wins. OSAKA, Japan - Ozeki Kaio (R) preserves his unbeaten record and takes sole possession of the lead by beating No. 1 maegashira Kyokutenho (1-4) March 15, a third of the way through the 15-day tourney at Osaka Prefectural Gymnasium.