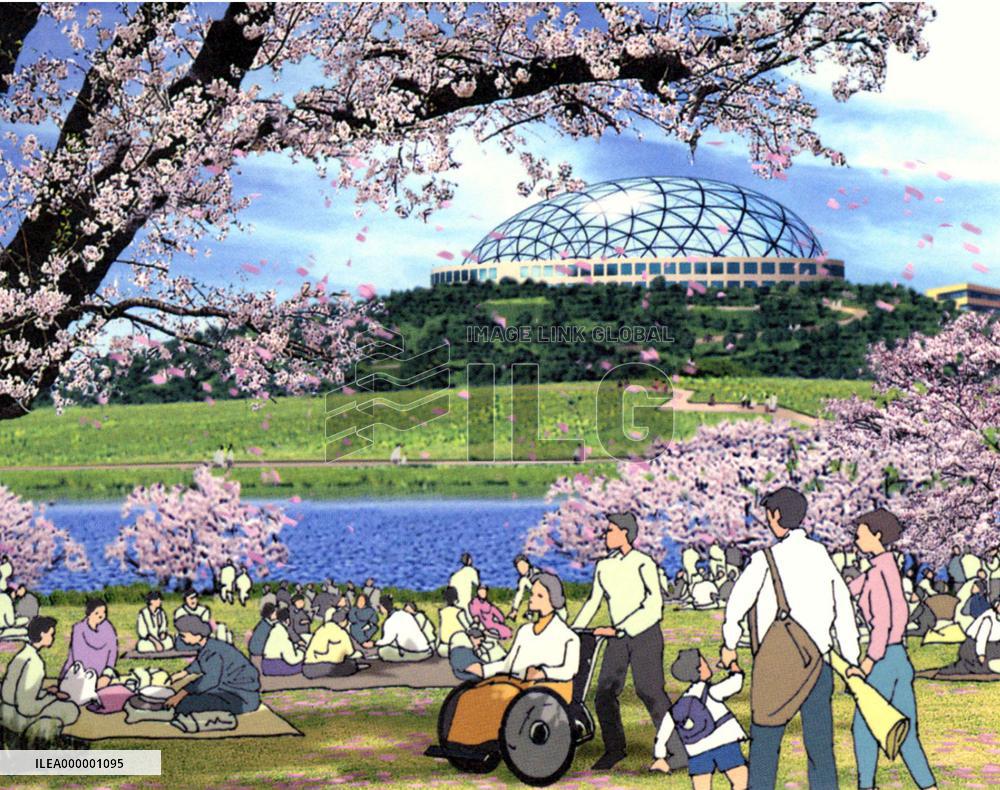 A dome-shaped parliament building is proposed by a government panel on relocating Japan's capital. A pamphlet released Jan. 20 by the panel shows a drawing of the Diet building and lower-level buildings in a rural environment. ==Kyodo NEW YORK, United States - The Empire State Building in New York City was lit up in red and white on the night of June 16, 2010 to mark the 150th anniversary of the arrival in the city of Japan's first diplomatic mission to the United States. The top part of the 443.2-meter skyscraper was lit up in the colors of the Japanese flag to honor the delegation sent by the Tokugawa shogunate government during the final years of the Edo period. (Kyodo) Japan has ''special'' role to play at Copenhagen and beyond: Ban

NEW YORK, United States - U.N. Secretary General Ban Ki Moon speaks to a group of reporters from Japanese news organizations on Dec. 10, 2009, ahead of his trip to Copenhagen, where he is scheduled to open the high-level segment of the meeting on Dec. 15. He said Japan has a ''special'' role to play at a climate change conference taking place in the Danish capital and beyond, as global leaders grapple with striking a deal in crafting a treaty to replace the 1997 Kyoto Protocol. (Kyodo) Japan calls on public for alertness, composure over swine flu

TOKYO, Japan - Prime Minister Taro Aso (R) addresses the first session of a government task force inside the parliament building in Tokyo on April 28 with Health, Labor and Welfare Minister Yoichi Masuzoe listening at left. The task force, headed by Aso, was set up following the World Health Organization's upgrading of its alert level on swine flu. (Kyodo) TOKYO, Japan - Two Tokyo metropolitan government employees hold fire extinguishers during a large-scale earthquake and fire disaster drill on Jan. 29 held at the local government building for the first time in 17 years. The employees were in a room on the 22nd floor which the local government deliberately filled with smoke. Around 6,000 people working in the main building huddled under their desks during the drill aimed at preparing for a temblor. (Kyodo) TOKYO, Japan - Two firefighters hose the Tokyo metropolitan government building in the Shinjuku district on Jan. 29 during a large-scale earthquake and fire disaster drill held at the local government building for the first time in 17 years. Around 6,000 people working in the main building huddled under their desks during the drill aimed at preparing for a temblor. (Kyodo) Panel to urge Japan, China to work together on environment

BEIJING, China - The seventh meeting of the New Japan-China Friendship 21st Century Committee ended two days of talks in Beijing on Jan. 28 aimed at compiling a list of recommendations for the two governments on ways to enhance ties. Yotaro Kobayashi (L), chief corporate adviser at Fuji Xerox Co., who headed the Japanese delegation, and Zheng Bijian (R), chair of the China Reform Forum, a nongovernmental academic group, met the press after the meeting. The committee will hold its last meeting to complete the list in Japan at the end of this year. (Kyodo) TOKYO, Japan - Health, Labor and Welfare Minister Yoichi Masuzoe speaks to reporters at the parliament building in Tokyo on Nov. 7 after the Osaka High Court called on the government and drug makers to reach a negotiated settlement of damages lawsuits filed by people infected with hepatitis-C through tainted blood products. (Kyodo) TOKYO, Japan - Tomoe Funayama, the lead counsel for the plaintiffs in civil lawsuits filed by former tunnel construction workers against the state seeking damages for pneumoconiosis, waves a settlement accord he signed with the chief counsel for the government in the lawsuits on June 18. The signing ceremony took place at the No. 1 Diet Members Building in Tokyo. (Kyodo) TOKYO, Japan - Katsutoshi Shimizu (R), a representative of buyers of condominiums developed by Huser Ltd. with fabricated quake-resistance data, speaks at a session of the House of Councillors Land, Infrastructure and Transport Committee on Jan. 19. Shimizu called on the government to extend support for reconstructing the defective buildings. (Kyodo) SHIZUOKA, Japan - Officials take part in the first disaster drill to prepare for a possible eruption of Mt. Fuji at the Shizuoka prefectural government building in the prefectural capital of Shizuoka on May 22. Mt. Fuji, an active volcano that straddles the border between Shizuoka and Yamanashi prefectures and is located about 100 kilometers southwest of Tokyo, has been the focus of attention in recent months due to low-frequency tremors detected beneath it since last fall.