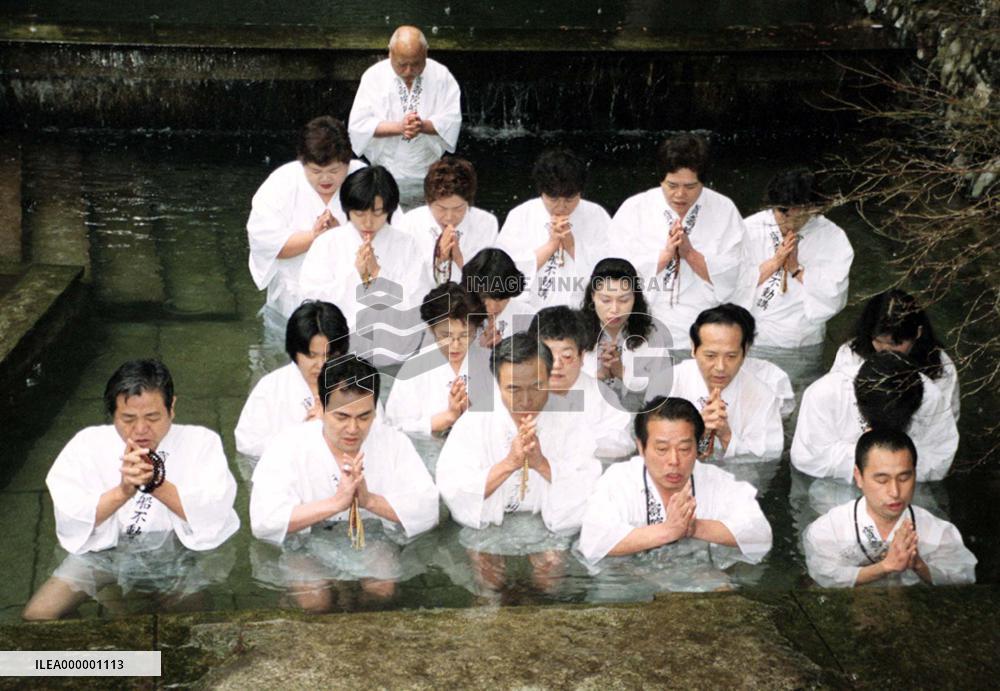 Midwinter ascetic practices begin Jan. 24 at the Okunoin precinct of the Koyasan Buddhist monastic complex in Wakayama Prefecture, western Japan. The photo shows believers who joined the training in snowy weather, chanting sutra in cold river water for 10 minutes to purify themselves from their earthly desires. The seasonal practices will last until early February. ==Kyodo NARITA, Japan - The annual talisman-burning rites are held at the Shinshoji Temple in Narita, Chiba Prefecture, where wooden talisman tablets are burned as a sign of gratitude for the protection accorded by the Japanese Buddhist deity Fudo in the past year. On Dec. 28, about 50,000 talisman tablets were burned in a ceremonial bonfire in the courts of Shinshoji Temple attended by some 20 Buddhist priests chanting Sutra. (Kyodo) HASHIMOTO, Japan - A group of young monks living on Mt. Koya in Wakayama Prefecture, western Japan, will give a series of performances of Buddhist music with actress Mari Natsuki in Poland beginning later this month. The Koyasan Shomyo-no-kai (Mt. Koya chanting troupe) members (file photo) will sing six songs with Natsuki performing a solo act during their Polish tour, which will include performances in the capital Warsaw on Oct. 28 and 29 and Kielce on Oct. 31.