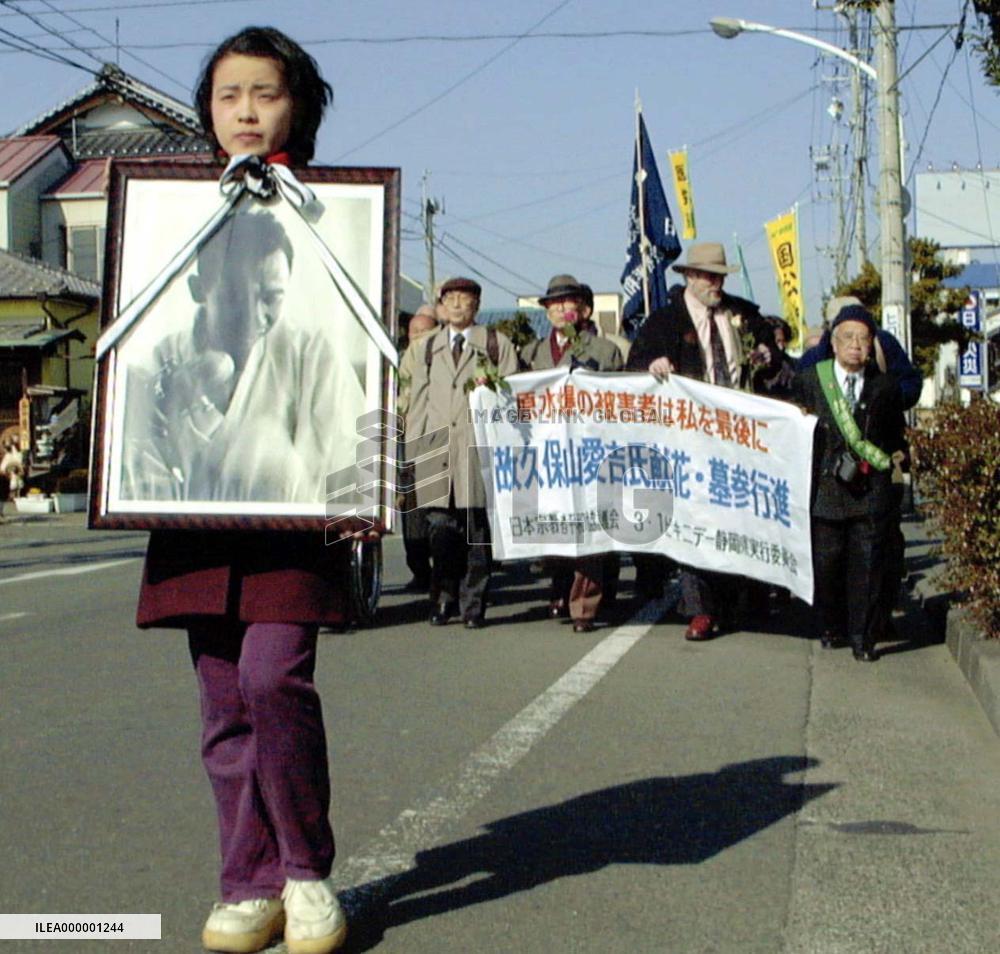 Holding a photo of Aikichi Kuboyama, who died of irradiation after a U.S. hydrogen bomb test at Bikini Atoll in the South Pacific in 1954, a woman and fellow antinuclear group members march in Yaizu, Shizuoka Prefecture, on March 1 to appeal for the abolition of nuclear weapons. Kuboyama was one of the crew members of the Japanese fishing boat Fukuryu Maru No. 5, that was exposed to radioactive fallout near the Bikini Atoll on the same day 45 years ago. ==Kyodo BANGKOK, Thailand - Family members of those killed in clashes between antigovernment protesters and security forces in the Thai capital Bangkok the previous day hold up photographs on April 11, 2010, of the victims during a memorial service held near Democracy Monument where the clashes occurred. More than 20 were killed and over 800 injured in Thailand's worst political violence in 18 years. (Kyodo) BANGKOK, Thailand - Family members of those killed in clashes between antigovernment protesters and security forces near Democracy Monument in the Thai capital Bangkok the previous day take part in a memorial service held April 11, 2010, near the clash site. More than 20 were killed and over 800 injured in Thailand's worst political violence in 18 years. (Kyodo) TOKYO, Japan - On Nov. 11, 2009, members of the press and spectators gather in front of JR Tokyo Station in Tokyo where Tatsuya Ichihashi, the suspect in the 2007 murder of British language school teacher Lindsay Hawker, was transferred from Osaka where he was arrested the previous day after spending two years and seven months on the run. Ichihashi, 30, had been wanted on a technical charge of abandoning the body of Hawker, who was 22 at the time of her death, at his apartment in Chiba Prefecture. (Kyodo) 3 rescued from capsized boat off Tokyo

KOZUSHIMA, Japan - The Japan Coast Guard finds the fishing boat Kofuku Maru No. 1 capsized in the sea near Hachijo Island off Tokyo on Oct. 28, 2009, four days after it went missing. Three crew members of the boat were rescued the same day from inside the hull but the captain was found dead and the other four are still missing. (Kyodo) NAGASAKI, Japan - The Daiei Maru No. 11 (C), with a fishing net covering half of its deck, is pulled up to the surface by a crane ship from a depth of some 80 meters off Hirado Island, Nagasaki Prefecture, on Sept. 22, 2009, where it sank on April 14 while heading to the East China Sea. The salvage work is being conducted with hopes of recovering the remains of 12 crew members who went missing in the accident. (Kyodo) SENDAI, Japan - One of the four crew members of the 19-ton tuna boat Kyoei Maru No. 21 is transported to a hospital in the city of Hachinohe, Aomori Pefecture, on May 20 after being rescued at sea off Hachinohe by helicopter. The two crew members of the ship were found drifting in a raft earlier in the day. (Kyodo) NAGASAKI, Japan - A lifeboat from the fishing ship Daiei Maru No. 11 is seen drifting off Hirado Island, Nagasaki Prefecture, on April 14 after the ship capsized and sank near there. Twelve of the 22 crew members aboard the ship went missing. (Kyodo) NAGASAKI, Japan - A Japan Coast Guard patrol ship searches off Hirado Island, Nagasaki Prefecture, on April 14 after the 135-ton fishing boat Daiei Maru No. 11 capsized and sank there. Twelve of the 22 crew members aboard the ship went missing. (Kyodo) Fishing boat, crew return to Tottori after seizure by Russia

TOTTORI, Japan - Crew members of the Japanese crab-fishing boat Yoshi Maru No. 38 disembark upon returning to Sakai Port on the Sea of Japan in Sakaiminato, Tottori Prefecture, on Feb. 9, two weeks after being seized by Russia in late January for allegedly fishing illegally in the Russian exclusive economic zone. (Kyodo) Agreement reached on release of fishermen detained by Russia

YONAGO, Japan - Shinsuke Iwata, president of the seafood processor Hiyoshi Suisan, speaks to reporters in the city of Sakaiminato, Tottori Prefecture, on Feb. 5. Iwata said his company has reached an agreement with Russian authorities on a release of all 10 crew members of the 122-ton, crab-fishing boat Yoshi Maru No. 38 detained in Russia. (Kyodo)