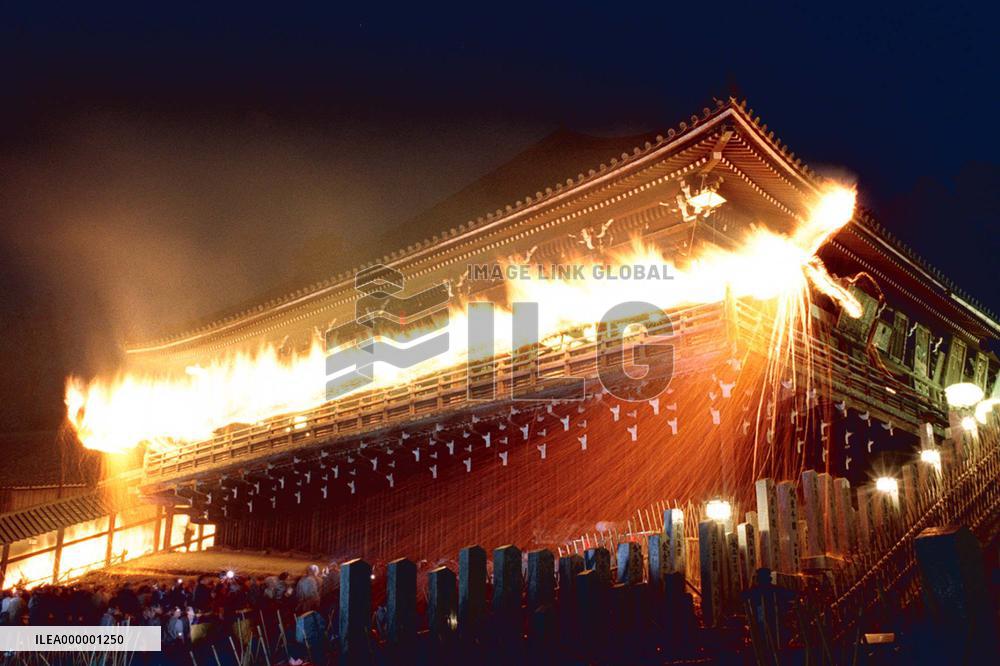 Todaiji Temple's Nigatsudo edifice in Nara is lit up by burning torches in the spring 'Omizutori' event that began March 1. Monks offer repentance to the sacred god of the edifice and wish for peace and good harvest in the tradition, which ends March 14 this year.

STORY: Annual art festival Notte Bianca celebrated in Valletta, Malta DATELINE: Oct. 2, 2022 LENGTH: 0:02:00 LOCATION: Valletta CATEGORY: CULTURE/SOCIETY SHOTLIST: 1 various of the event STORYLINE: Thousands of people visited Malta's capital Valletta on Saturday night for this year's Notte Bianca (white night) event, after a hiatus of two years due to the COVID-19 pandemic. Notte Bianca is one of Malta's biggest annual arts and culture festivals. For one special night, every first Saturday of October, the Valletta cityscape lights up with a spectacular celebration of the arts that is open to the public for free. Xinhua News Agency correspondents reporting from Valletta. (XHTV)

STORY: Annual airshow returns to skies over Southern California DATELINE: Oct. 2, 2022 LENGTH: 00:01:43 LOCATION: LOS ANGELES, U.S. CATEGORY: SOCIETY SHOTLIST: 1. various of the airshow 2. various of the attendees STORYLINE: The Pacific Airshow, one of the largest airshows in the United States, returned to the skies over Southern California this weekend, featuring demonstrations by military aviators and civilian performers. The annual airshow kicked off at Huntington Beach, a seaside city in Orange County, on Friday and will run through Sunday. This year's event will be headlined by the United States Air Force Air Demonstration Squadron, known as the "Thunderbirds," and the Canadian Forces air display team, known as the "Snowbirds." "Thunderbirds" will perform new synchronized and exhilarating maneuvers that include a six-ship display, something new for the performance squadron, according to the airshow's website. Additional performances will include various types of aircraft, including F-35C, F-16, T-3

STORY: Amman Jazz Festival held in Jordan DATELINE: Sept. 29, 2022 LENGTH: 00:03:35 LOCATION: Amman CATEGORY: CULTURE SHOTLIST: 1. various shots of the festival and the audience 2. SOUNDBITE 1 (English): LAMA HAZBOUN, Festival director 3. SOUNDBITE 2 (English): AHED IBRAHIM, Attendee STORYLINE: The 10th Amman Jazz Festival is celebrated in the Jordanian capital with vibrant and diverse programs. According to the event's organizer, the week-long festival will present a selection of live performances by artists and musicians from Jordan and other countries. In addition to the main program, this year's "Music on Stairways" moves the concerts outside the capital to the nearby beautiful town of Fuheis, aiming to transform open public areas to a stage for music. SOUNDBITE 1 (English): LAMA HAZBOUN, Festival director "We are celebrating the 10th year this year. We are very excited. It is going to be under the patronage of the Ministry of Culture and we have the support of the Jordan Tourism Board and the Minis

STORY: National Exhibition and Convention Center in Shanghai ready to hold 5th CIIE DATELINE: Sept. 26, 2022 LENGTH: 00:01:12 LOCATION: SHANGHAI, China CATEGORY: ECONOMY SHOTLIST: 1. aerial view of National Exhibition and Convention Center (NECC) in Shanghai 2. various of exhibition 3. various of interior of NECC 4. various of a production line STORYLINE: The National Exhibition and Convention Center (NECC) in Shanghai is ready to hold the fifth China International Import Expo (CIIE) scheduled for early November. More than 280 Fortune 500 companies and industry-leading enterprises have confirmed their participation in this year's CIIE, with nearly 90 percent of them repeat participants of the event. With a unique four-leaf-clover shape, the NECC covers an area of more than 1.5 million square meters. It has 15 huge exhibition halls, each covering nearly 30,000 square meters, approximately the size of four football fields. According to Ministry of Commerce statistics, from 2018 to 2021, exhibitors at the (220925) -- VANCOUVER, Sept. 25, 2022 (Xinhua) -- A handmade electric guitar is displayed at the Vancouver International Guitar Festival in Vancouver, Canada, on Sept. 24, 2022. After a two-year suspension due to the pandemic, the event returned to Vancouver this Saturday and Sunday, featuring more than 60 guitar makers from Canada, the United States, and European countries. (Photo by Liang Sen/Xinhua) (220925) -- VANCOUVER, Sept. 25, 2022 (Xinhua) -- An exhibitor presents a handmade guitar at the Vancouver International Guitar Festival in Vancouver, Canada, on Sept. 24, 2022. After a two-year suspension due to the pandemic, the event returned to Vancouver this Saturday and Sunday, featuring more than 60 guitar makers from Canada, the United States, and European countries. (Photo by Liang Sen/Xinhua)